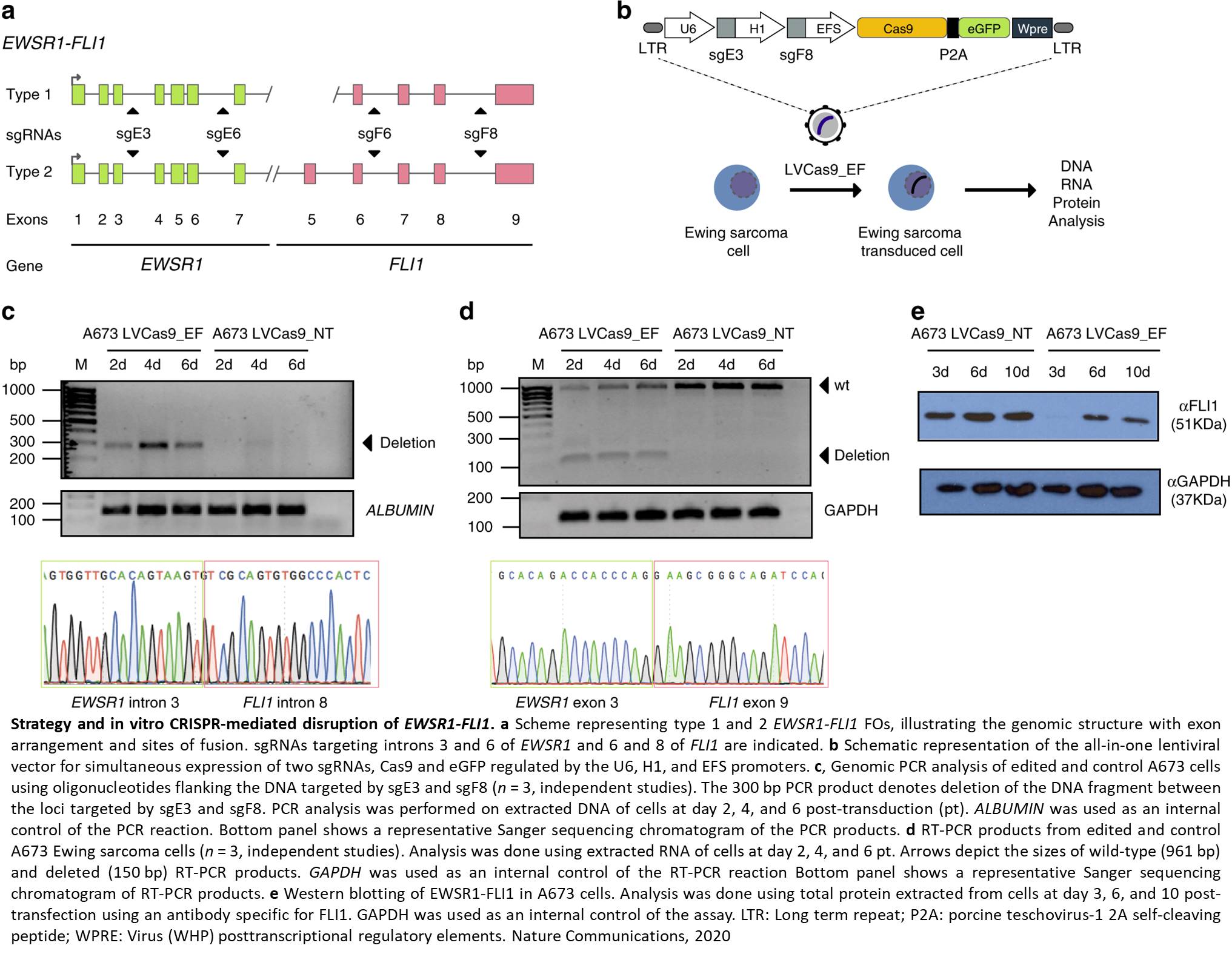 The CRISPR/Cas9 gene-editing tool is one of the most promising approaches to advancing treatments of genetic diseases—including cancer—an area of research where progress is constantly being made. Now, the researchers have taken a step forward by effectively applying this technology to eliminate so-called fusion genes, which in the future could open the door to the development of cancer therapies that specifically destroy tumors without affecting healthy cells. The paper is published in Nature Communications.

Fusion genes are the abnormal result of an incorrect joining of DNA fragments that come from two different genes, an event that occurs by accident during the process of cell division. If the cell cannot benefit from this error, it will die and the fusion genes will be eliminated. But when the error results in a reproductive or survival advantage, the carrier cell will multiply and the fusion genes and the proteins they encode thus become an event triggering tumor formation.

"Many chromosomal rearrangements and the fusion genes they produce are at the origin of childhood sarcomas and leukaemias," explains the lead co-author of the study. Fusion genes are also found in among others prostate, breast, lung and brain tumors: in total, in up to 20% of all cancers.

Because they are only present in tumor cells, fusion genes attract a great deal of interest among the scientific community because they are highly specific therapeutic targets, and attacking them only affects the tumor and has no effect on healthy cells.

And this is where the CRISPR technology comes into play. With this technology, researchers can target specific sequences of the genome and, as if using molecular scissors, cut and paste DNA fragments and thus modify the genome in a controlled way. In the study carried out by the team, the researchers worked with cell lines and mouse models of Ewing's sarcoma and chronic myeloid leukemia, in which they managed to eliminate the tumor cells by cutting out the fusion genes causing the tumor.

This is the first time that CRISPR has been successfully applied for the selective elimination of fusion genes in tumor cells. Earlier strategies by other research teams were based on modifying the junction between the two genes involved in the fusion to introduce a DNA sequence that induces cell death. The problem is that the introduction of foreign sequences has proven to be very ineffective in eliminating tumors.

The researchers used a completely different approach to induce the tumor cell to destroy itself. "Our strategy was to make two cuts in introns, non-coding regions of a gene, located at both ends of the fusion gene," explains co-author of the paper. "In that way, in trying to repair those breaks on its own, the cell will join the cut ends which will result in the complete elimination of the fusion gene located in the middle". As this gene is essential for the survival of the cell, this repair automatically causes the death of the tumor cell.

"Our next steps will be to carry out more studies to analyze the safety and efficiency of our approach," continues the co-author. "These steps are essential to know if our approach can be translated in the future into a potential clinical treatment. Furthermore, we will study whether our strategy, which we have already seen works in Ewing's sarcoma and chronic myeloid leukemia, is also effective in other types of cancer caused by fusion genes and for which there are currently no effective therapies," the author concludes.