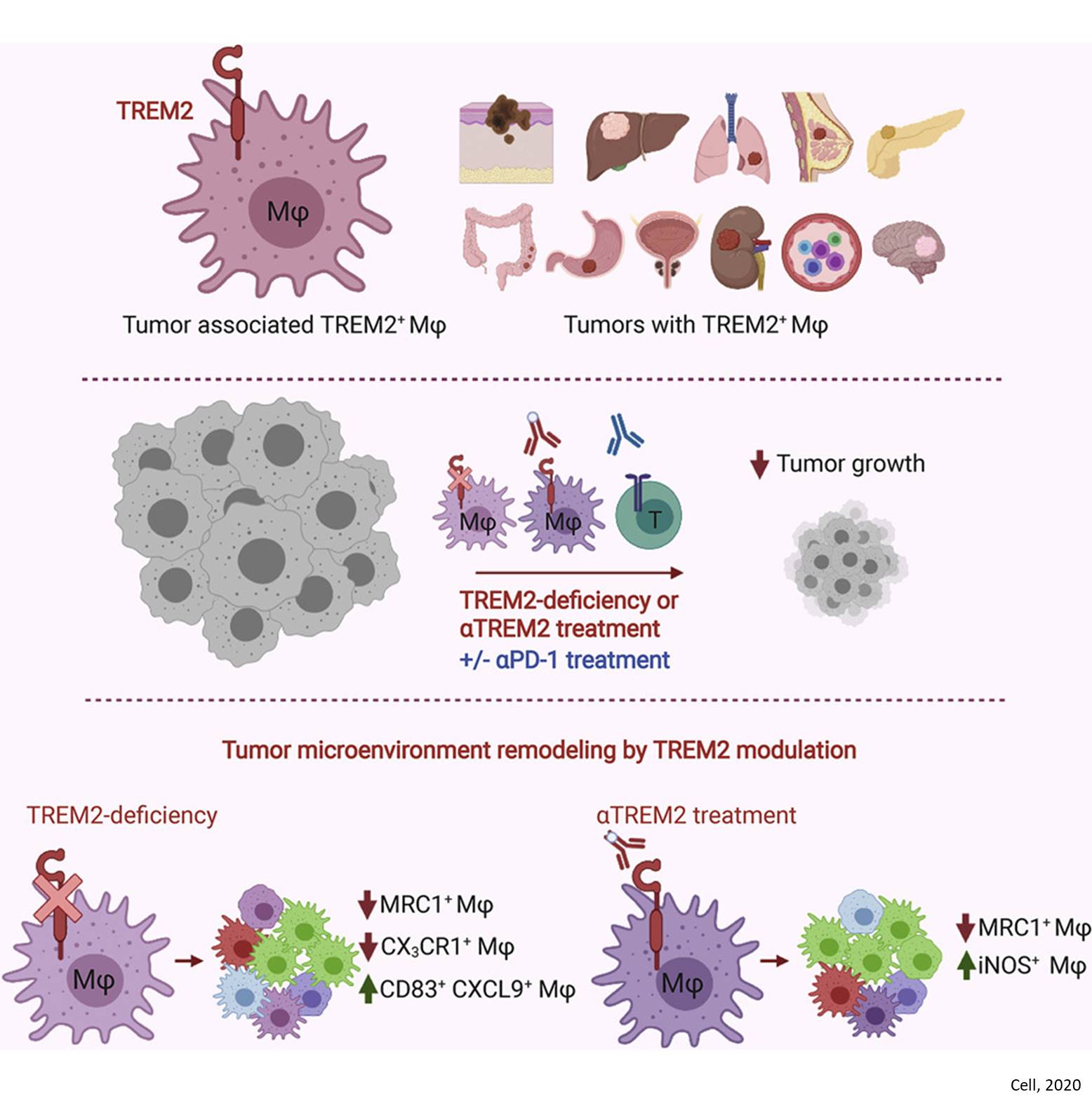 Immunotherapy has revolutionized cancer treatment by stimulating the patient's own immune system to attack cancer cells, yielding remarkably quick and complete remission in some cases. But such drugs work for less than a quarter of patients because tumors are notoriously adept at evading immune assault.

A new study in mice by researchers has shown that the effects of a standard immunotherapy drug can be enhanced by blocking the protein TREM2, resulting in complete elimination of tumors. The findings, which are published in the journal Cell, point to a potential new way to unlock the power of immunotherapy for more cancer patients.

"Essentially, we have found a new tool to enhance tumor immunotherapy," said senior author. "An antibody against TREM2 alone reduces the growth of certain tumors, and when we combine it with an immunotherapy drug, we see total rejection of the tumor. The nice thing is that some anti-TREM2 antibodies are already in clinical trials for another disease. We have to do more work in animal models to verify these results, but if those work, we'd be able to move into clinical trials fairly easily because there are already a number of antibodies available."

T cells, a kind of immune cell, have the ability to detect and destroy tumor cells. To survive, tumors create a suppressive immune environment in and around themselves that keeps T cells subdued. A type of immunotherapy known as checkpoint inhibition wakes T cells from their quiescence so they can begin attacking the tumor. But if the tumor environment is still immunosuppressive, checkpoint inhibition alone may not be enough to eliminate the tumor.

"When we looked at where TREM2 is found in the body, we found that it is expressed at high levels inside the tumor and not outside of the tumor," the senior author said. "So it's actually an ideal target, because if you engage TREM2, you'll have little effect on peripheral tissue."

The authors set out to determine whether inhibiting TREM2 could reduce immunosuppression and boost the tumor-killing powers of T cells.

As part of this study, the researchers injected cancerous cells into mice to induce the development of a sarcoma. The mice were divided into four groups. In one group, the mice received an antibody that blocked TREM2; in another group, a checkpoint inhibitor; in the third group, both; and the fourth group, placebo. In the mice that received only placebo, the sarcomas grew steadily. In the mice that received the TREM2 antibody or the checkpoint inhibitor alone, the tumors grew more slowly and plateaued or, in a few cases, disappeared. But all of the mice that received both antibodies rejected the tumors completely. The researchers repeated the experiment using a colorectal cancer cell line with similarly impressive results.

The researchers analyzed immune cells in the tumors of the mice treated with the TREM2 antibody alone. They found that suppressive macrophages were largely missing and that T cells were plentiful and active, indicating that blocking TREM2 is an effective means of boosting anti-tumor T cell activity.

Further experiments revealed that macrophages with TREM2 are found in many kinds of cancers. To assess the relationship between TREM2 expression and clinical outcomes, the researchers turned to The Cancer Genome Atlas, a publicly available database of cancer genetics jointly maintained by the National Cancer Institute and the National Human Genome Research Institute. They found that higher levels of TREM2 correlated with shorter survival in both colorectal cancer and breast cancer.

The researchers are now expanding their study of TREM2 to other kinds of cancers to see whether TREM2 inhibition is a promising strategy for a range of cancers.

"We saw that TREM2 is expressed on over 200 cases of human cancers and different subtypes, but we have only tested models of the colon, sarcoma and breast, so there are other models to test," the author said. "And then we also have a mouse model with a human version of TREM2."

Added the senior author: "The next step is to do the animal model using the human antibody. And then if that works, we'd be ready, I think, to go into a clinical trial."