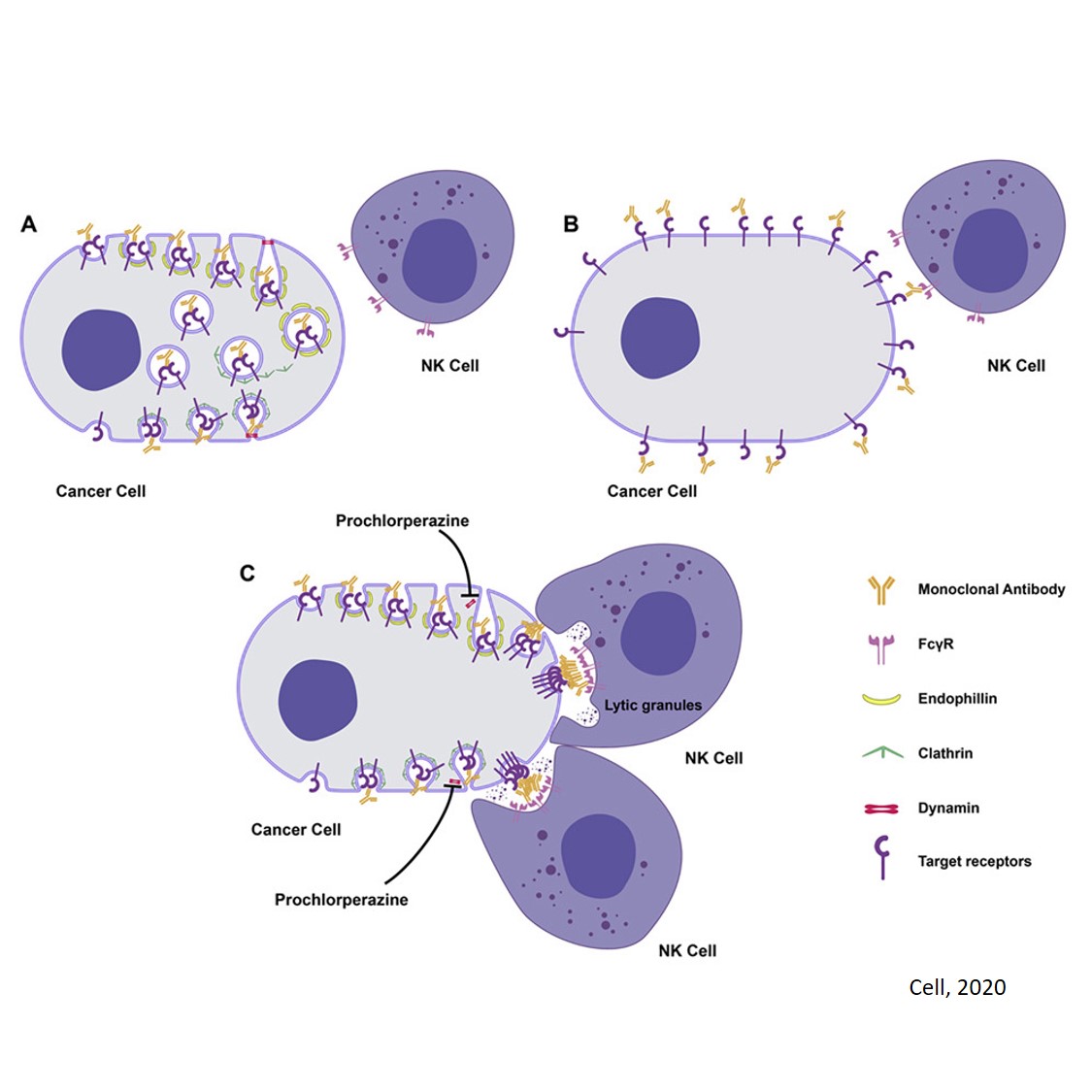 A drug that is already clinically available for the treatment of nausea and psychosis, called prochlorperazine (PCZ), inhibits the internalization of receptors on the surface of tumor cells, thereby increasing the ability of anticancer antibodies to bind to the receptors and mount more effective immune responses. PCZ enhanced the ability of anticancer antibodies to reduce tumor growth in mice, by temporarily increasing the clustering of a receptor targeted by anticancer antibodies on the surface of tumor cells. Temporary treatment of cancer patients with PCZ similarly resulted in receptor clustering on tumor cells inside of patients. The work appears in the journal Cell.

In addition to treating nausea and psychosis, PCZ is currently used in laboratory studies as an inhibitor of endocytosis, a process by which substances are brought into the cell. The temporary inhibition of endocytosis via molecules such as PCZ has been proposed for numerous clinical applications, including control of viral infection, epilepsy, and chronic kidney disease.

To help move this approach closer to clinical translation, the team recently developed an imaging method to reliably measure endocytosis in humans. When they analyzed tumor samples from patients with squamous cell carcinoma, they found that a decrease in endocytosis of a protein called epidermal growth factor receptor (EGFR) was associated with better clinical responses to the cancer drug cetuximab, an antibody that binds to and inhibits EGFR. "We found that if we stopped the drug targets getting inside the cells by inhibiting the uptake process, called endocytosis, we got a really big immune response against the tumors in mice," the author says.

"This led to the concept that temporarily halting endocytosis of receptors that are the targets of monoclonal antibody therapies may be used to improve clinical outcomes," the author says. Their findings suggested that endocytosis inhibition in humans, which increases the clustering of EGFR on the surface of tumor cells, thereby increasing the availability of the receptor for binding to the antibody, should lead to improved outcomes for patients treated with certain therapeutic antibodies.
Exploring this idea in the new study with a different therapeutic antibody, the team showed that PCZ improved the immune responses of tumor cells to cetuximab. In mice with cancer, combination therapy with PCZ and cetuximab reversed resistance to cetuximab therapy and inhibited tumor growth more than either treatment alone. Similarly, combination therapy with PCZ and avelumab--an anticancer antibody that inhibits a protein called programmed death ligand 1 (PD-L1)--inhibited tumor growth in mice more than either treatment alone. "These findings highlight the crucial role of availability and persistence of the molecule targeted by the therapeutic antibody at the cell surface of tumor cells," the author says.

To begin to test the safety of this approach in humans, the team carried out an open-label, uncontrolled, single-center proof-of-concept study in which a single dose of PCZ was intravenously administered to patients with squamous cell carcinoma of the head and neck. Tumor biopsies were taken before and after PCZ treatment. Analysis of results from four patients showed that PCZ increased cetuximab binding sites and the clustering of EGFR on the surface of tumor cells. "As far as we can tell, this was the first verified manipulation of endocytosis in humans," the author says.

Moreover, tumor cells became more homogenous with regard to the availability of cetuximab binding sites. "In our patients, we could see surface target on some tumor cells exposed and not others. After PCZ, they all had drug target on their surface, so it fixed the heterogeneity problem," the author says. "By overcoming the heterogeneity of drug target availability that frequently characterizes poorly responsive or resistant tumors, clinical application of PCZ may considerably improve the clinical benefit of therapeutic antibodies."

PCZ is already prescribed chronically in some people for the management of psychosis. Unfortunately, over a lifetime of PCZ use, patients may show an increased incidence of metabolic syndrome. But, in this case, the proposed use of the drug by the authors is short term, and the endocytosis inhibition is reversible, negating the side effects of chronic use. "It turns out PCZ at the high concentration we use it only stops trafficking for about four hours," the author says. "This is enough time to line up the immune cells when an antibody drug is used against the tumor cells," but theoretically not enough time to be really toxic. Further clinical studies are underway to fully test whether this approach can be safely used in people.

From a broader perspective, the study sets the stage for testing PCZ in clinical trials to treat epilepsy or chronic kidney disease or to improve the effectiveness of anti-HIV antibodies. According to the authors, the drug might also be used as a frontline medicine to prevent or reduce infections by highly pathogenic viruses such as dengue or Ebola.

Currently, the authors are conducting a phase IB safety trial to test the combination of cetuximab and PCZ in head and neck cancer, triple-negative breast cancer and adenoid cystic carcinoma. "We need to show efficacy through trials first, but if it works, we could use it to improve therapies in lots of different cancers and also other uses," the author says. "We are hoping once the idea is out there, lots of clever people will run with the idea and make it work even better." Best time to exercise to get the most rejuvenating results