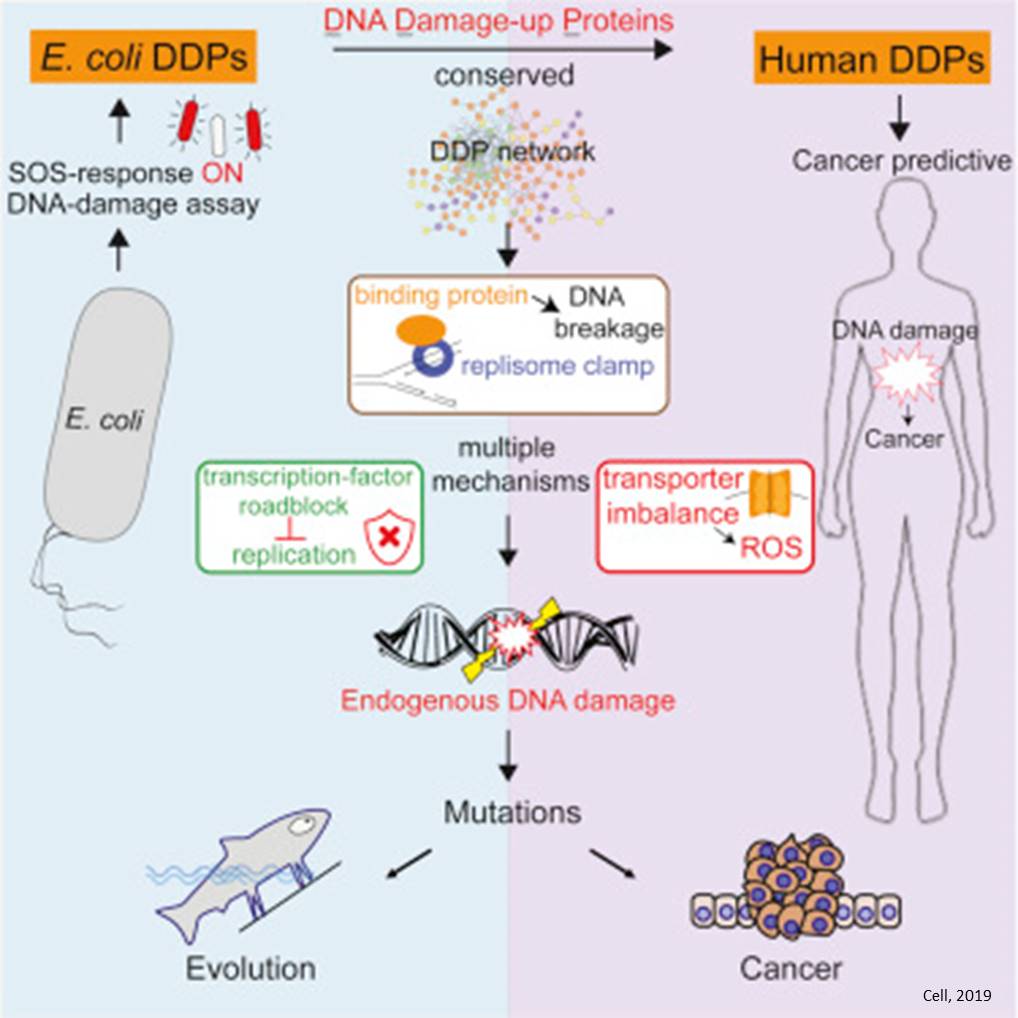 A team of researchers has applied an unconventional approach that used bacteria to discover human proteins that can lead to DNA damage and promote cancer. Reported in the journal Cell, the study also proposes biological mechanisms by which these proteins can cause damage to DNA, opening possibilities for future cancer treatments.

"Our cells make protein carcinogens," said co-corresponding author. "Cancer is a disease of mutations. A normal cell that has accumulated several mutations in particular genes becomes likely to turn into a cancer cell."

Mutations that cause cancer can be the result of DNA damage. External factors such as tobacco smoke and sunlight can damage DNA, but most DNA damage seems to result from events that occur within cells and is mediated by cellular components, including proteins. Despite the importance of these events, they have not been studied extensively.

"One way proteins can cause DNA damage is by being overproduced, which is a relatively frequent cellular event," said the author. "In this study, we set out to uncover proteins that, when overproduced by the cell, cause damage to DNA in ways that can lead to cancer."

To uncover these DNA "damage-up" proteins, the researchers took an unconventional approach. They searched for proteins that promote DNA damage in human cells by looking at proteins that, when overproduced, would cause DNA damage in the bacterium E. coli.

"Although bacteria and people are different, their basic biological processes are similar, so with this approach we thought we might find common mechanisms of DNA damage that could be relevant to cancer," the author said.

The researchers genetically modified bacteria so they would fluoresce red when DNA was damaged. Then, they overexpressed each of the 4,000 genes present in E coli individually and determined which ones made bacteria glow red.

"We uncovered an extensive and varied network of proteins that, when overproduced, alter cells in ways that lead to DNA damage," the author said. "Some of these proteins are, as expected, involved in DNA processing or repair, but, surprisingly, most are not directly connected to DNA. For instance, some of the DNA damage-up proteins participate in the transport of molecules across the cell membrane."

When the researchers looked for human protein relatives of the DNA "damage-up" proteins they had found in bacteria, they identified 284. Interestingly, they determined that these human proteins are linked to cancer more often than random sets of proteins. In addition, the proteins' RNAs, an indicator of protein production, predicted mutagenesis in tumors and poor patient prognosis. When the researchers overproduced these proteins in human cells in the lab, half of the proteins triggered DNA damage and mutation.

"We showed that E. coli can help to identify DNA damage-up proteins and mechanisms of action in human cells quickly and inexpensively. Some of the proteins and their mechanisms were known to be involved in cancer, but many others were not suspected of being in the cancer-causing list," said another co-corresponding author.