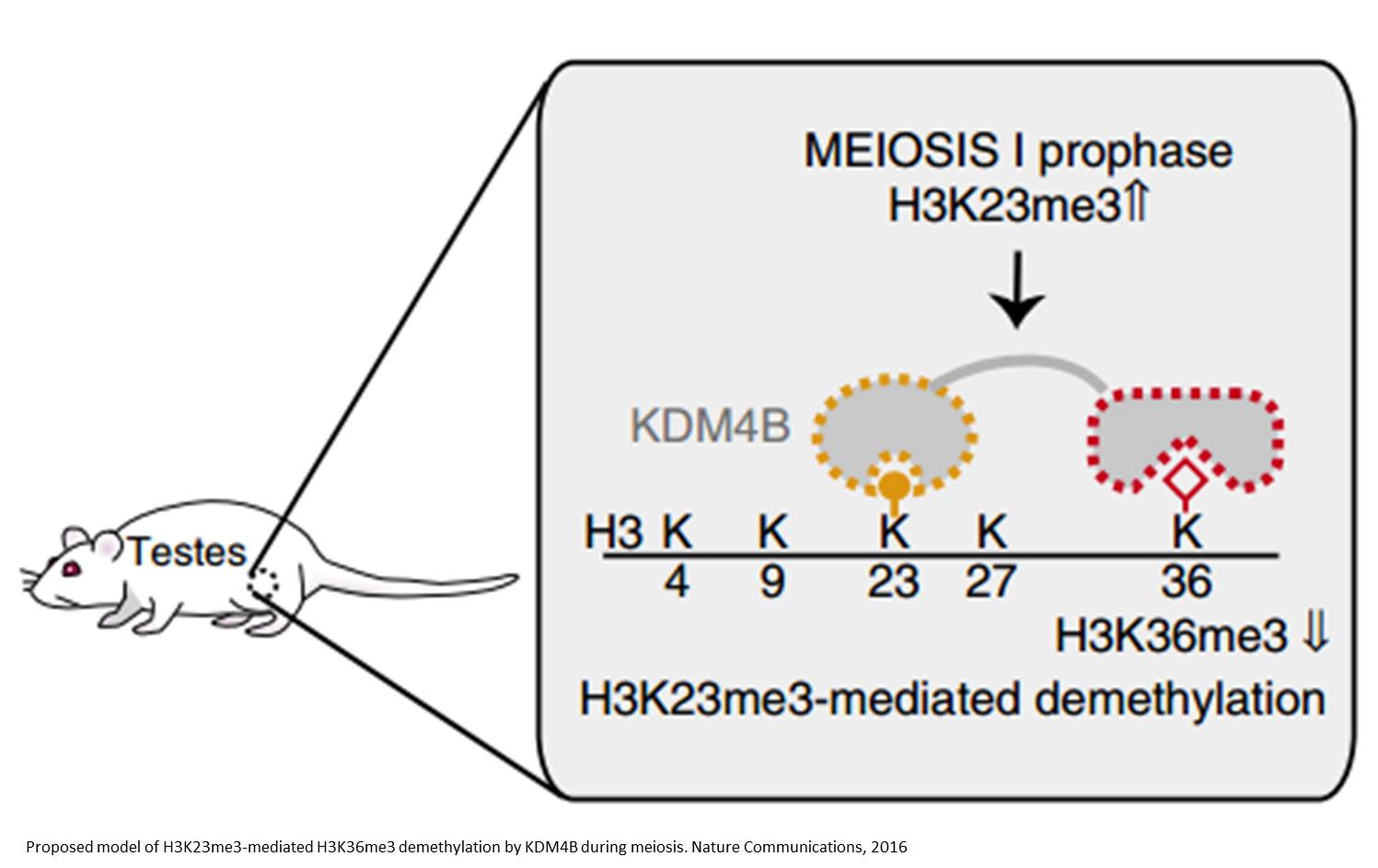 To "turn off" particular regions of genes or protect them from damage, DNA strands can wrap around small proteins, called histones, keeping out all but the most specialized molecular machinery. Now, new research shows how an enzyme called KDM4B "reads" one and "erases" another so-called epigenetic mark on a single histone protein during the generation of sex cells in mice. The researchers say the finding may one day shed light on some cases of infertility and cancer.

Histones are frequently controlled through small chemical "tags," especially methyl groups, which can be attached to and detached from specific spots on histone proteins. To advance its understanding of this process, researchers had previously turned to a one-celled organism, Tetrahymena thermophila, with an unusual trait: It has not one but two nuclei. The DNA in one nucleus is active and used for making proteins, while the DNA in the other is "silent" except during mating. That research revealed a new site for methyl groups on one histone. That spot, a lysine known as H3K23, has little to no methyl tags in active Tetrahymena nuclei but is loaded up with three methyl groups (H3K23me3) in "mating nuclei" undergoing early meiosis, the special version of cell division that creates sex cells.

In those experiments on Tetrahymena, the team learned that H3K23me3 appears in regions of the genome that should never be cut by enzymes during meiosis. DNA cuts normally occur during meiosis to allow for the mixing of genetic material and the proper sorting out of chromosomes in dividing cells, so H3K23me3 could protect nearby regions of the genome by "taping them up" so they can't be accessed.

In a hunt for what controls that part of the process, researchers developed a way to find out which proteins bind to which histone tags. Specifically, they identified a family of three similar enzymes called lysine demethylases, or KDM4s, which have been implicated in the development of some cancers in humans. KDM4A binds H3K23me3 plus two other histone tags and KDM4C binds another histone tag, but KDM4B binds only H3K23me3.

While KDM4B's structure proved elusive, the scientists were able to figure out the structure of KDM4A bound to H3K23me3. By comparing the differences between the KDM4s and by tweaking three of KDM4A's amino acid building blocks to make it act like KDM4B, the scientists report they were able to learn the basis for the binding preferences of all three KDM4s.

To that end, biochemical tests revealed that after KDM4B "reads" H3K23me3, it "erases" the methyl groups from a nearby lysine, H3K36me3. The researchers say that more work is needed to understand the significance of this rare combination of activities, but the senior author speculates that the "demethylation" -- that is, removing the epigenetic marks -- of H3K36 helps to "tape up," silence and protect nearby DNA.

To see if H3K23me3 plays a role in mammalian reproduction, the group  looked for its prevalence in rodents and found it and KDM4B to be increased in immature sperm undergoing early meiosis. (Since early meiosis occurs in females as they develop in the womb, the team was unable to examine immature eggs.)

"While our experiments offer no proof that defects in the KDM4B-H3K23me3 interaction cause infertility in mammals, all of the signs point in that direction," says the senior author, "and we definitely plan to study it further."