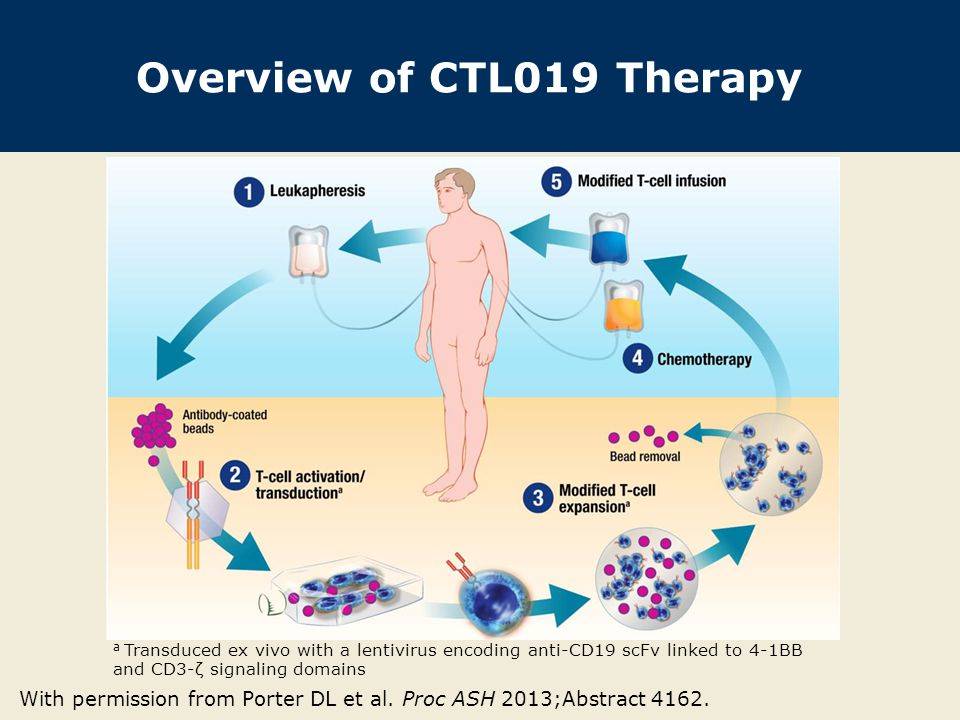 In a landmark decision for the field of cancer immunotherapy, the U.S. Food and Drug Administration (FDA) approved a personalized cellular therapy developed by the University of Pennsylvania and Children’s Hospital of Philadelphia (CHOP) for the treatment of patients up to 25 years of age with B-cell precursor acute lymphoblastic leukemia (ALL) that is refractory or in second or later relapse.

The approval was granted to Novartis for the chimeric antigen receptor (CAR) T-cell therapy, Kymriah™ (tisagenlecleucel, formerly CTL019). In 2012, Penn and Novartis entered into a global collaboration to further research, develop and commercialize Kymriah and other CAR-T cell therapies for the treatment of cancers. Kymriah is the first therapy based on gene transfer approved by the FDA.

Kymriah is expected to be available through a network of certified treatment centers throughout the United States.

"We delivered engineered T-cell therapy at CHOP for the first pediatric patient in the world, Emily Whitehead, who was only six years old when her leukemia stopped responding to conventional treatments. Emily’s cancer remains in remission, and in larger trials, we’re seeing overall remission rates over 80 percent, which is a remarkable improvement upon previous treatment success rates,” said lead investigator.

The new treatment modifies patients’ own immune T cells, which are collected and reprogrammed at the Novartis manufacturing facility to potentially seek and destroy the patients’ leukemia cells. After being infused back into patients’ bodies, these newly built “hunter” cells both multiply and attack, targeting cells that express a protein called CD19. Tests reveal that the army of hunter cells can grow to more than 10,000 new cells for each single engineered cell patients receive, producing high remission rates in completely refractory leukemia – and can survive in the body for years.

CTL019 was first tested at Penn in 2010, in adult patients with advanced chronic lymphocytic leukemia (CLL). In 2012, CHOP became the first institution to investigate Kymriah in pediatric patients with ALL, the most common childhood cancer. About 20 percent of the 3,500 pediatric and young adult patients diagnosed every year with ALL in the United States relapse or do not respond to conventional treatment.

Those early-stage clinical trials, in which more than 90 percent of patients achieved a complete remission one month after receiving the therapy, led to a global registration trial in 2015, involving 68 children and young adults with advanced ALL treated at 25 centers across the world. Eighty-three percent of the patients who received a single dose of their own engineered cells achieved a complete remission.

In July 2017, an FDA advisory panel unanimously recommended approval of the therapy, paving the way for today’s FDA approval. After presentation of trial data and testimony from families whose children have received the therapy, one expert on the panel said this was “the most exciting thing I’ve seen in my lifetime.”

Many patients in the ALL trials experienced a side effect called cytokine release syndrome (CRS) including grade 3 or grade 4, which includes varying degrees of flu-like symptoms, with high fevers, nausea, and muscle pain, and temporary neurologic symptoms, including delirium, but also low blood pressure and breathing difficulties requiring ICU-level care in the most severe cases. Eighteen percent of patients experienced grade 3 or grade 4 neurologic events. Patients were treated with the immunosuppressant drug tocilizumab or short courses of steroids to combat the symptoms.

Novartis will create a registry to follow patients for 15 years after being treated to monitor their progress and any potential, future side effects.

Other trials with CTL019 therapy are also underway in the Abramson Cancer Center for adult ALL patients and those with CLL and non-Hodgkin lymphoma. Penn and Novartis are also investigating the next generation of CAR therapies for multiple myeloma, and for solid tumors, through trials in glioblastoma, mesothelioma, and ovarian and pancreatic cancer. Other CAR trials at Penn are exploring the technique for prostate cancer, melanoma, and triple-negative breast cancer.