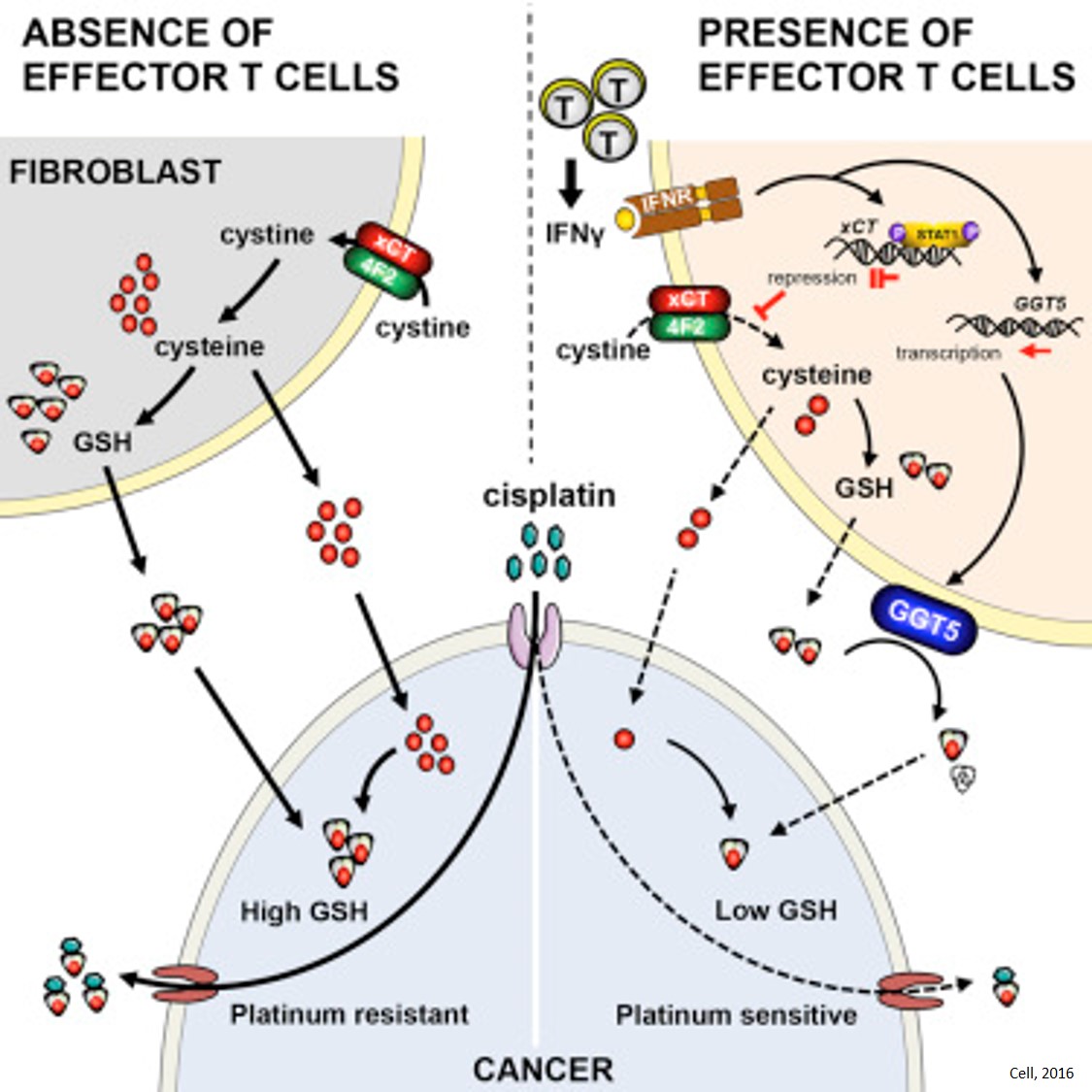 "Ovarian cancer is often diagnosed at late stages, so chemotherapy is a key part of treatment. Most patients will respond to it at first, but everybody develops chemoresistance. And that's when ovarian cancer becomes deadly," says study author.

Researchers looked at tissue samples from ovarian cancer patients. They separated the cells by type to study the tumor microenvironment in cells and in mice. They also linked their findings back to actual patient outcomes.

Ovarian cancer is typically treated with cisplatin, a platinum-based chemotherapy. The researchers found that fibroblasts blocked platinum. These cells prevented platinum from accumulating in the tumor and protected tumor cells from being killed off by cisplatin. Authors demonstrate that glutathione and cysteine released by fibroblasts contribute to this resistance.

Immune T cells, on the other hand, overruled the protection of the fibroblasts. CD8+ T cells abolish the resistance by altering glutathione and cystine metabolism in fibroblasts. CD8+ T-cell-derived interferon (IFN)γ controls fibroblast glutathione and cysteine through upregulation of gamma-glutamyltransferases and transcriptional repression of system xc− cystine and glutamate antiporter via the JAK/STAT1 pathway.

Thus, presence of stromal fibroblasts and CD8+ T cells is negatively and positively associated with ovarian cancer patient survival, respectively.  By boosting the immune T cells, the researchers were able to overcome the chemotherapy resistance in mouse models. They used interferon, a type of small protein, to manipulate the pathways involved in cisplatin.

"T cells are the soldiers of the immune system. We already know that if you have a lot of T cells in a tumor, you have better outcomes. Now we see that the immune system can also impact chemotherapy resistance," says study author.

The researchers suggest that combining chemotherapy with immunotherapy may be effective against ovarian cancer. PD-L1 and PD-1 pathway blockers are FDA-approved treatments in some cancers, although not ovarian cancer.

"We can imagine re-educating the fibroblasts and tumor cells with immune T cells after chemoresistance develops," author says. These findings, reported in Cell, suggest a whole different way of thinking about chemotherapy resistance - and the potential to harness immunotherapy drugs to treat ovarian cancer.