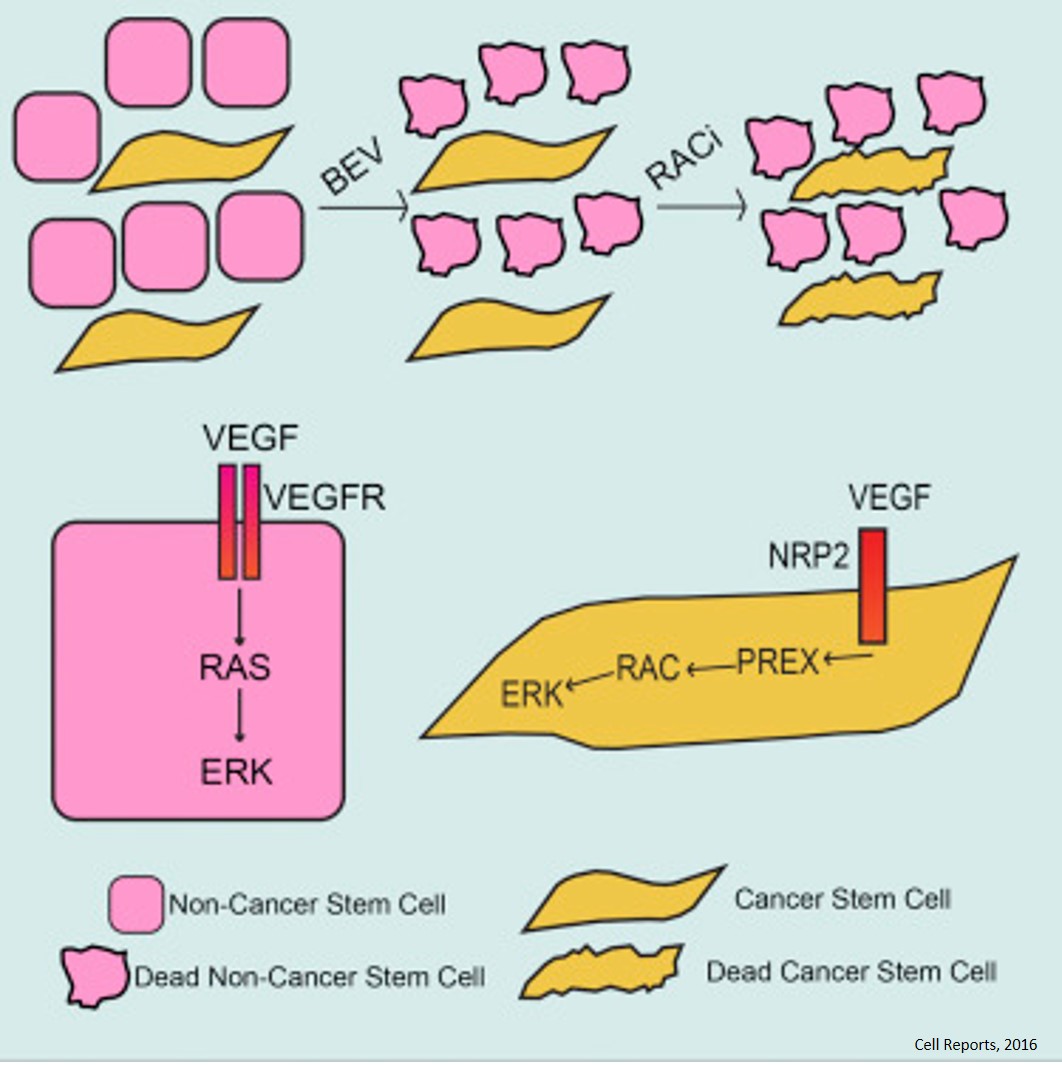 Expression of VEGF is elevated in aggressive prostate cancer and a recent meta-analysis identified high VEGF expression as a prognostic factor for poor overall survival in men with prostate cancer. These and other data indicate that VEGF and VEGF receptors are feasible therapeutic targets.

In fact, bevacizumab, a humanized VEGF antibody that blocks VEGF interactions with its tyrosine kinase receptors (VEGFRs), and sunitinib, an inhibitor of VEGFRs and other receptors, have been used in clinical trials of prostate cancer patients. These trials did not yield a significant survival advantage, which has discouraged the use of these inhibitors for this disease.

The reasons for the poor response to VEGF-targeted therapy in prostate cancer are not well understood but need to be considered in the context of the complexity of VEGF signaling in cancer. In addition to its contribution to endothelial biology and angiogenesis, VEGF signaling in tumor cells has emerged as an important factor in tumor initiation and progression. More specifically, compelling evidence now exists that autocrine VEGF signaling is necessary for the function of cancer stem cells (CSCs) in prostate and other cancers.

Given that CSCs have been implicated in resistance to therapy, tumor recurrence, and metastasis, this role for VEGF signaling is significant and it appears to be independent of its function as a mediator of tumor angiogenesis. The hypothesis can be formulated from this information that the poor response of prostate tumors, especially aggressive tumors, to anti-VEGF (bevacizumab) and anti-VEGR therapy is that these therapies do not target CSCs effectively despite the fact that they are dependent on VEGF signaling. In this study, authors pursued this hypothesis and sought to investigate the mechanisms involved.

They observed that CSCs isolated from prostate tumors are resistant to anti-VEGF (bevacizumab) and anti-VEGFR (sunitinib) therapy. Intriguingly, resistance is mediated by VEGF/neuropilin signaling, which is not inhibited by bevacizumab and sunitinib, and it involves the induction of P-Rex1, a Rac GEF, and consequent Rac1-mediated ERK activation. This induction of P-Rex1 is dependent on Myc.

These data reveal that prostate tumors harbor cells with stem cell properties that are resistant to inhibitors of VEGF/VEGFR signaling. Combining the use of available VEGF/VEGFR-targeted therapies with P-Rex1 or Rac1 inhibition should improve the efficacy of these therapies significantly.