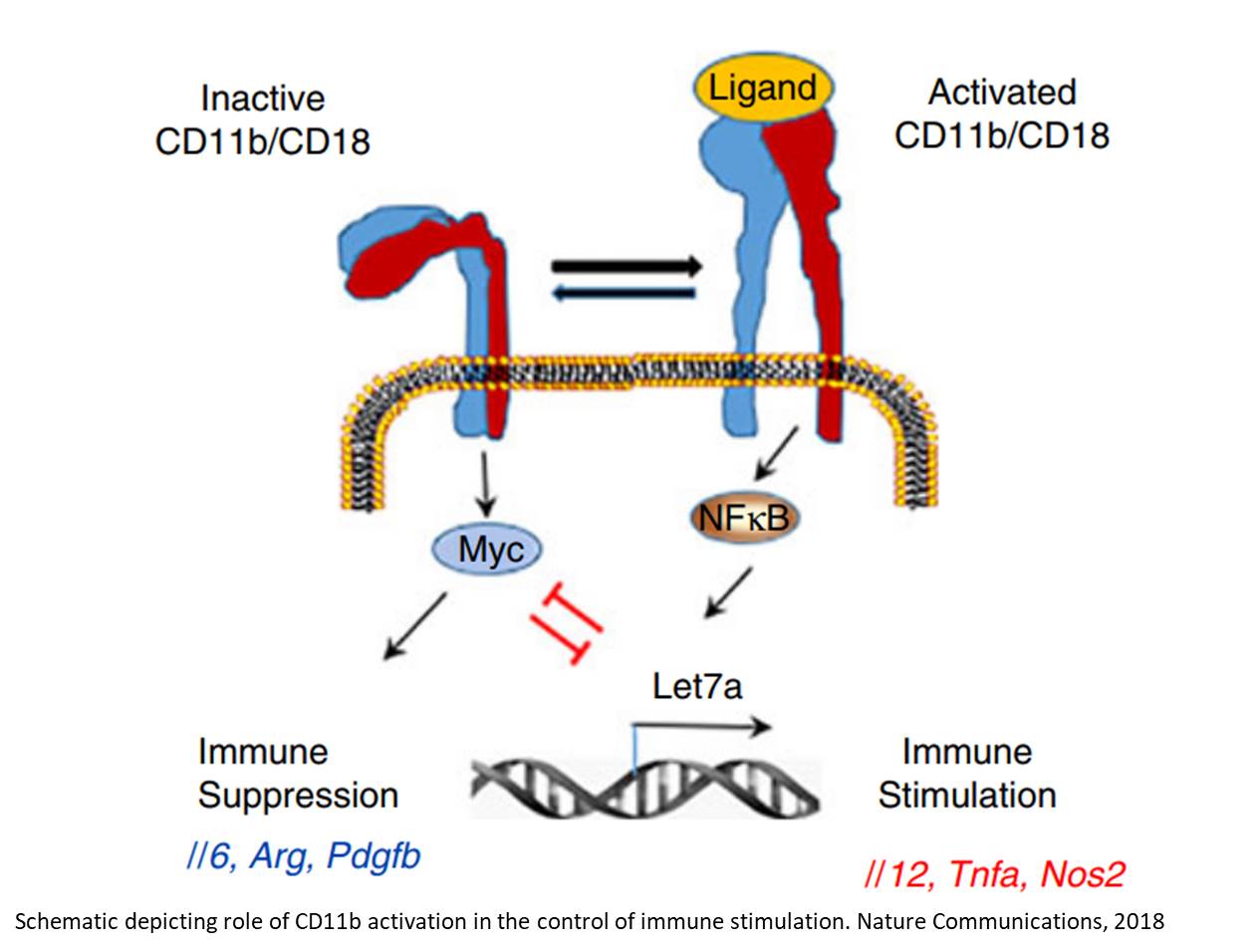 Cancerous tumors trick myeloid cells, an important part of the immune system, into perceiving them as a damaged part of the body; the tumors actually put myeloid cells to work helping them grow and metastasize (spread). A research team has discovered a potential therapy that can disrupt this recruitment and abnormal function of myeloid cells in laboratory mice. The findings of their latest study were published in Nature Communications.

Myeloid cells are a type of white blood cell that kills invaders like bacteria and cancer. "In the cancer context, myeloid cells promote tumor growth and suppress the activity of T cells," says one of the co-senior authors.

In this study, investigators looked at the integrin CD11b, which is present on myeloid cells and normally helps myeloid cell migration and its ability to fight disease. The researchers found that CD11b promotes development of myeloid cells into one sub-type, the M1 macrophage, that functions appropriately to suppress tumor growth. However, the tumors often suppress CD11b activity that results in development of the myeloid cells into a different type of cell, the M2 macrophage. These cells actually ward off T cells, which are vital to fighting disease, and M2s also secrete growth factors and promote the development of new blood vessels that allow cancer to grow and metastasize.

In this study, the team explored how modifying the activity of CD11b affects myeloid cell behavior in the presence of cancer and if that could be used as a novel strategy to treat cancers. Using a small molecule, Leukadherin-1 (LA-1), which in the body activates CD11b, the researchers developed a therapy that can boost the function of CD11b to promote the disease-fighting M1 type of myeloid cells, helping create a microenvironment at the tumor site where T cells can enter and attack the cancer.

The study used two types of genetically altered mice. One set of experiments was done with otherwise normal mice that lacked CD11b. Transplanted tumors grew much larger in those mice as compared to the tumors in wild-type (normal) mice, suggesting that CD11b restrains tumor growth.

Exploring further the reason for this difference, the team found that CD11b plays a critical role in regulating the polarization of myeloid cells into M1 or M2 macrophages. In the absence of CD11b, most of the myeloids cells in tumors were the M2 sub-type, that help the tumor grow and spread.

In a different experiment, the team used LA-1 to boost CD11b activity beyond its normal levels in wild-type (normal) mice, and discovered that this increase caused a significant reduction in tumor growth in treated animals. Then, to be sure that their pharmacological intervention was directly due to the effects of LA-1 on CD11b, they created a mouse with a "point mutation" (a genetic mutation at a single residue in the CD11b protein sequence) and created a situation in which CD11b was active all the time (which is usually isn't) in the genetically modified animals.

"The results were the same," the co-corresponding author says. In both cases, the tumors shrank dramatically, suggesting CD11b activation as an novel target for cancer immunotherapy.

In this study, LA-1 showed a great deal of promise, although, it will be years before a treatment based on this molecule becomes available to patients. The results are very encouraging and will continue to motivate the team to move this novel approach towards developing treatments for patients.