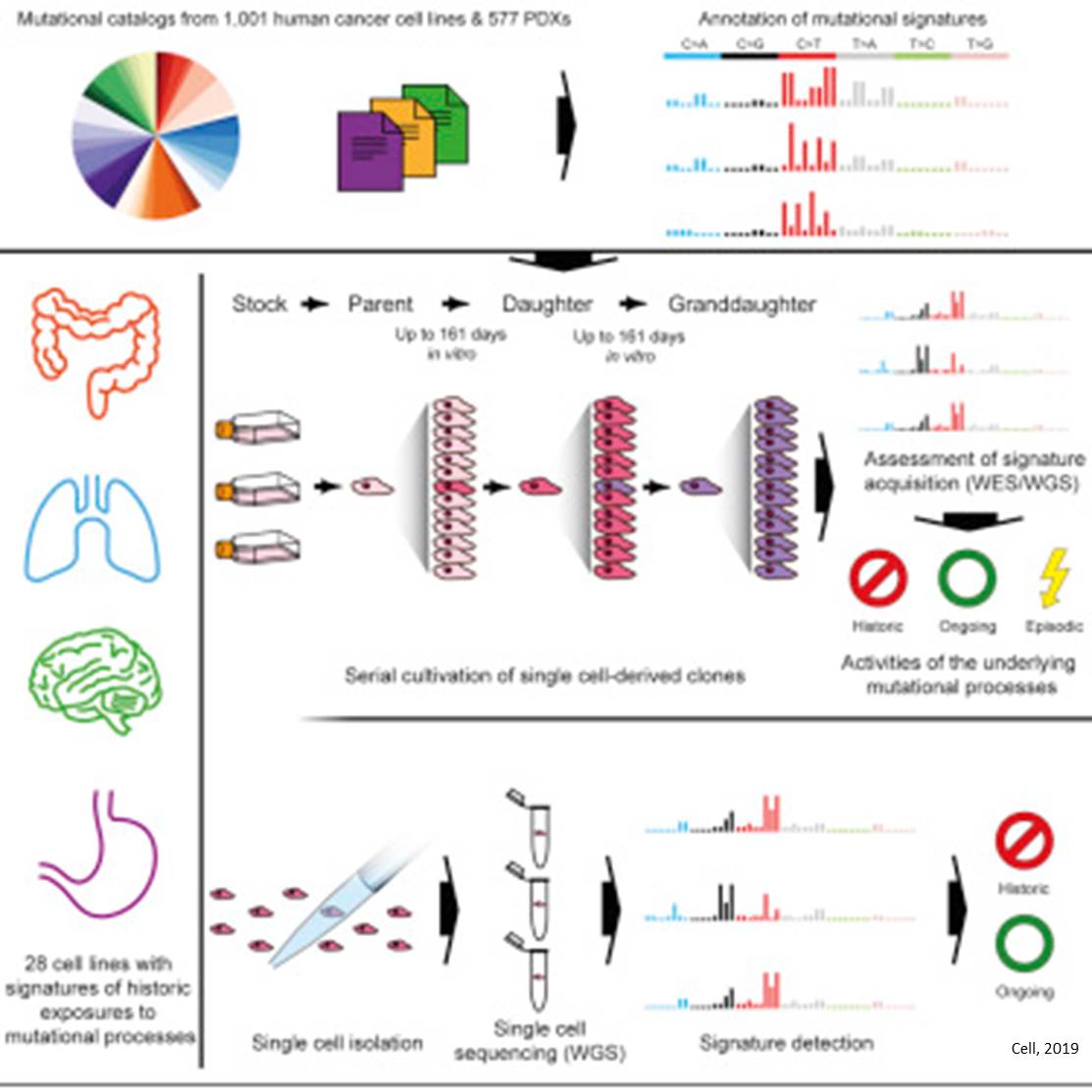 Researchers have created a huge resource for investigating the biological mechanisms that cause cancer. The scientists identified which patterns of DNA damage - mutational fingerprints that represent the origins of cancer - were present in over a thousand human cancer cell lines. They also revealed that a major mutation pattern found in human cancer, previously linked to a virus-fighting immune response, occurred in bursts in cancer cell lines with long periods of silence in between, but the cause of these mutational bursts remains mysterious.

Published in Cell, the resource will enable scientists to study what causes mutations that lead to the development of cancer, directly in human cancer cells. Further understanding into these mutational processes could help researchers find novel avenues for research towards cancer prevention and treatment.

All cancers are caused by DNA mutations, and these mutations form molecular fingerprints in the DNA called mutational signatures. More than 50 different signatures have been found, many of which are caused by external factors, for example ultraviolet light exposure or tobacco smoking. Others are due to factors inside the cell such as the failure of DNA repair mechanisms. However, the causes of many mutational signatures are unknown and they are extremely challenging to study experimentally.

The researchers studied the genome sequences of 1,001 human cancer cell lines and 577 grafts of human cancers*, including the most widely used models in cancer research and therapeutics testing. They used all the known mutational signatures and catalogued which signature is present in each cancer model. This resource then allowed the scientists to choose specific cell lines and study how each mutational pattern changed over time in cancer cells.

They found that mutational signatures from known external factors like smoking or UV light stopped being created in cell lines, whereas most signatures associated with factors inside the cell continued to be generated, and at a steady rate. Surprisingly however, they discovered that two common mutational signatures associated with a DNA editing protein known as APOBEC, actually switched on and off over time in cell lines, a phenomenon they called "episodic mutagenesis".

APOBEC DNA editing enzymes are part of the innate immune system, protecting us from infections by causing mutations in viruses such as HIV, leaving APOBEC mutational signatures in the viral genomes. APOBEC-like signatures are a major mutation pattern in cancers, found in more than 70 per cent of cancer types. A theory for this is that viruses or inflammation could activate the enzymes to mutate the human genome instead of the virus. However, cell lines are not subject to inflammation and no viruses were found, suggesting other factors are involved. Importantly, cell lines found to generate these and other signatures over time can now be used by researchers to investigate the underlying causes of mutations in cancer.

The first author on the paper said: "Mutational signatures in human DNA represent traces of the mutational processes that happened in the past. In the first systematic study of mutational signatures in cell lines over time, we found that the signatures previously associated with APOBEC enzymes were the only mutations that came in bursts of activity. Cell lines that continue to generate APOBEC-associated, and other, signatures over time now provide us and other groups with a set of powerful tools to study root causes of human cancer - the origins of mutations."