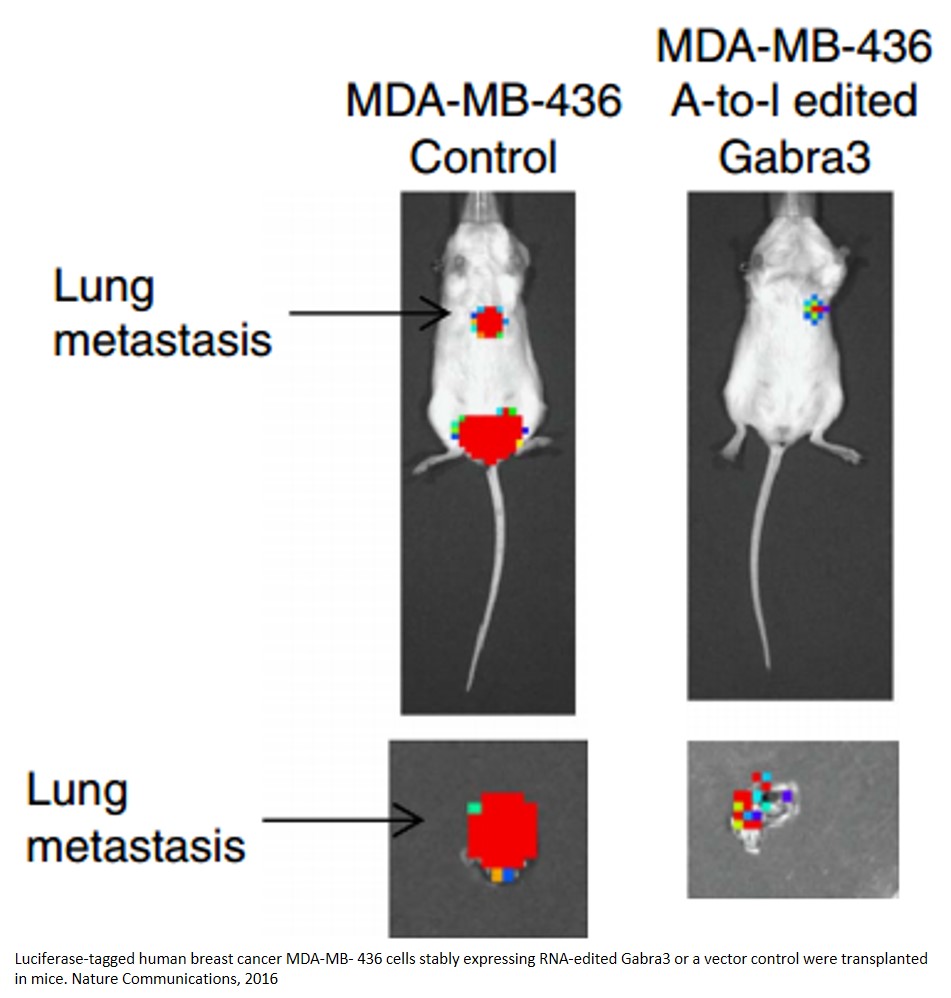 Scientists from The Wistar Institute have shown that one gene that was once thought only to be found in the brain is also expressed in breast cancer and helps promote the growth and spread of the disease. Additionally, they showed how a version of the gene with edited RNA prevents metastasis. The findings were published online by the journal Nature Communications.
The researchers analyzed and identified 41 genes inversely correlated with survival in breast cancer. They focused on one gene in particular: GABAA receptor alpha3 (Gabra3). The gene was particularly intriguing, since prior to this study, researchers believed that Gabra3 was only found in brain tissue.
There were three main reasons the researchers determined it was worth studying. First, it's highly expressed in cancer tissues, but not in healthy breast tissues. Second, it's a cell surface molecule and therefore something that could be potentially targeted by a drug. Finally, drugs that target Gabra3 are already available for treating other diseases like insomnia.
The researchers showed that cells expressing Gabra3 were better at migrating and invading than their control counterparts, and Gabra3 showed metastasis-promoting activity in vivo, and animal models injected with the activated gene all developed metastatic lesions in their lungs. It does so by activating the AKT pathway, a cellular pathway essential to cell growth and survival in many types of cancer including breast cancer.
In some instances, though, certain types of Gabra3 are actually able to suppress breast cancer metastasis. This is closely linked to the RNA of the gene. RNA is a type of molecule similar to the DNA that encodes our genes, and recent discoveries have shown that RNA has a complex role in regulating how genes are turned on or off. In a phenomenon known as "RNA editing," small changes can be made to RNA nucleotide sequences even after they've been generated.
Researchers found that Gabra3 that had undergone RNA editing was found only in non-invasive breast cancers. When the RNA is edited, it suppressed the activation of the AKT pathway required for metastasis, meaning that breast cancer with this specific type of Gabra3 was unable to spread to other organs. This is particularly encouraging since signaling proteins called interferons can increase RNA editing activity and could therefore prevent Gabra3 from activating the AKT pathway.
"We believe this is the first time that anyone has demonstrated the importance of RNA editing in breast cancer," author said. "A combination strategy that that involves targeting Gabra3 while also upregulating the expression of RNA editing molecules could be an effective strategy for managing metastatic breast cancer."