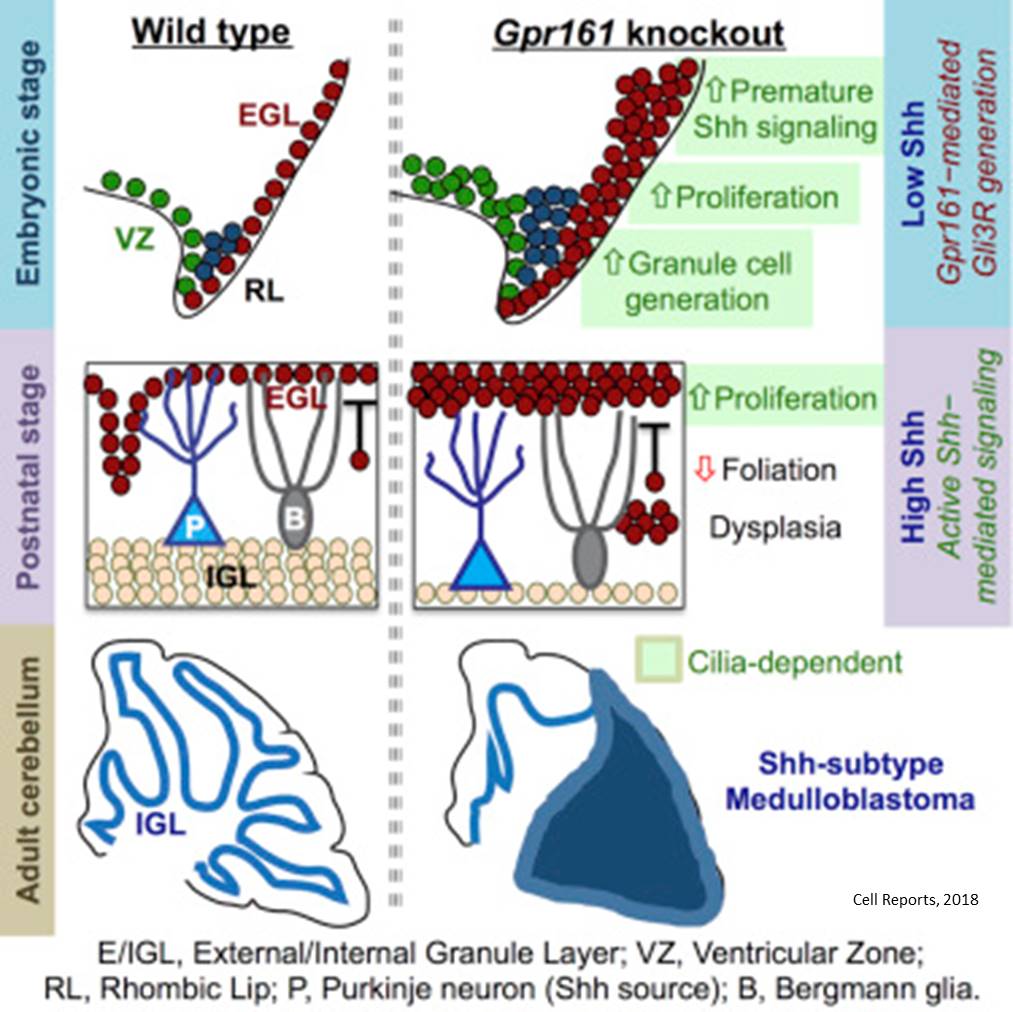 A delicate balance during brain development could have profound implications for understanding and treating medulloblastoma, the most common malignant brain tumor affecting children.

Medulloblastoma of the Sonic Hedgehog subtype can occur at any age, but it is most often seen in children. When not fatal, the disease is marked by severe neurocognitive disabilities. How Sonic Hedgehog subtype tumors develop has been poorly understood, said, senior author of a recent study featured on the cover of Cell Reports.

"We modeled the Sonic Hedgehog medulloblastoma in mice by deleting a gene for a G protein-coupled receptor called Gpr161 that was not known to be involved in this tumor," said first author. "Interestingly, we found that in the absence of Gpr161, which actively represses the downstream pathway, the granule cells proliferate even before Sonic Hedgehog is secreted."

The senior author added, "Repression of the downstream pathway in the absence of Sonic Hedgehog is as important as activation in its presence. Bottom line: The granule cell behaves like a car on a downhill slope with the hand brake on. Loss of the hand brake is as damaging as the accelerator being pressed too hard."

This means that Gpr161 acts as a tumor suppressor for Sonic Hedgehog medulloblastomas by preventing too many granule cells from being made.

Medulloblastomas account for 15 to 20 percent of all pediatric brain tumors, according to the National Institutes of Health. While they are most commonly diagnosed in children between ages 3 and 8, they can be seen in all age groups. About 350 cases are diagnosed each year in the U.S.

In 2017, a survey of the National Cancer Database tracked 4,032 patients with medulloblastomas. Of these, 1,300 were age 18 or younger and received chemotherapy and radiation treatment. The median age was 8.4 years, and the group's five-year survival rate was 79 percent.

Only one drug, vismodegib, currently targets the upstream Sonic Hedgehog pathway for treating these pediatric tumors, senior author said. Now that this work has identified Gpr161 as a tumor suppressor, focusing on Gpr161 might be a new strategy to inhibit progression of tumors that develop resistance to drugs targeting the upstream Sonic Hedgehog pathway, senior author said.