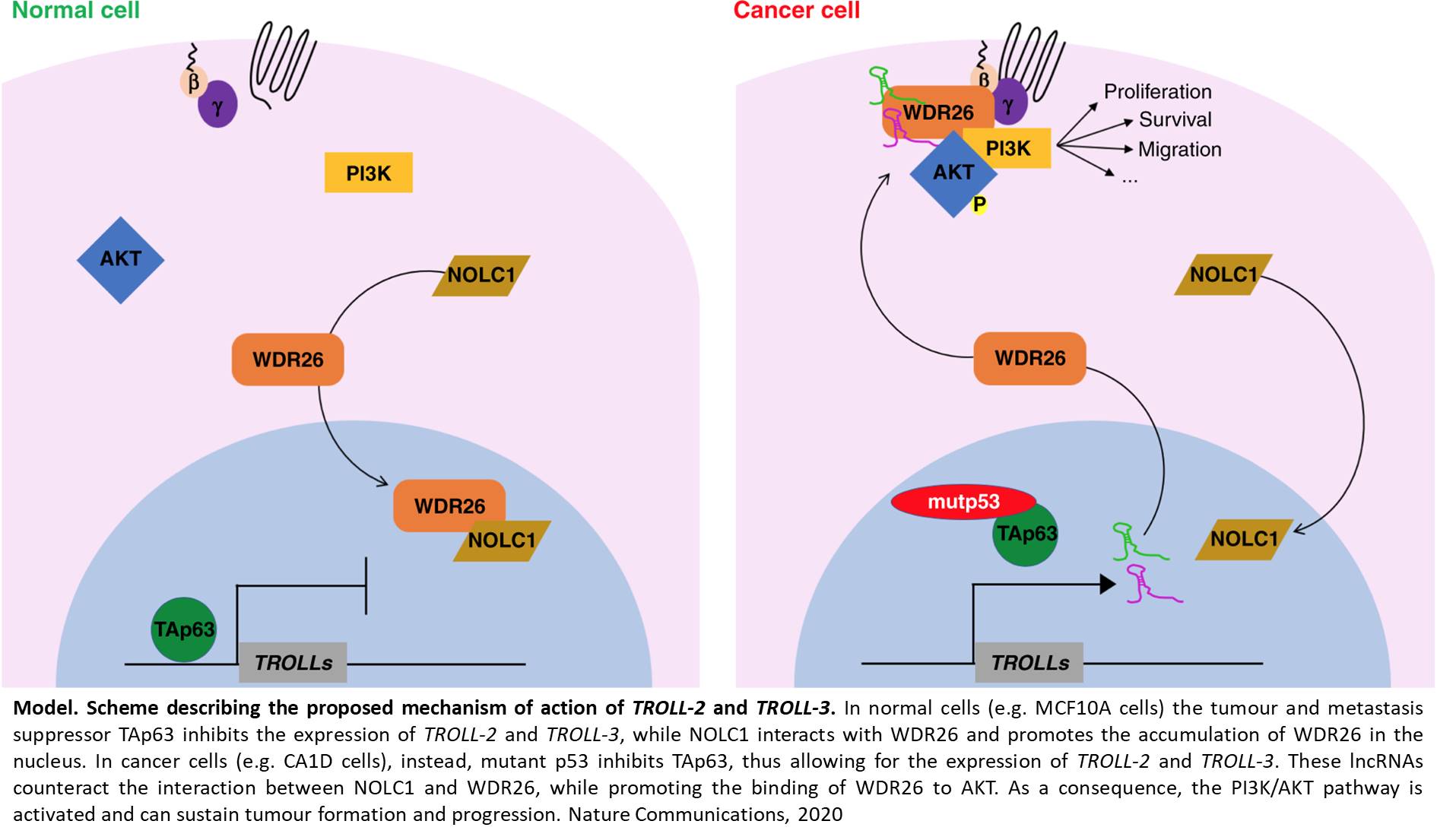 The development of cancer is a highly complicated process, involving multiple genes and signaling pathways that become upregulated or downregulated throughout different stages of tumor growth and spread. Two of the most commonly altered genes in cancer are p53 and AKT. In a new article published in the journal Nature Communications, researchers describe how the protein TAp63 controls levels of RNA molecules, which subsequently connects the activities of p53 and AKT to promote disease progression.

P53 is one of the most highly mutated genes in cancer. Mutations in p53 can impact a downstream protein named TAp63 and block its anti-cancer activity, resulting in tumor development. Likewise, AKT is an important mediator of cancer progression that controls proliferation, migration, invasion and survival.

The researchers previously showed that TAp63 functions as a tumor suppressor gene and that loss of its activity can lead to tumor development and spread. In follow-up studies, they wanted to determine the mechanism of how loss of TAp63 activity can lead to cancer in an effort to hijack these pathways to overcome p53 mutation in a therapeutic setting. Their investigations led them to make a connection between TAp63 and a type of RNA molecule called long noncoding RNA (lncRNA).

RNA is considered an intermediary molecule; DNA codes for RNA, which is turn codes for protein. However, scientists are now aware that some RNA molecules do not code for proteins, rather they are noncoding RNA molecules with a variety of functions that control normal physiological processes, and altered expression or activity of these lncRNAs can lead to the development and progression of disease. The lab performed a variety of laboratory and mouse studies to show that TAp63 regulates the expression of lncRNA.

The authors demonstrated that the lncRNAs stimulated cell migration and invasion, and high expression of two of the lncRNAs named TROLL-2 and TROLL-3 was associated with breast cancer progression. Importantly, downregulation of TROLL-2 and TROLL-3 inhibited the formation of several tumor types in mice including breast, melanoma and lung cancer. Additionally, the researchers found that TROLL-2 and TROLL-3 are highly expressed in a variety of metastatic human cancers, suggesting that these lncRNAs may be potential prognostic markers for tumor progression and targets for anti-cancer therapies.

The researchers also demonstrated that the tumor-promoting properties of the lncRNAs are dependent on the proteins WDR26 and NOLC1, which allow for shuttling in and out of the cell nucleus and regulation of cellular processes critical for cell survival. In cancer cells that lack TAp63 activity, TROLL-2 and TROLL-3 bind to WDR26 in the nucleus of the cell, preventing its interaction with NOLC1 and causing WDR26 to be shuttled out of the nucleus into the cytoplasm. In the cytoplasm, WDR26 stimulates the AKT signaling pathway, leading to increased cell migration and invasion and the promotion of tumor development.

The discovery of this complicated interplay between multiple proteins and lncRNAs highlights several key points throughout the signaling pathway that may be viable prognostic markers for tumor progression and therapeutic targets for cancer, including TROLL-2, TROLL-3, WDR26 or the interaction between these molecules and AKT.

"Our findings identify a crucial mechanism for the activation of the AKT pathway through TAp63-regulated lncRNAs (TROLLs) and pave the way for more effective diagnostic tools for cancer progression and therapies against metastatic cancers with alterations in TP53 and hyperactivation of the PI3K/AKT pathway," the senior author said.