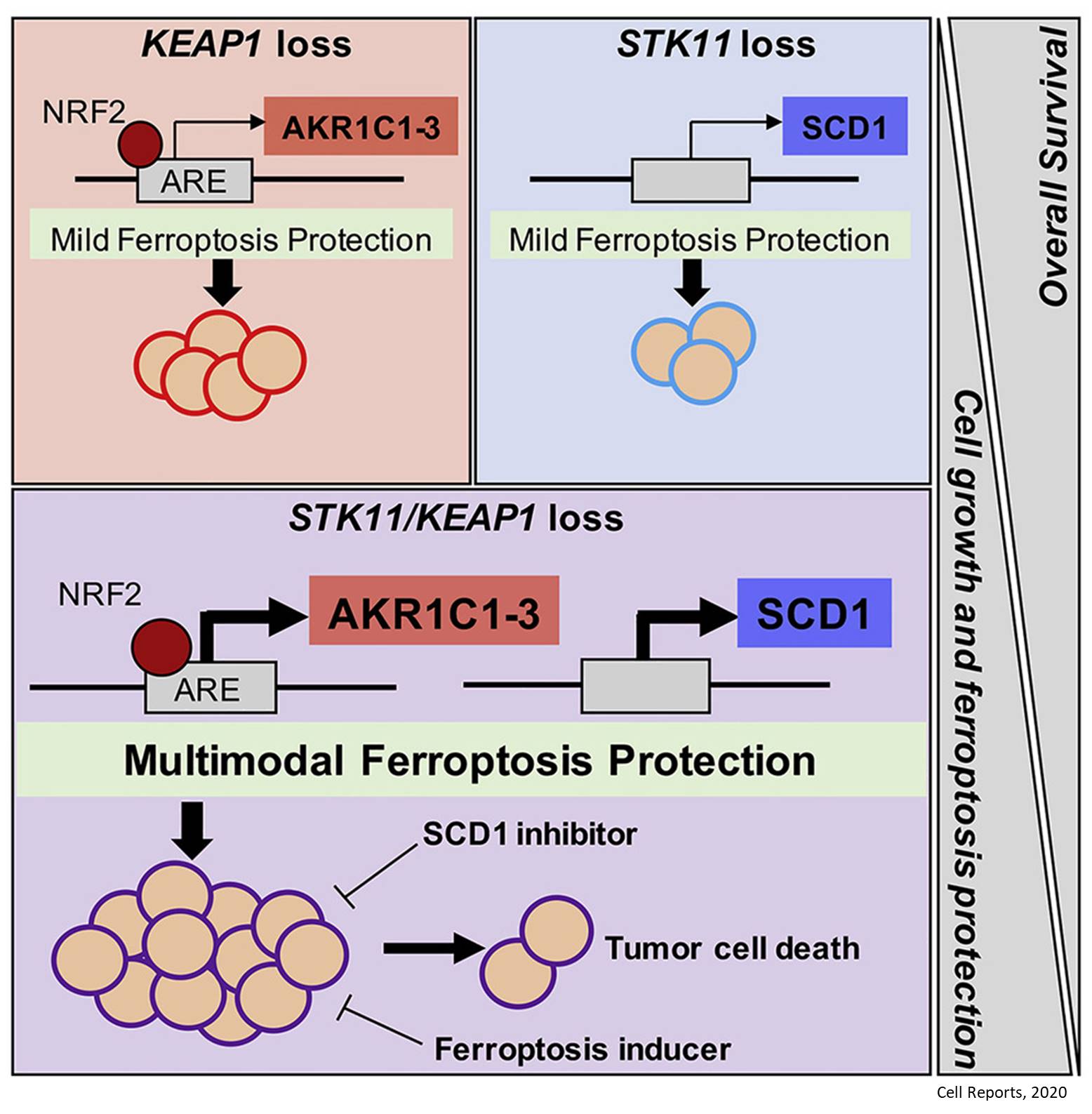 Targeted therapies are currently available for about one-third of people with lung adenocarcinoma, the most common kind of lung cancer. These drugs inhibit cancer cells by thwarting the molecular changes that drive them to grow while largely sparing healthy tissues. But for the other two-thirds of people with this type of cancer, there are fewer treatment options.

A research team is reporting new findings about a particularly aggressive subset of lung adenocarcinomas that are driven by two mutations that frequently occur together, in genes called KEAP1 and STK11. The molecular changes characteristic of these tumors were surprising to the investigators who discovered them: they block a type of cell death called ferroptosis. Cancers with these changes require this blockade to stay alive and grow. The study was published in Cell Reports.

Ferroptosis is a type of programmed cell death that is dependent on iron. Ferroptosis was discovered less than a decade ago, but it has already emerged as an important target for cancer therapies as well as drug treatments for other diseases. When ferroptosis fails to occur when it should, cells can grow uncontrollably.

"We really didn't know what particular vulnerabilities we would find in these cancer cells," says the paper's senior author. "But all of the work we report in this study pointed toward ferroptosis as a key player."

The genetic change that allows the cancer cells to block ferroptosis is called a co-mutation: alterations in two genes called STK11 and KEAP1 work together to create an environment in which tumor cells are able to grow even when they are receiving signals that would otherwise induce cell death. The combination of mutations in these two genes is found in more than 10% of lung adenocarcinomas, so a drug that could successfully target this alteration would have a meaningful impact.

The authors discovered that the STK11/KEAP1 co-mutation is often found in lung adenocarcinomas that are very aggressive and hard to treat. They made the discovery when doing an analysis of lung cancer using data from MSK-IMPACTTM, a test that looks for hundreds of mutations in tumors at the same time. The connection to ferroptosis was unexpected. "Our findings suggest that targeting certain proteins that play a role in the regulation of ferroptosis could lead to new treatments for this cancer," the senior author says.

In the current study, first author used the gene editing tool CRISPR -- which allows researchers to make very specific changes to the genetic code -- to create three types of cells: some of these cells had the gene STK11 knocked out, some had KEAP1 knocked out, and some had both genes knocked out. She then isolated each of the three cell types and studied them in the lab, including in mouse models. By analyzing the cells' behaviors, the author was able to figure out which other genes were activated when STK11 and KEAP1 were lost.

"Lung cancers tend to be very heterogeneous, so if you don't do these kinds of controlled experiments it's hard to isolate changes attributable to a particular gene or set of genes," the senior author says. "By creating these knockouts, it allows us to really focus on cells with these mutations and to link any behaviors we observe to the presence or absence of these factors."

The team's observations helped them make the connection to ferroptosis. They found that cells with both the STK11 and KEAP1 mutations also had high levels of proteins already known to make cells resistant to ferroptosis. The authors pinpointed one of these proteins, called SCD1, as a particularly good target for these tumors.

"Although the current SCD1 inhibitors that we have are not likely to make good drugs," the author explains, "there are many labs at MSK that are actively investigating strategies for targeting ferroptosis in cancer cells."