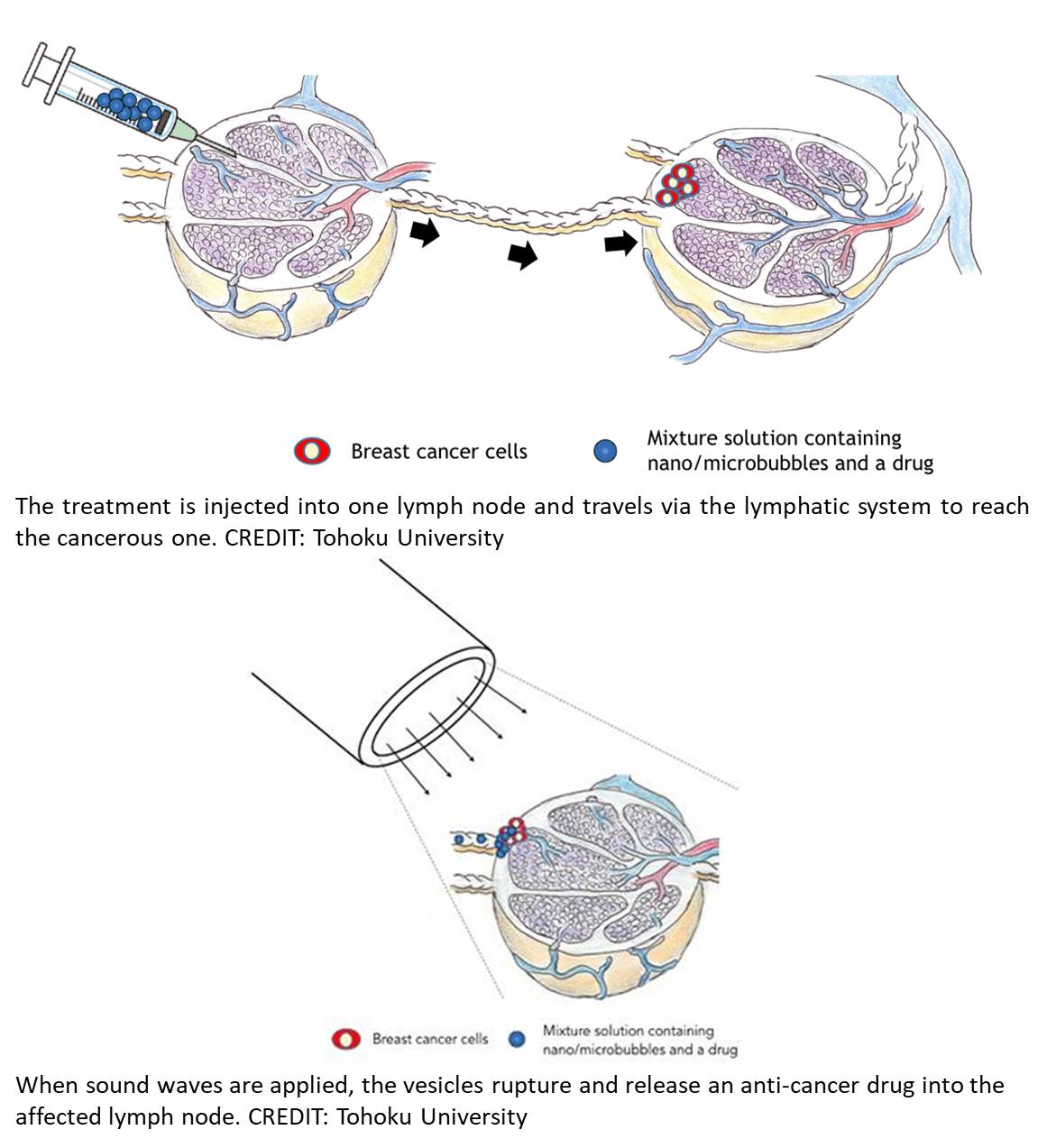 Drugs can be safely delivered to cancerous lymph nodes via the lymphatic system and then released inside the nodes using sound waves. Researchers tested the treatment on mice with metastatic breast cancer and published their findings in the journal Scientific Reports.

"We believe that our technique has the potential to be developed into a new treatment for lymph nodes invaded by metastatic tumor cells," says the senior author of the study.

The treatment involves injecting vesicles carrying anticancer drugs into a pelvic lymph node. The vesicles travel through the lymphatic system to reach lymph nodes in the armpit affected by breast cancer metastases. When high power ultrasound is applied to the armpit, the vesicles rupture, leading to targeted drug release.

Breast cancer is the most common cancer in women and causes the greatest number of cancer-related deaths amongst them. In its advanced stages, cancer cells can break away from the original tumor and travel through the lymphatic system to establish metastases in lymph nodes that can then travel to other parts of the body.

Disease prognosis could be improved if there was a way to safely and effectively treat lymph node metastases. Currently available treatments are highly invasive and can have severe side effects.

The authors had previously tested their treatment on mice with a type of breast tumor that produces lymph node metastases with low invasive growth and well-defined borders. For this study, they tried the treatment on the more invasive metastases generated by breast cancer.

The team first used an ultrasound imaging technique to follow the movement of drug-free 'acoustic liposomes', vesicles containing gas bubbles, through the lymphatic system in mice. They were able to confirm that liposomes injected into a pelvic lymph node travelled to an armpit lymph node, where they settled.

They then injected breast cancer cells into the pelvic lymph nodes of another group of mice. The cancer cells quickly reached and invaded the armpit lymph node.

Acoustic liposomes carrying the anticancer drug doxorubicin were then injected into the pelvic lymph node. High-intensity sound waves were applied to the armpit area on the same and third days following the injection to rupture the liposomes and release the drug.

The team demonstrated that the treatment was effective in killing the cancerous tissue using a bioluminescence technique that monitors cancer growth, and by studying excised lymph nodes under a microscope.

Further investigations will be needed to determine the optimal injection rate and volume of the treatment to prevent lymphatic complications.