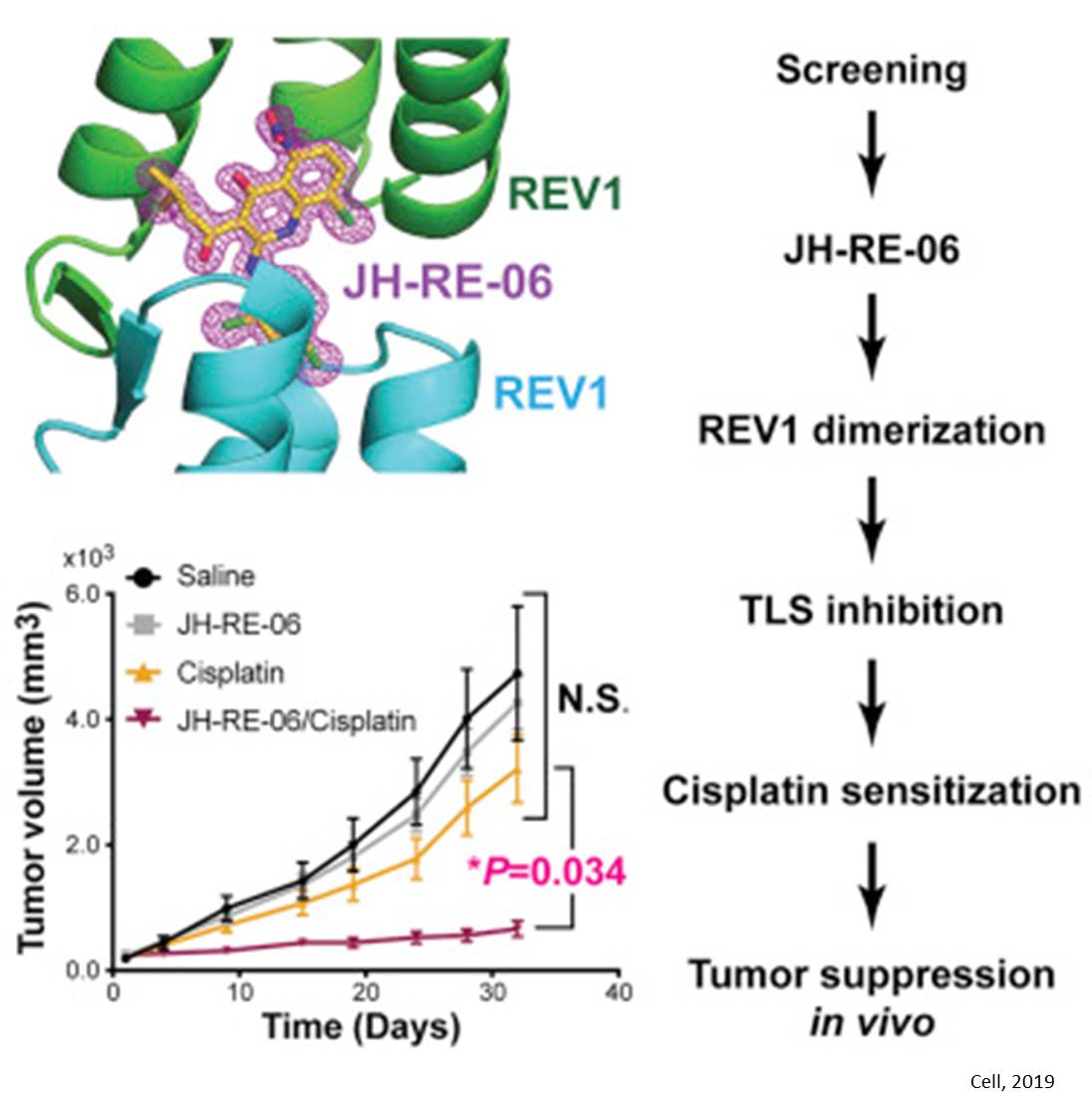 Many chemotherapy drugs kill cancer cells by severely damaging their DNA. However, some tumors can withstand this damage by relying on a DNA repair pathway that not only allows them to survive, but also introduces mutations that helps cells become resistant to future treatment.

Researchers have now discovered a potential drug compound that can block this repair pathway. "This compound increased cell killing with cisplatin and prevented mutagenesis, which is was what we expected from blocking this pathway," says one of the senior authors of the study published in the journal Cell.

Cisplatin, which used as the first treatment option for at least a dozen types of cancer, often successfully destroys tumors, but they frequently grow back following treatment. Drugs that target the mutagenic DNA repair pathway that contributes to this recurrence could help to improve the long-term effectiveness of not only cisplatin but also other chemotherapy drugs that damage DNA, the researchers say.

"We're trying to make the therapy work better, and we also want to make the tumor recurrently sensitive to  therapy upon repeated doses," says another senior author of the study.

Healthy cells have several repair pathways that can accurately remove DNA damage from cells. As cells become cancerous, they sometimes lose one of these accurate DNA repair systems, so they rely heavily on an alternative coping strategy known as translesion synthesis (TLS).

This process relies on specialized TLS DNA polymerases. Unlike the normal DNA polymerases used to replicate DNA, these TLS DNA polymerases can essentially copy over damaged DNA, but the copying they perform is not very accurate. This enables cancer cells to survive treatment with a DNA-damaging agent such as cisplatin, and it leads them to acquire many additional mutations that can make them resistant to further treatment.

"Because these TLS DNA polymerases are really error-prone, they are accountable for nearly all of the mutation that is induced by drugs like cisplatin," the co-senior author says. "It's very well-established that with these frontline chemotherapies that we use, if they don't cure you, they make you worse."

In a pair of studies published in 2010, the researchers showed that if they used RNA interference to reduce the expression of Rev1, cisplatin treatment became much more effective against lymphoma and lung cancer in mice. While some of the tumors grew back, the new tumors were not resistant to cisplatin and could be killed again with a new round of treatment.

After showing that interfering with translesion synthesis could be beneficial, the researchers set out to find a small-molecule drug that could have the same effectand performed a screen of about 10,000 potential drug compounds and identified one that binds tightly to Rev1, preventing it from interacting with Rev3/Rev7 complex.

The interaction of Rev1 with the Rev7 component of the second TLS DNA polymerase had been considered "undruggable" because it occurs in a very shallow pocket of Rev1, with few features that would be easy for a drug to latch onto. However, to the researchers' surprise, they found a molecule that actually binds to two molecules of Rev1, one at each end, and brings them together to form a complex called a dimer. This dimerized form of Rev1 cannot bind to the Rev3/Rev7 TLS DNA polymerase, so translesion synthesis cannot occur.

The authors tested the compound along with cisplatin in several types of human cancer cells and found that the combination killed many more cells than cisplatin on its own. And, the cells that survived had a greatly reduced ability to generate new mutations.

"Because this novel translesion synthesis inhibitor targets the mutagenic ability of cancer cells to resist therapy, it can potentially address the issue of cancer relapse, where cancers continue to evolve from new mutations and together pose a major challenge in cancer treatment," one of the lead author says.

The authors then tested the drug combination in mice with human melanoma tumors and found that the tumors shrank much more than tumors treated with cisplatin alone. They now hope that their findings will lead to further research on compounds that could act as translesion synthesis inhibitors to enhance the killing effects of existing chemotherapy drugs.