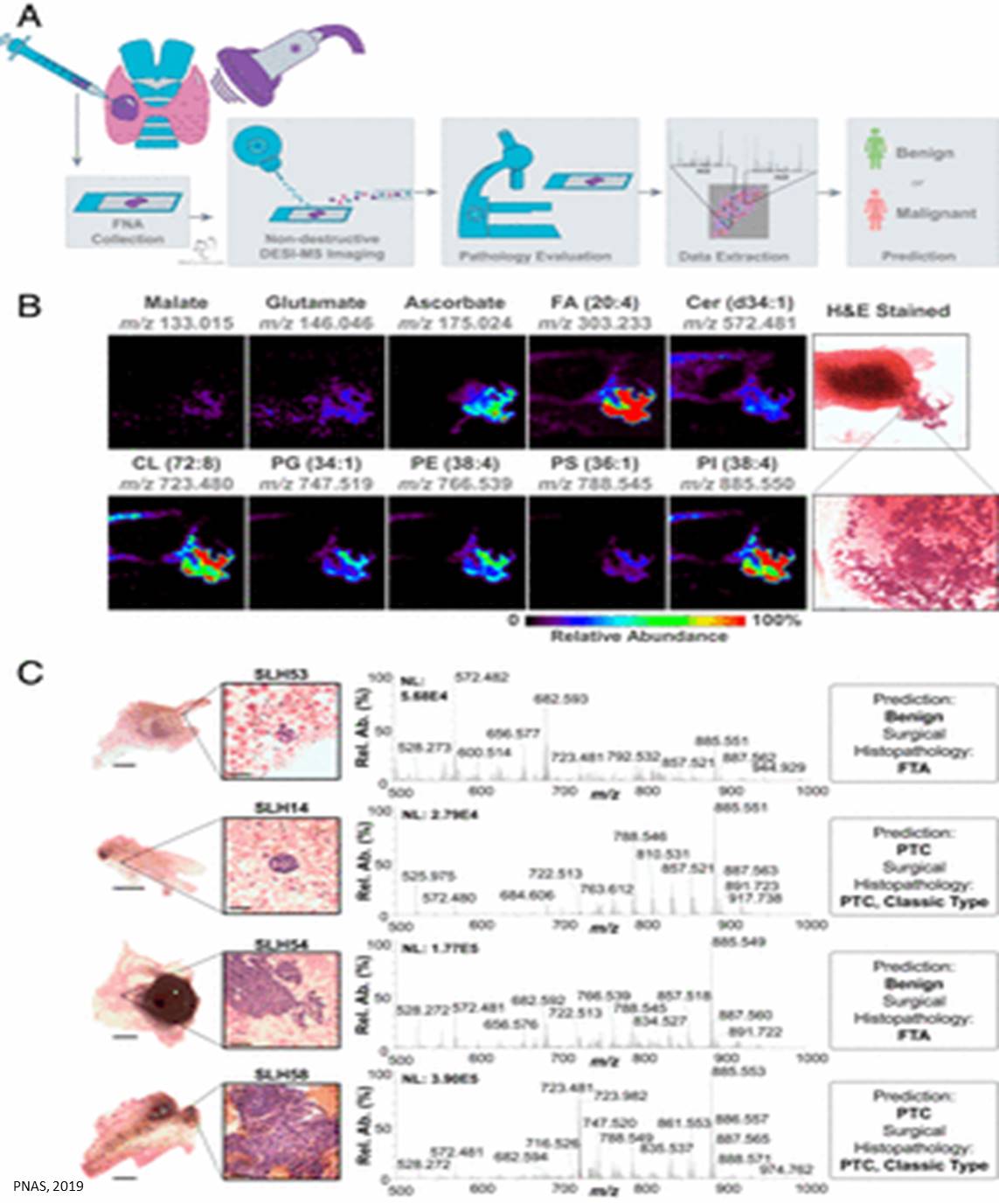 Researchers have developed a new preoperative test for thyroid cancer that is faster and about two-thirds more accurate than the diagnostic tests doctors use today. Although more validation will be necessary before it can be used clinically, the new metabolic thyroid test shows promise for preventing thousands of unnecessary thyroid removals each year.

The results appear this week in the journal Proceedings of the National Academy of Sciences.

"If we could prevent people from having surgery they don't need and enable them to have a more precise diagnosis, we can improve treatment for patients and lower costs for the health care system," said the co-principal investigator.

Each year in the U.S., about 52,000 new cases of thyroid cancer are diagnosed. Unfortunately, the test used for diagnosis, called fine needle aspiration (FNA), is inconclusive about 1 out of every 5 times. When a pathologist is unable to confirm the presence of cancer, the patient may receive a follow-up genetic test that itself can produce false positive results.

Given the uncertainties, doctors often recommend removing part or all of the thyroid - the gland in the neck producing hormones that control the body's metabolic rate, as well as heart and digestive function, muscle control, brain development, mood and bone maintenance. Thousands of patients each year have the surgery only to later learn it was unnecessary.

Using a technology called mass spectrometry imaging, the new metabolic thyroid test identifies metabolites produced by cancerous cells that act as a kind of diagnostic fingerprint. The researchers worked on identifying these diagnostic metabolic fingerprints for over two years using 178 patient tissues before starting a pilot clinical study. During the clinical study, 68 new patients were tested, nearly a third of whom had received inconclusive FNA results. The new metabolic thyroid test returned a false positive only about 1 time in 10 and could have prevented 17 patients in the study from undergoing unnecessary surgeries.

The improved accuracy would prevent unnecessary surgeries, many of which lead patients to need hormone replacement therapy for the rest of their lives or to have to cope with other consequences of having all or part of their thyroid removed. For example, Helms, a graduate student in chemistry at UT Austin, learned a few years ago as an undergraduate student at the age of 19 that lumps on her thyroid were indicative of possible cancer. When her FNA biopsy came back as inconclusive, a doctor recommended removing the right half of her thyroid. For Helms, a difficult surgery and recovery followed, though she soon received word that pathologists detected no cancer in the removed tissue. Helms says the new test could prevent others from going through what she did.

"A lot fewer people would have to get surgery unnecessarily, which saves them time, money and recovery," the grad student said. "It would also take away the uncertainty."

A co-principal investigator and head of endocrine surgery at Baylor College of Medicine in Houston, collected FNA biopsies from the patients involved in the study and implemented the technology in a pilot trial to demonstrate the accuracy of the new test.

"With this next generation test, we can provide thyroid cancer diagnoses faster and with more precision than current techniques - this will be the new state-of-the-art," said co-principal investigator. "We are able to do this analysis directly on the FNA sample and much more rapidly than the current process, which could take between three and 30 days."

The team is now preparing to start a two-year validation study on FNAs from about a thousand new patients collected in the U.S., Brazil and Australia. If the results hold up, they hope the technology will be translated to the clinic as a routine diagnostic tool.