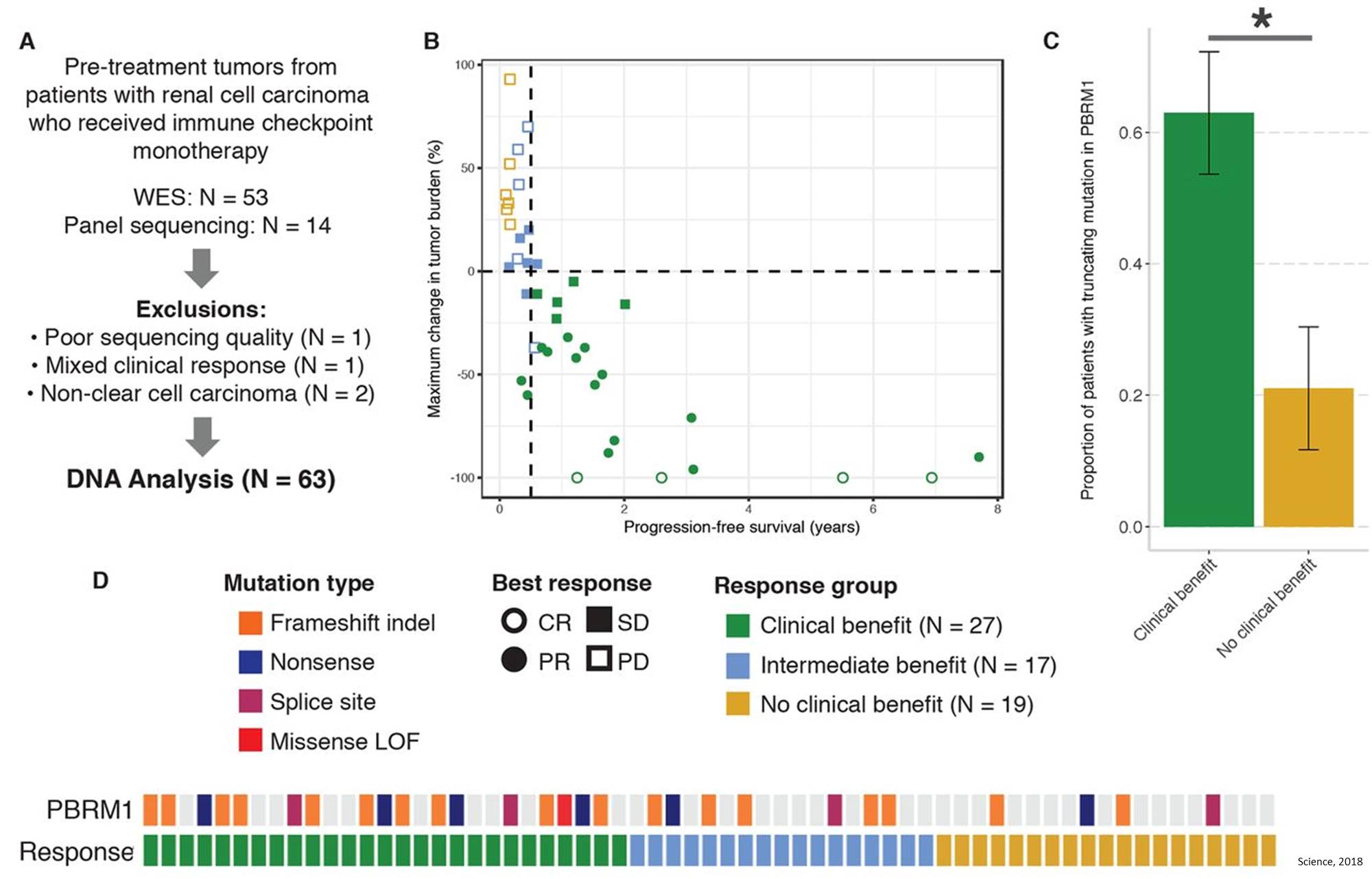 An urgent question for cancer scientists is why immunotherapy achieves dramatic results in some cases but doesn't help most patients. Now, two research groups have independently discovered a genetic mechanism in cancer cells that influences whether they resist or respond to immunotherapy drugs known as checkpoint inhibitors. The discoveries are detailed in two articles published by the journal Science.

The two groups converged on a discovery that resistance to immune checkpoint blockade is critically controlled by changes in a group of proteins that regulate how DNA is packaged in cells. The collection of proteins, called a chromatin remodeling complex, is known as SWI/SNF; its components are encoded by different genes, among them ARID2, PBRM1, and BRD7. SWI/SNF's job is to open up stretches of tightly wound DNA so that its blueprints can be read by the cell to activate certain genes to make proteins.

Researchers sought an explanation for why some patients with a form of metastatic kidney cancer called clear cell renal cell cancer (ccRCC) gain clinical benefit - sometimes durable - from treatment with immune checkpoint inhibitors that block the PD-1 checkpoint, while other patients don't.

The scientists' curiosity was piqued by the fact that ccRCC differs from other types of cancer that respond well to immunotherapy, such as melanoma, non-small cell lung cancer, and a specific type of colorectal cancer. Cells of the latter cancer types contain many DNA mutations, which are thought to make distinctive "neoantigens" that help the patient's immune system recognize and attack tumors, and make the cancer cells' "microenvironment" hospitable to tumor-fighting T cells. By contrast, ccRCC kidney cancer cells contain few mutations, yet some patients even with advanced, metastatic disease respond well to immunotherapy.

To search for other characteristics of ccRCC tumors that influences immunotherapy response or resistance, the researchers used whole-exome DNA sequencing to analyze tumor samples from 35 patients treated in a clinical trial with the checkpoint blocker nivolumab (Opdivo). They also analyzed samples from another group of 63 patients with metastatic ccRCC treated with similar drugs.

When the data was sorted and refined, the scientists discovered that patients who benefited from the immunotherapy treatment with longer survival and progression-free survival were those whose tumors lacked a functioning PRBM1 gene. (About 41 percent of patients with ccRCC kidney cancer have a non-functioning PBRM1 gene.) That gene encodes a protein called BAF 180, which is a subunit of the PBAF subtype of the SWI/SNF chromatin remodeling complex.

Loss of the PBRM1 gene function caused the cancer cells to have increased expression of other genes, including gene pathway known as IL6/JAK-STAT3, which are involved in immune system stimulation.

While the finding does not directly lead to a test for immunotherapy response yet, the author said, "We intend to look at these specific genomic alterations in larger, randomized controlled trials, and we hope that one day these findings will be the impetus for prospective clinical trials based on these alterations."

In the second report, the scientists came at the issue from a different angle. They used the gene-editing CRISPR/Cas9 technique to sift the genomes of melanoma cells for changes that made tumors resistant to being killed by immune T cells, which are the main actors in the immune system response against infections and cancer cells. The search turned up about 100 genes which appeared to govern melanoma cells' resistance to being killed by T cells. Inactivating those genes rendered the cancer cells sensitive to T-cell killing. Narrowing down their search, the team identified the PBAF subtype of the SWI/SNF chromatin remodeling complex - the same group of proteins implicated by the other team in kidney cancer cells - as being involved in resistance to immune T cells.

When the PBRM1 gene was knocked out in experiments, the melanoma cells became more sensitive to interferon-gamma produced by T cells, and in response produced signaling molecules that recruited more tumor-fighting T cells into the tumor. The two other genes in the PBAF complex - ARID2 and BRD7 - are also found mutated in some cancers, according to the researchers, and those cancers, like the melanoma lacking ARID2 function, may also respond better to checkpoint blockade. The protein products of these genes, the authors note, "represent targets for immunotherapy, because inactivating mutations sensitize tumor cells to T-cell mediated attack."

Finding ways to alter those target molecules, they add, "will be important to extend the benefit of immunotherapy to larger patient populations, including cancers that thus far are refractory to immunotherapy."