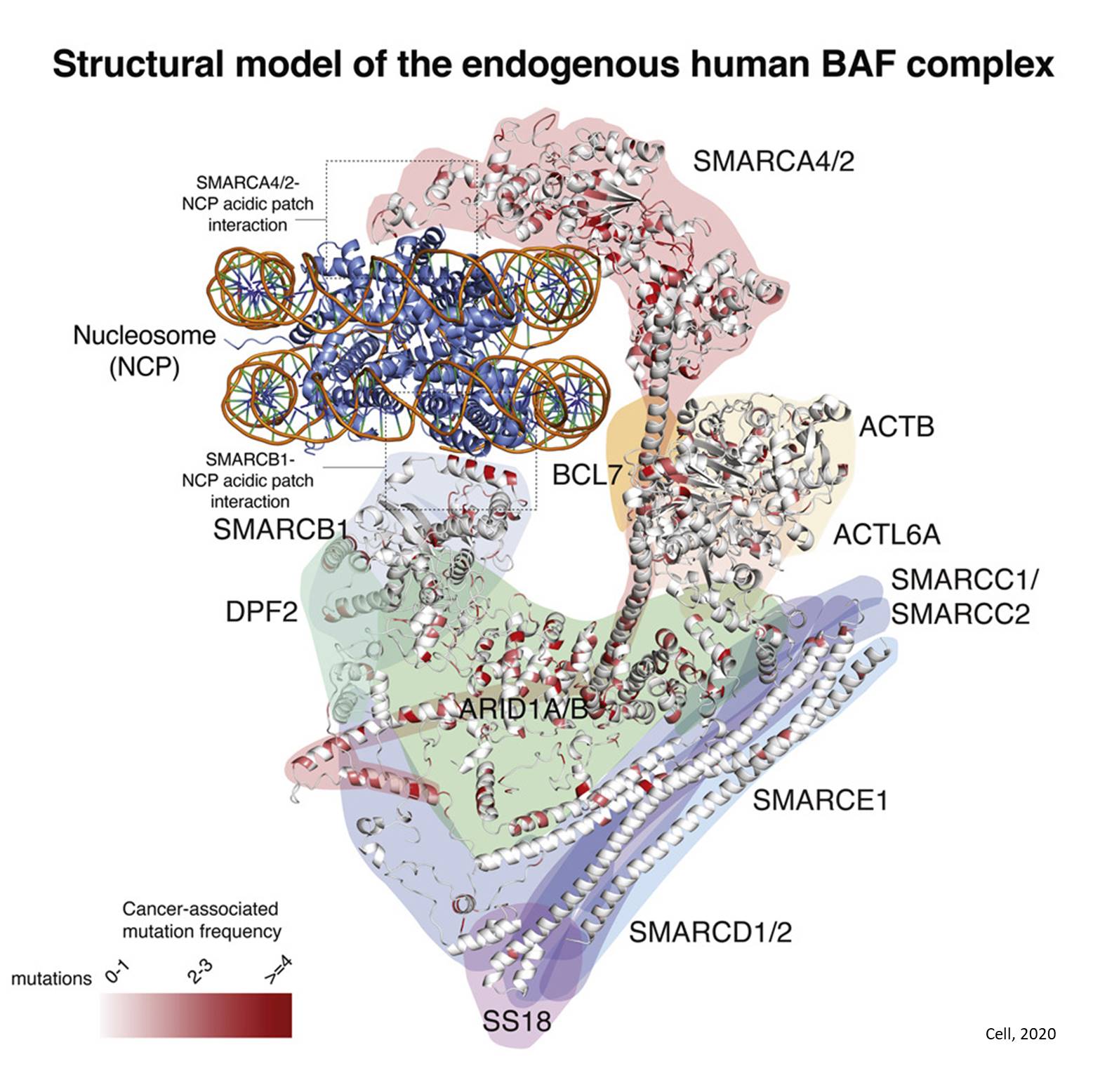 Scientists have created an unprecedented 3-dimensional structural model of a key molecular "machine" known as the BAF complex, which modifies DNA architecture and is frequently mutated in cancer and some other diseases. The researchers have reported the first 3-D structural "picture" of BAF complexes purified directly from human cells in their native states - rather than artificially synthesized in the laboratory -providing an opportunity to spatially map thousands of cancer-associated mutations to specific locations within the complex.

"A 3-D structural model, or 'picture,' of how this complex actually looks inside the nucleus of our cells has remained elusive - until now," says the author. The newly obtained model represents "the most complete picture of the human BAF complex achieved to date," said the investigators, reporting in the journal Cell.

These new findings "provide a critical foundation for understanding human disease-associated mutations in components of the BAF complex, which are present in over 20% of human cancers and in several intellectual disability and neurodevelopomental disorders," the authors said. These insights could help scientists understand how mutations in proteins making up the complex lead to disruption of the normal regulation of DNA and hence the expression of genes in cells, potentially causing cancerous growth of cells to form tumors. Mutations in the BAF complex, for example, are the sole cause of rare childhood cancers such as synovial sarcoma and malignant rhabdoid, and contribute to common cancers such as ovarian and lung cancers.

The BAF complex is "molecular machine," a group of proteins that remodel the way DNA is packaged in cells. It is made up of a dozen protein subunits specified by 29 different genes. Previous attempts to obtain a structural 3-D model of the BAF complex were based on protein molecules recombinantly engineered in the laboratory, "which were unable to recreate the entire complex," says the author.

BAF is one of several molecular "machines" that regulate the expression of genes in cells by modifying chromatin, a substance composed of DNA and protein. Chromatin packages the long DNA strand containing genes into more condensed units. A single cell contains hundreds of thousands of chromatin-modifying complexes, of which BAF is one type. Mutations in BAF, while they don't alter the DNA code of genes to cause cancer, disrupt DNA topology and accessibility, leading to aberrant gene expression and the growth of malignant tumors.

Using several powerful new analytic tools in combination, the investigators produced a model of the BAF complex's structure both as an isolated complex and in the form BAF takes when it binds to nucleosomes - spool-like units of chromatin around which DNA segments are wound. Binding to nucleosomes is necessary for BAF complexes to remodel chromatin and influence gene expression. One of the newest and most helpful tools the researchers used to obtain the structure of BAF bound to nucleosomes is called cryo-EM, a form of electron microscopy that can create high-resolution models of molecules in their native environment, and which scientists say is revolutionizing the field of structural biology. In this case, the human BAF complexes were too heterogeneous and flexible for the method to alone produce a high-resolution structure, but when paired with two other methods, known as cross-linking mass-spectrometry and homology modeling, the structural connectivity between the subunits became clearer.

The authors report that the BAF complex is made up of three modules which form a "C" shape and grip the nucleosome on opposite sides like a carpenter's C-clamp holds pieces of wood together. They discovered that the two regions of the BAF structure that grip the nucleosome are "hot spots" where cancer-causing mutations frequently occur and used experiments to show how mutations disrupt the normal regulation of chromatin by BAF complexes. The group also found other locations within the complex as to where known cancer mutations, contained in a database known as COSMIC (the Catalogue of Somatic Mutations in Cancer), structurally "cluster" and resolved their functions.

"Mapping such mutations on the structure of the BAF complex and understanding their functional impact has remained a major, unmet goal of the field at-large for decades," said the author. "This marks the beginning of an era in which we will be able to functionally "group" mutations that define specific tumor features and inform therapeutic opportunities."