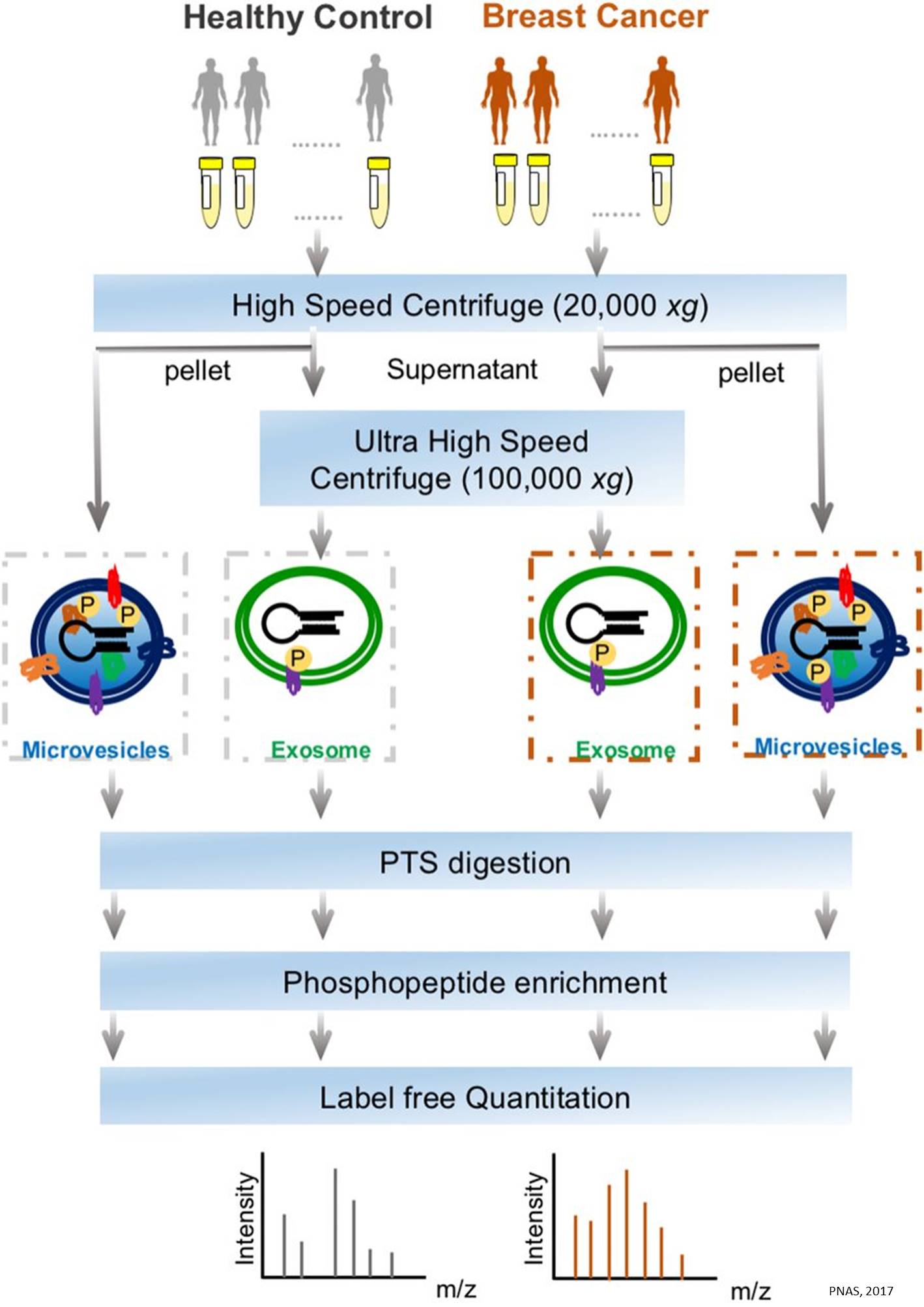 Doctors may soon be able to detect and monitor a patient's cancer with a simple blood test, reducing or eliminating the need for more invasive procedures, according new research.

Researchers identified a series of proteins in blood plasma that, when elevated, signify that the patient has cancer. Their findings were published in Proceedings of the National Academy of Sciences.

The work was done with samples from breast cancer patients, but it is possible the method could work for any type of cancer and other types of diseases. The work relies on analysis of microvesicles and exosomes in blood plasma.

Protein phosphorylation, the addition of a phosphate group to a protein can lead to cancer cell formation. So phosphorylated proteins, known as phosphoproteins, have been seen as prime candidates for cancer biomarkers. Until now, however, scientists weren't sure identification of phosphoproteins in blood was possible because the liver releases phosphatase into the bloodstream, which dephosphorylates proteins.

"There are so many types of cancer, even multiple forms for different types of cancer, that finding biomarkers has been discouraging," senior author said. "This is definitely a breakthrough, showing the feasibility of using phosphoproteins in blood for detecting and monitoring diseases."

The researchers used centrifuges to separate plasma from red blood cells, and high-speed and ultra-high-speed centrifuges to further separate microvesicles and exosomes. Those particles, which are released from cells and enter the bloodstream, may play a role in intercellular communication and are thought to be involved in metastasis, spreading cancer from one place to another in the body. They also encapsulate phosphoproteins, which the team identified using mass spectrometry.

"Extracellular vesicles, which include exosomes and microvesicles, are membrane-encapsulated. They are stable, which is important," senior author said. "The samples we used were 5 years old, and we were still able to identify phosphoproteins, suggesting this is a viable method for identifying disease biomarkers."

A simple blood test for cancer would be far less invasive than scopes or biopsies that remove tissue. A doctor could also regularly test a cancer patient's blood to understand the effectiveness of treatment and monitor patients after treatment to see if the cancer is returning.

"There is currently almost no way to monitor patients after treatment," senior author said. "Doctors have to wait until cancer comes back."

Authors plans to analyze increased levels of phosphoproteins in various types of cancer to determine whether there are patterns that would signify the type of cancer a patient has. The company, Tymora Analytical, started by authors is also developing technology that would allow doctors to insert blood samples onto a cartridge and analyze phosphoproteins present, eliminating the need for ultra-high-speed centrifuges that aren't practical in clinical settings.