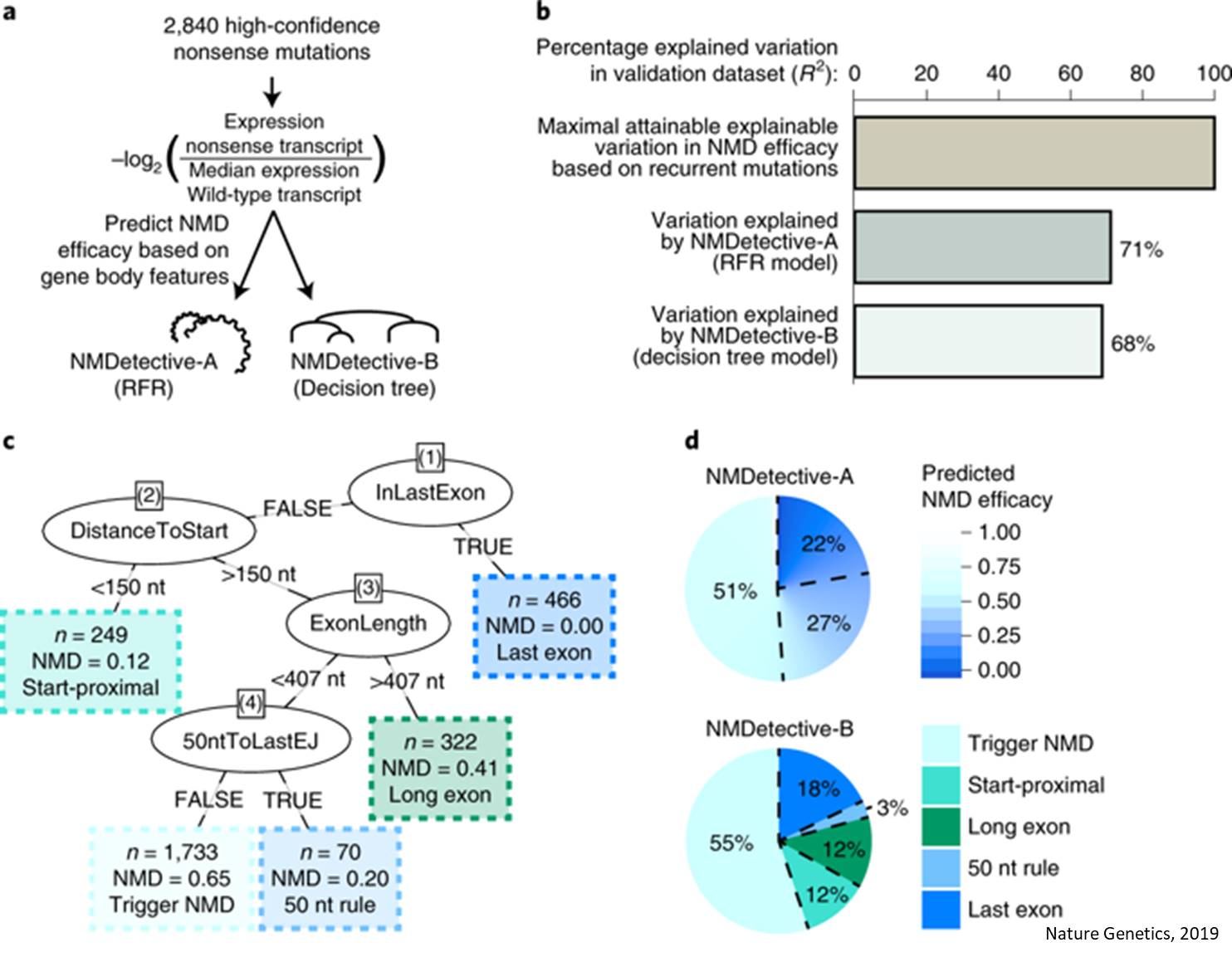 Scientists have developed an algorithm that can predict which cancer patients are more likely to benefit from immunotherapy.

Mutations in our DNA can disrupt protein synthesis, sometimes causing truncated proteins which don't work as intended. Known as nonsense mutations, these types of alterations can give rise to hereditary diseases and different types of cancer. To keep the number of truncated proteins to a minimum, human cells recognise and remove RNAs with nonsense mutations through a quality control process known as nonsense-mediated mRNA decay (NMD).

To better understand the effect of NMD on human disease, researchers built NMDetective, a tool describing every possible nonsense mutation that can occur in the human genome. Developed by large-scale statistical analyses based on machine learning, the algorithm identifies which mutations in the genome are susceptible to NMD.

As described in Nature Genetics, scientists used NMDetective to analyze thousands of genetic variants that give rise to hereditary diseases in humans. "We were surprised to observe that, in many cases, NMD activity was predicted to lead to a greater severity of the disease," says the  leader of the team that built the tool.

The results of the study suggests that pharmacological NMD inhibition could slow the progression of many different genetic diseases. To distinguish which patients would benefit from this therapy, it is necessary to apply a precision medicine approach to determine the mutation responsible for the disease and the effect of NMD on this mutation, and this is precisely where NMDetective comes into play.

Researchers also studied the role of NMD in cancer and the interaction between the tumor and the immune system. "We discovered that NMD activity is important for the prediction of successful outcome of immunotherapy in cancer," explains the lead. Researchers found NMD hides mutations that would otherwise trigger the immune system. Therefore, NMDetective can be used to analyse the mutations present in the tumor, in order to better distinguish between cancer patients that respond to immunotherapy from those who do not respond to immunotherapy.

"Tumors are riddled with genetic mutations that should make all sorts of weird proteins. The immune system should pick these up, identifying the cells gone wrong and destroying them," says another author. "But many of these weird proteins never actually get made because of NMD."

"This algorithm can distinguish which mutations will and won't trigger this error-checking system. What's exciting is that drugs that block NMD already exist, which could be used in conjunction with other treatments to help the immune system better recognize tumor cells," explains the author.

"Here we see an example where publicly available cancer genomics data can be 'reused' through machine learning approaches to better understand biological processes such as NMD," says lead author. "What makes this study especially exciting, is that we could directly translate this fundamental research into insights that are relevant for clinicians and patients."