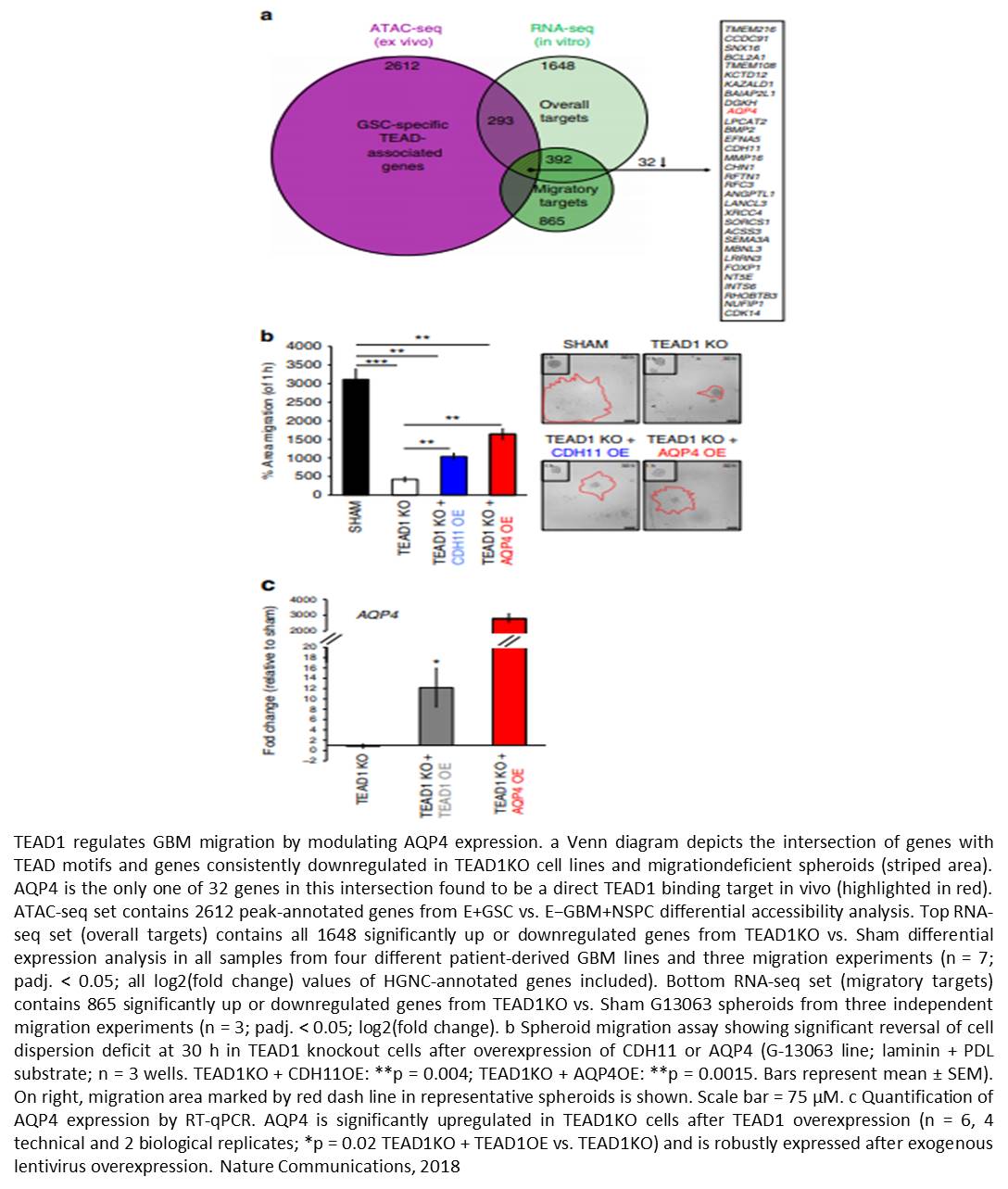 A specific protein called TEAD1 is an important regulator of tumor migration in glioblastoma, the most common brain tumor in adults, and deactivating this protein may stop tumor cells from migrating away from the main tumor mass, according to research published in the journal Nature Communications. The data garnered through this study may help increase the success rate and overall survival time after surgery for patients who are afflicted with this devastating form of tumor.

Glioblastoma carries a dismal prognosis, despite aggressive treatment. One of the main reasons glioblastoma cannot be cured is because of the tumor's unusual ability to rapidly crawl and spread through the patient's brain, a property referred to as "migration" or "infiltration." While many chemotherapy drugs can stop tumor cells from multiplying, treatment options to stop tumor cells from migrating do not yet exist. The diffusely infiltrative nature of glioblastoma tumor growth is a challenge for surgical therapy because infiltrative cells inevitably extend beyond the margin of apparently non-tumorous tissue around a tumor mass that has been surgically removed. Because the intrinsic biology of these cells is poorly understood and their movement is so devastating, there is a critical need for better understanding of the process of migration.

Previous research has implicated several transcription factors (special types of proteins that bind directly to DNA at specific sites along the genome to either activate or shut off particular genes) in the regulation of glioblastoma tumor growth and migration, but most of these studies were done in a petri dish. The environment of tumor cells in a dish is very different from the one within the patient's diseased brain. In a dish, cells are artificially stimulated to grow and divide, which has an impact on their movement and activity. Additionally, cells inside a dish lack the actual structural elements present inside the brain along which tumor cells migrate.

"Our study is one of the first to take human patient glioblastoma cells directly from the tumor immediately after surgery and isolate the most aggressive tumor subclones--the glioma stem cells--to specifically characterize the machinery responsible for tumor migration," said the senior author of the paper. "We found that the transcription factor TEAD1 directs the activity of genes responsible for tumor migration and, particularly, our research implicates the AQP4 gene as one of TEAD1's direct pro-migratory partners."

The team first characterized the epigenetic landscape (the machinery responsible for turning genes on and off) of aggressive glioblastoma cells and discovered a signature whose footprints relate specifically to tumor migration. After identifying TEAD1 as having the most enriched footprint in this migratory signature, researchers used the gene-editing technology known as CRISPR to delete TEAD1 from tumor cells. When TEAD1 was absent, cells lost their ability to migrate, both in vitro (in a petri dish) and in vivo (in the brain), and their migratory genes became inactive. When they added TEAD1 back, migratory abilities were partially restored.

The researchers then tested several potential places on the genome where TEAD1 may be binding in order to signal migration. One unexpected site of binding was at the gene encoding the AQP4 protein, which is responsible for controlling water movement that allows cells to change their shape as they penetrate through the brain. The team found that tumor cells without TEAD1 activity (the ones that could no longer migrate) turned the AQP4 gene off. However, if cells were provided with AQP4, either by giving them TEAD1 or by giving them AQP4 directly, they started migrating again.

"Our study data provides convincing evidence that TEAD1 signals through AQP4 to promote tumor migration and furthermore, that if we can inhibit activity of TEAD1, we can potentially stop tumor cells from migrating away from the main tumor mass," said the senior author. "This newfound information has important implications for brain tumor treatment, potentially increasing the success rate of removing the entire tumor during surgery or at least prolonging the time it takes for the tumor to come back."

The research team is actively testing TEAD1 drug inhibitors to see if they stop tumor cells from migrating in a dish or in laboratory animals, with the hope that one day in the near future, they will be able to offer new anti-migratory treatments for patients with infiltrative brain tumors.