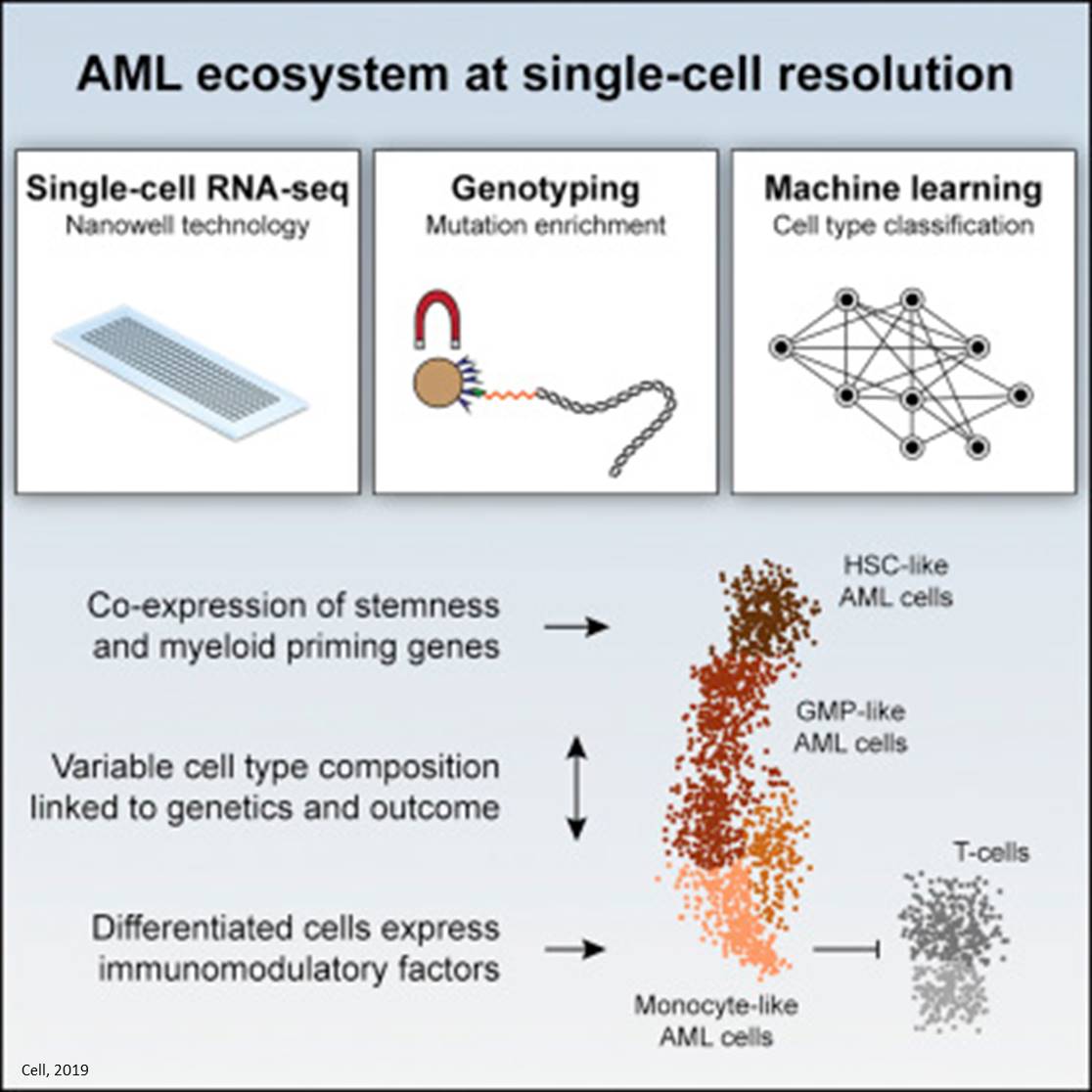 A team of researchers has used single-cell technologies and machine learning to create a detailed "atlas of cell states" for acute myeloid leukemia (AML) that could help improve treatment of the aggressive cancer.

AML is characterized by the accumulation of white blood cells in the bone marrow and blood. The disease is notoriously difficult to study because the bone marrow of AML patients contains a variety of normal and malignant cell types. This includes undifferentiated primitive cancer cells with stem cell-like properties and differentiated mature cancer cells that affect the tumor environment in different ways. AML cells also constantly acquire DNA mutations, branching into lineages of related "subclones."

In the new study, which will be published in the journal Cell investigators combined cutting-edge technologies--single-cell RNA (scRNA) sequencing, long-read nanopore DNA sequencing and machine learning--to distinguish normal cells from cancerous ones and organize them based on their DNA sequence and gene expression similarities.

scRNA sequencing captures a snapshot of a cell's entire transcriptome--that is, all the mRNA molecules present in a cell at a given moment. This allows researchers to break down a population of cells into distinct types and to track the evolution of cellular lineages. The team employed a new scRNA sequencing method to capture the full transcriptomes of nearly 40,000 bone marrow cells gathered from 16 AML patients and five healthy donors.

But the gene expression profile of AML cells can resemble that of normal ones. To address this challenge, the team performed single-cell genotyping on the bone marrow cells, screening them for a set of known AML genetic markers to pick out those that were cancerous. "To really nail this, we had to incorporate a third-generation DNA sequencing technique called long-read nanopore sequencing, which enhanced detection of mutations across the genome," the author said.

Long-read sequencing scans much longer DNA fragments, boosting the odds of capturing all mutations accumulated in a gene. It allowed the researchers to more efficiently identify descendants of differently mutated cells, called subclones, that can variably affect the cancer's growth rate, metastatic potential and response to therapy.

Lastly, the researchers employed a machine learning algorithm to bring the scRNA sequencing and genotyping data together. The end result was a map or "atlas" of different AML cell types and the normal blood cell types with which they co-exist in the bone marrow environment.

The atlas allowed the researchers to see at a glance not only which cells were cancerous, but also their states--primitive, differentiated or in the process of differentiating. Since tumor samples were gathered from patients at different timepoints, the researchers could also compare the developmental hierarchies of AML tumors between individuals and track the evolution of those hierarchies from first diagnosis through treatment and outcome.

The researchers show that the transcriptional programs of AML cells are aberrantly regulated. "In normal cells, development progresses in stages. You go from cell type X to cell type Y," another author said. "These leukemia cells co-express a mish-mash of genes from different stages."

The researchers also discovered multiple subclonal populations within a single AML patient. "In at least one case, the two subclones behaved completely differently and had different gene expression profiles," the author said. "One subclone was mostly differentiating while the other was arrested in a highly aggressive state, and the aggressive subclone had a mutation that was consistent with a poor patient prognosis."

The findings may also explain why therapies that harness T cells of the immune system to target tumors have been relatively less successful against AML. The researchers identified a class of cells that behaved like white blood cells known to suppress anticancer immune responses.

"You might assume that these are normal cells, but when you look at their genotype, you see that they harbor leukemic mutations," the author said. "These are cells that the tumor is producing to suppress the immune system. It's an adaptive survival mechanism for the tumor."

Their findings, the researchers note, should aid in the development of novel strategies for immunotherapy and precision medicine for the treatment of AML.

Wood windows are cooler than glass