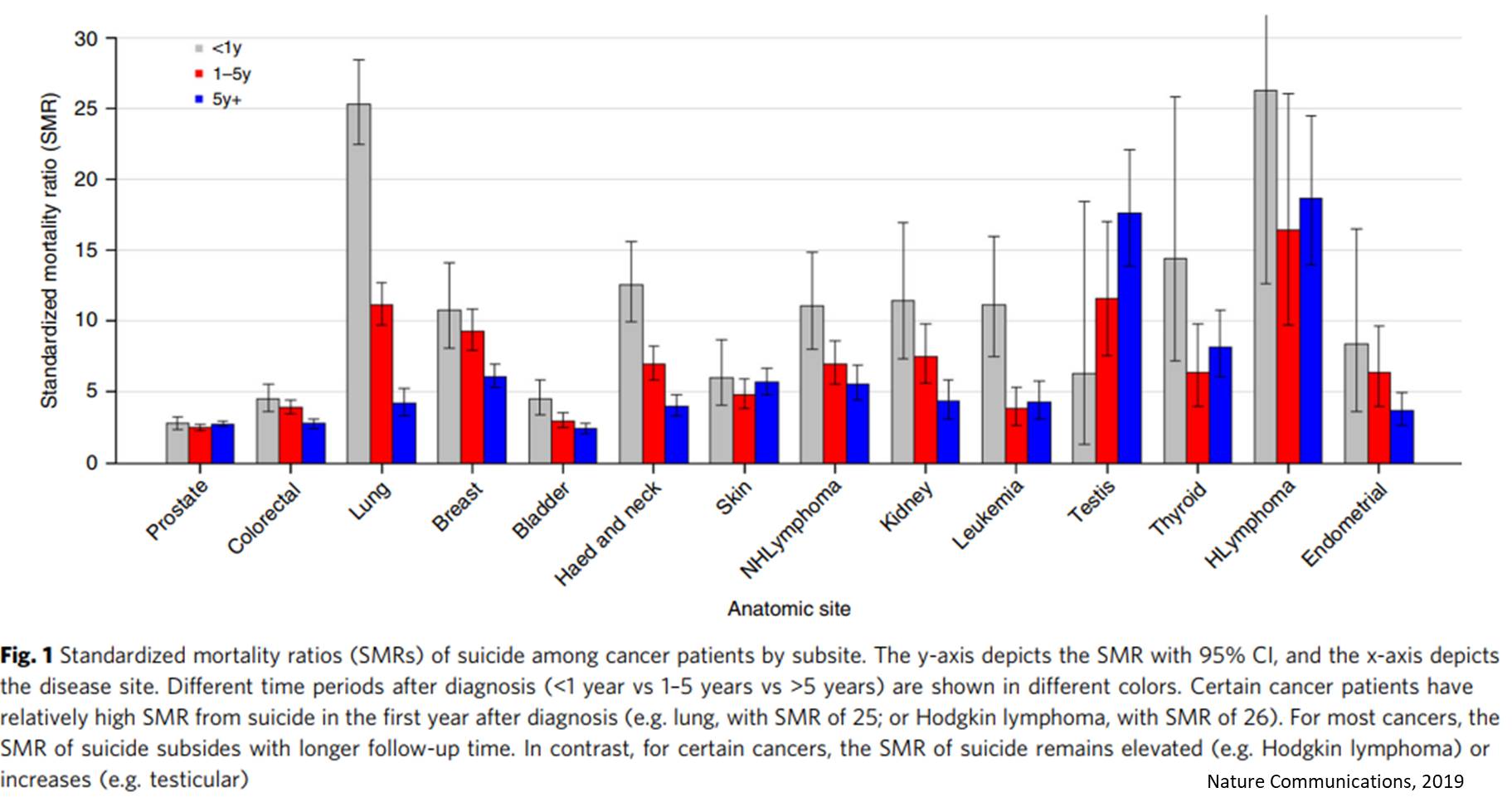 People with cancer are more than four times more likely to commit suicide than people without cancer, according to a group of researchers.

In a study using data on more than eight million cancer patients in the United States, the researchers also found that among people with cancer, white males; patients who were diagnosed at a younger age; and patients with lung, head and neck, testicular cancer, and lymphomas were more likely to commit suicide.

The study  published in Nature Communications -- highlights the importance of a comprehensive approach to treating cancer patients.

"Even though cancer is one of the leading causes of death in the United States, most cancer patients do not die from cancer, the patients usually die of another cause," the author said. "There are multiple competing risks for death, and one of them is suicide. Distress and depression can arise from cancer diagnosis, treatment, financial stress, and other causes. Ultimately, distress and depression may lead to suicide. Our goal was to quantify the risk of suicide among cancer patients."

The author said that while a lot of progress has been made in treating the cancer itself, not as much work and research has been put into how cancer affects patients mentally and emotionally. The researchers compared the suicide risk of cancer patients versus the general public, and they explored whether certain cancer patients had a higher risk than other patients.

The researchers used data gathered from the National Cancer Institute's Surveillance, Epidemiology, and End Results (SEER) program. SEER includes data about cancer incidence, survival, treatment, and age and year of diagnosis, and covers 28 percent of the US population.

For the study, the researchers used SEER data on more than 8.6 million patients who had been diagnosed with invasive cancer -- cancer that has spread beyond the tissue in which it originally developed -- between 1973 and 2014.

After analyzing the data, the researchers found that 13,311 of the patients in the dataset -- 0.15 percent -- died by suicide, more than four times the risk of the general population. This is a two-fold increase since a previous study in 2002 that reported a 1.9 increased risk.

Additionally, the researchers found that while the risk of suicide decreases five years after a diagnosis, the risk remains high for patients with Hodgkin lymphoma and testicular cancer.

"The interesting thing we found was that it does seem to matter at what age a patient is diagnosed and what type of cancer that person has," the author said. "Treatments for some cancers -- like leukemia and testicular cancer among adolescents and young adults, for example -- can decrease a patient's fertility, and that seems to be one of the risks for suicide in the long term. In contrast, elderly patients who are diagnosed with lung, prostate, and head and neck cancers, are at an increased risk of suicide for the remainder of their life. "

The researchers said the results could be used to help identify patients that may be at a higher risk for suicide and help health care providers tailor their treatments accordingly.

"This information could be helpful while developing guidelines and strategies for how and when to screen cancer patients for depression and distress," the author said. "For example, aiming suicide-prevention strategies at older patients and those with certain cancers, such as prostate, lung, leukemias and lymphomas, may be beneficial."

Additionally, the author said the study could help clinicians develop survivorship programs, which aim to care for and improve the quality of life for cancer patients that have gone through treatment and are on their way to recovery.