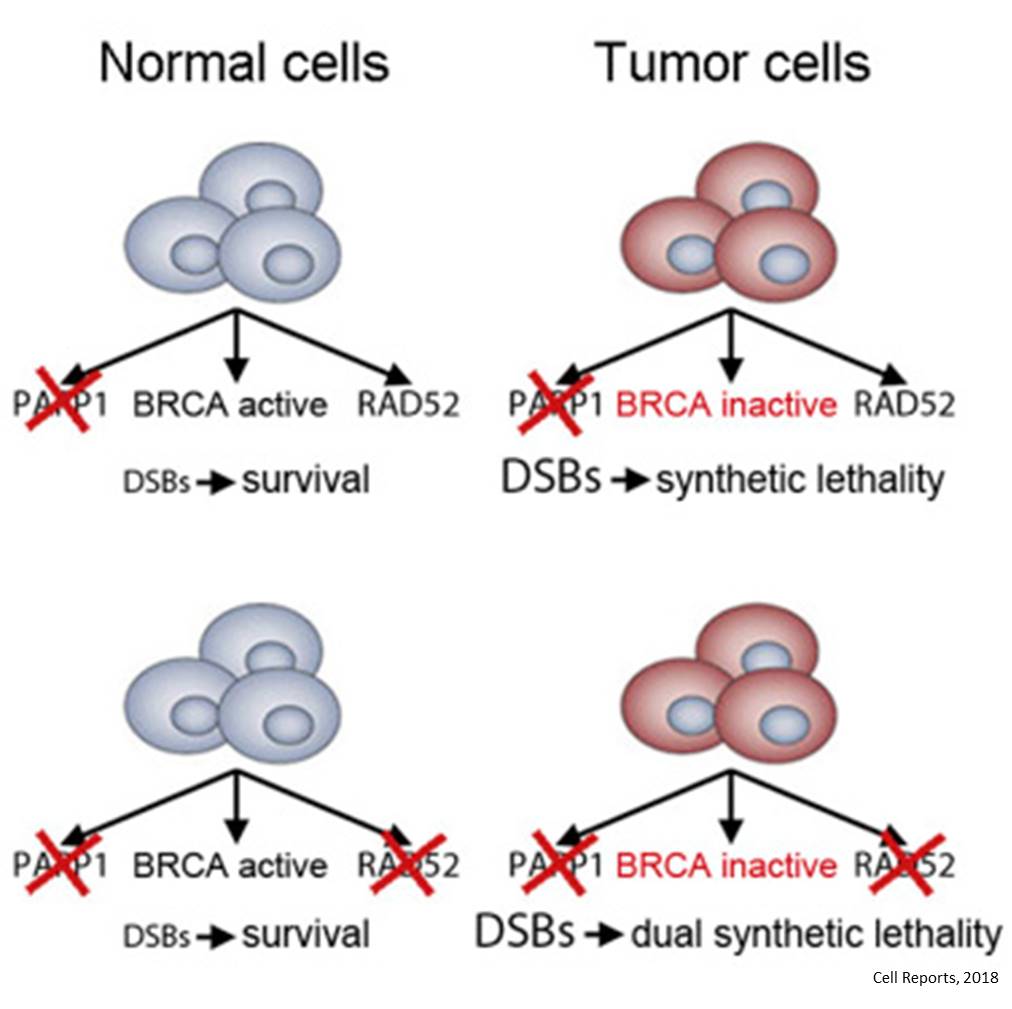 Over time, however, the effectiveness of PARP1 inhibition declines, and cancer relapses. According to the senior author, this happens because targeting one pathway is not enough. "The tumor cells eventually escape PARP1 inhibition by activating another backup to the BRCA-mediated repair pathway," senior author said. "Our previous work had suggested that RAD52-dependent pathways are a likely escape route, which led us to see whether simultaneous inhibition of both PARP1 and RAD52 could trigger more effective lethality."

The team first tested their idea in a series of experiments in BRCA-deficient solid tumor and leukemia cell lines in vitro. Using an experimental RAD52 inhibitor, they were able to show that RAD52 blockade enhanced synthetic lethal effects in cells treated with the PARP inhibitor olaparib, a drug approved by the Food and Drug Administration. For all tumor types, the dual treatment completely eradicated BRCA-deficient tumor cells.

The simultaneous targeting strategy was then tested against BRCA-deficient tumors in mice, in which the researchers recapitulated the effects of BRCA deficiency in breast cancer and in acute and chronic myelogenous leukemia. They found that dual inhibition exerted strong effects against tumors in vivo, showing greater activity than either agent alone.

Importantly, the teams' experiments showed, both in vitro and in vivo, that normal cells, with normal BRCA activity, are unaffected by the dual treatment. "Normal cells continue to use BRCA-mediated repair as their primary DNA repair pathway and do not rely heavily on PARP1 or RAD52," explained first author on the new paper. Leaving normal cells relatively unharmed helps limit the severity of side effects patients may experience with targeted cancer therapy.

In the near-term, the team also plans to continue investigating alternative DNA repair pathways, which are essential for tumor cells but expendable in normal cells. "One of our primary goals is to find additional targets to kill cancer cells, without increasing toxicity," senior author added.

Why do we remember emotional events better?

A small molecule that restores visual function after optic nerve in…