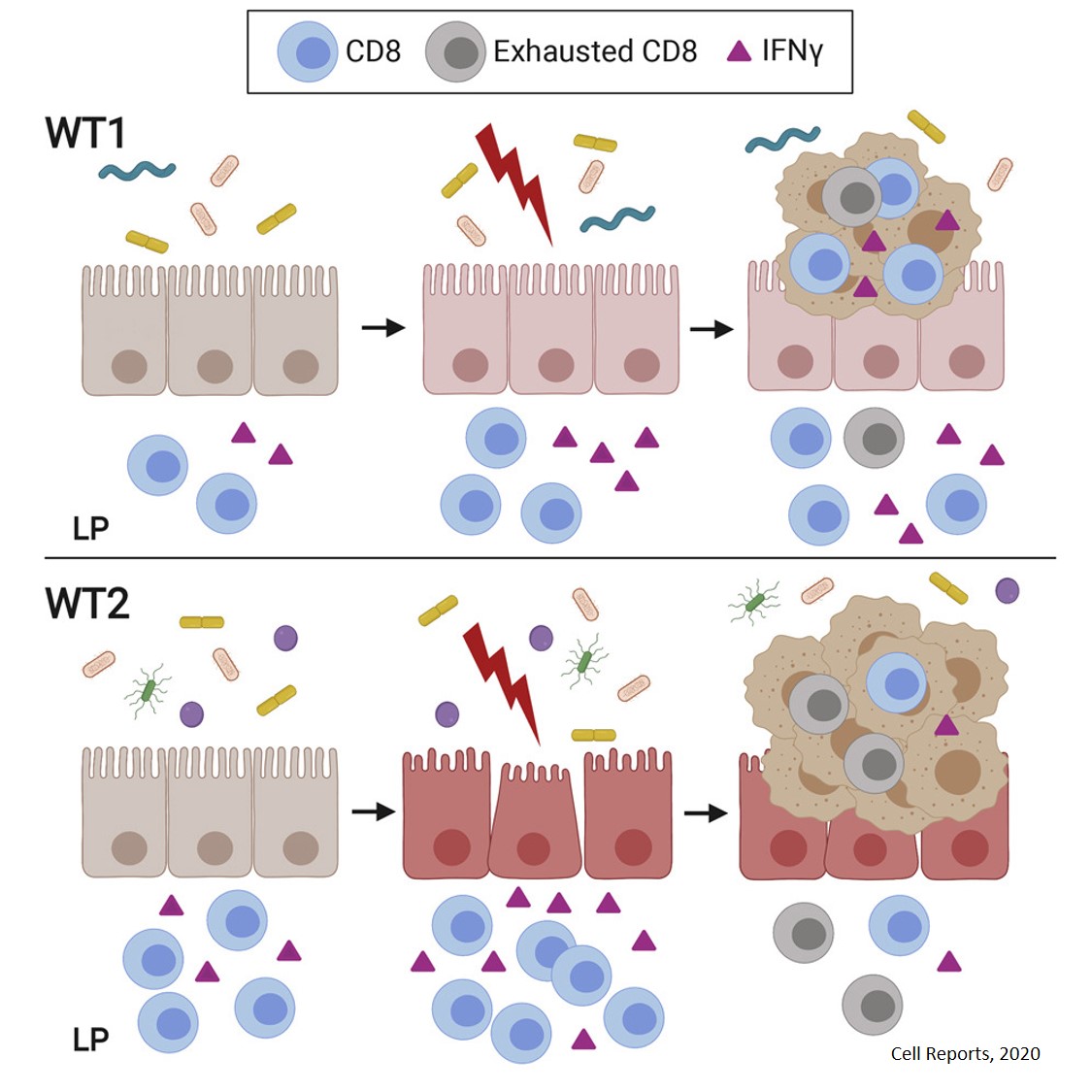 Researchers are shedding new light on the way microorganisms that live in the gastrointestinal tract can affect the development of colorectal cancer.

Some types of gut bacteria are better than others at stimulating certain immune cells, specifically CD8+ T cells, in the body, they found. And while these CD8+ T cells normally help protect the body against cancer, overstimulating them may promote inflammation and exhaust the T cells -- which can actually increase susceptibility to cancer, according to new mouse model study published in Cell Reports.

The work will help scientists pinpoint which populations of bacteria are tumor suppressive or tumor promoting and how, says study first author.

"There has also been a lot of excitement about the role bacteria may play in improving the effectiveness of immunotherapy," says senior study author. "This work suggests it may be a double edged sword -- and that promoting T cell exhaustion is something researchers need to watch out for."

The current study builds on previous work from the group, which found that disturbances of the gut microbiome can directly contribute to the development of cancer.

The group found that mice from two different research colonies had vastly different susceptibility to colorectal cancer when they were exposed to a carcinogen as well as an agent that promotes gastrointestinal inflammation.

The mice from the first colony grew an average of five tumors, while the mice from the second colony developed 15 tumors and had a more significant inflammatory response.

When the researchers sequenced fecal bacteria from the two different colonies, they found they had distinct microbiomes composed of different types of bacteria.

"This was exciting because my lab is very interested in which bacteria have the biggest impact on colorectal cancer risk, and by what mechanisms," the senior author says.

To better understand what was causing the differences the researchers were seeing in the two different colonies of mice, they transplanted gut bacteria from each of the two colonies into genetically identical mice that had been bred in a bacteria free environment. Once again, mice with bacteria from the second colony fared far worse.

"This showed that the different gut microbiota directly contributed to tumor development," the first author notes. "Our data ultimately revealed nine different bacterial populations that may have tumor-suppressive or tumor-promoting activity."

The team next conducted experiments to better understand what was driving the increased inflammation and tumor growth associated with the bacteria from the second mouse colony.

Through immune cell profiling, they found that there were more T cells in the colon tissue of mice with bacteria from the second colony, and many more of a type of cell called CD8+.

"It's a little counter intuitive, since T cells and CD8+ cells are usually associated with better outcomes in colorectal cancer patients," the senior author says. "We hypothesized that these cells get over-activated in the presence of certain bacteria and then exhausted, leaving them less capable of killing tumor cells."

When the bacteria from the second mouse colony were transplanted into mice that were engineered to lack CD8+ T cells, fewer tumors developed, supporting T cells' role in promoting the growth of the cancer in the presence of certain bacteria, Chen notes.

Meanwhile, the lab continues to build on the research as it investigates the mechanisms by which different bacteria may contribute to promoting or protecting against the development of colorectal cancer.

Why the flu vaccine is less effective in the elderly

Saline water better than soap and water for cleaning wounds