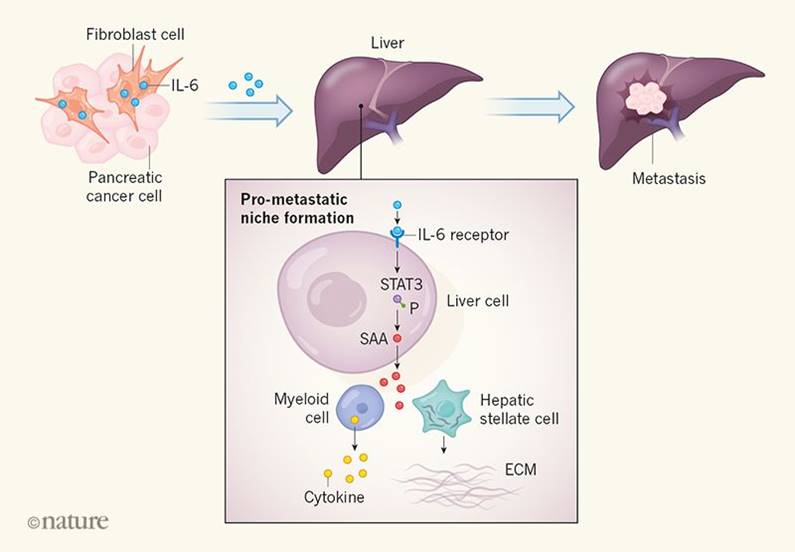 When cancer spreads to another organ, it most commonly moves to the liver, and now researchers say they know why. A new study, published in Nature, shows hepatocytes - the chief functional cells of the liver - are at the center of a chain reaction that makes it particularly susceptible to cancer cells. These hepatocytes respond to inflammation by activating a protein called STAT3, which in turn increases their production of other proteins called SAA, which then remodel the liver and create the "soil" needed for cancer cells to "seed." The researchers show that stopping this process by using antibodies that block IL-6 - the inflammatory signal that drives this chain reaction - can limit the potential of cancer to spread to the liver.

"The seed-and-soil hypothesis is well-recognized, but our research now shows that hepatocytes are the major orchestrators of this process," said senior author.

For this study, the team first used mouse models of pancreatic ductal adenocarcinoma (PDAC), the most common type of pancreatic cancer and currently the third leading cause of cancer death in the United States. They found that nearly all hepatocytes showed STAT3 activation in mice with cancer, compared to less than two percent of hepatocytes in mice without tumors. They also show that this same biology could be seen in patients with pancreatic cancer as well colon and lung cancer.

Genetically deleting STAT3 only in hepatocytes effectively blocked the increased susceptibility of the liver to cancer seeding in mice. The team further showed that IL-6 controls STAT3 signaling in these cells and instructs hepatocytes to make SAA, which acts as an alarm to attract inflammatory cells and initiate a fibrotic reaction that together establish the "soil."

The study also found that IL-6 drives changes in the liver whether there's a tumor present or not, implying that any condition associated with increased IL-6 levels - such as obesity or cardiovascular disease, among others - could affect the liver's receptiveness to cancer. Researchers say this provides evidence that therapies which target hepatocytes may be able to prevent cancer from spreading to the liver, a major cause of cancer mortality.