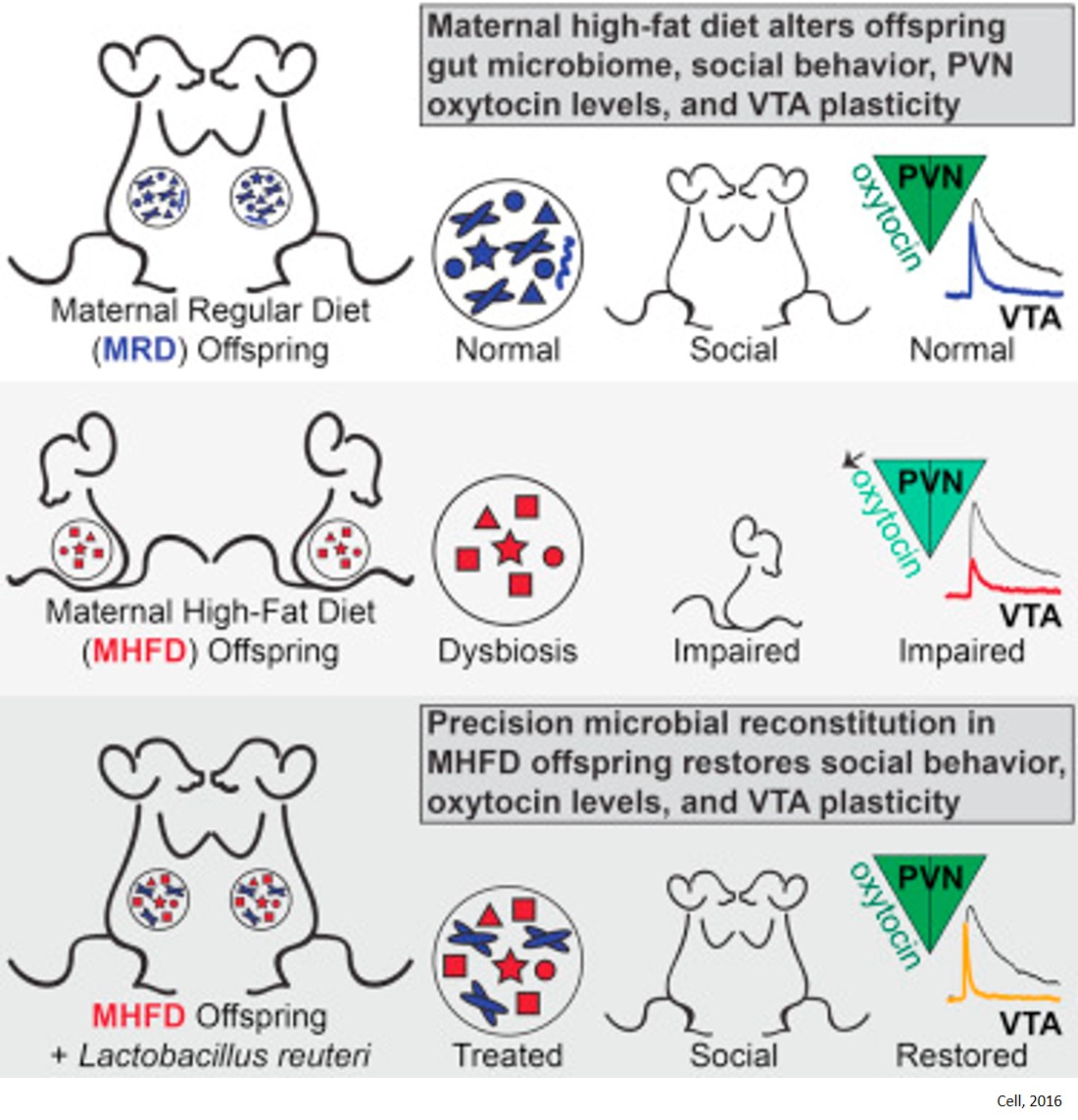 The absence of one specific species of gut bacteria causes social deficits in mice, researchers at Baylor College of Medicine report in Cell. By adding this bacterial species back to the guts of affected mice, the researchers were able to reverse some of the mice's behavioral deficits, which are reminiscent of symptoms of autism spectrum disorders (ASDs) in humans. The investigators are now looking to explore the effects of probiotics on neurodevelopmental disorders in future work.

"Other research groups are trying to use drugs or electrical brain stimulation as a way to reverse some of the behavioral symptoms associated with neurodevelopmental disorders--but here we have, perhaps, a new approach," says senior author. "Whether it would be effective in humans, we don't know yet, but it is an extremely exciting way of affecting the brain from the gut."

The inspiration for the paper came from human epidemiological studies that have found that maternal obesity during pregnancy could increase children's risk of developing neurodevelopmental disorders, including ASDs. In addition, some individuals with ASD also report recurring gastrointestinal problems. With emerging research showing how diet can change the gut microbiome and how gut microbes can influence the brain, researchers suspected there could be a connection.

To begin, the researchers fed approximately 60 female mice a high-fat diet that was the rough equivalent of consistently eating fast food multiple times a day. They bred the mice and waited for them to bear young. The offspring stayed with their mother for three weeks and then were weaned onto a normal diet. After a month, these offspring showed behavioral deficits, such as spending less time in contact with their peers and not initiating interactions.

"First we wanted to see whether there was a difference in the microbiome between the offspring of mouse mothers fed a normal diet versus those of mothers fed a high-fat diet. So, we used 16S ribosomal RNA gene sequencing to determine the bacterial composition of their gut. We found a clear difference in the microbiota of the two maternal diet groups," says first author. "The sequencing data was so consistent that by looking at the microbiome of an individual mouse we could predict whether its behavior would be impaired."

First author next tested whether the specific differences in the microbiome were causative factors underlying the social impairments in offspring of mothers fed a high-fat diet. Because mice eat each other's poop, the researchers housed the animals together so that they would acquire microbiota from their cagemates. When socially impaired three-week-old mice born to mothers on a high-fat diet were paired with normal mice, a full restoration of the gut microbiome and a concurrent improvement in behavior was observed within four weeks.

The investigators concluded that one or more beneficial bacterial species might be important for normal social behavior. Fecal-transplant experiments in mice without microbiota (germ-free mice) provided causal evidence that an imbalanced microbial ecology in the mice born to mothers on a high-fat diet is responsible for their social deficits.

The investigators next wanted to know the specific bacterial species that could be affecting the social behavior of the mice. Whole-genome shotgun sequencing revealed one type of bacteria, Lactobacillus reuteri, which was reduced more than nine-fold in the microbiome of mice born to mothers on the high-fat diet.

"We cultured a strain of L. reuteri originally isolated from human breast milk and introduced it into the water of the high-fat-diet offspring. We found that treatment with this single bacterial strain was able to rescue their social behavior," author says. Other ASD-related behaviors, such as anxiety, were not restored by the reconstitution of the bacteria. Interestingly, the authors found that L. reuteri also promoted the production of the "bonding hormone" oxytocin, which is known to play a crucial role in social behavior and has been associated with autism in humans.

The authors wondered whether the reward circuitry in the socially impaired mice was dysfunctional. "We found that in response to social interaction there was a lack of synaptic potentiation in a key reward area of the brain that could be seen in the normal control mice," senior author says. "When we put the bacteria back in the maternal-high-fat-diet offspring, we could also restore the changes in synaptic function in the reward circuitry."

The researchers believe that their work, which uses a human bacterial species to promote oxytocin levels and improve social behavioral deficits in deficient mice, could be explored as a probiotic intervention for the treatment of neurodevelopmental disorders in humans. "This is where the science is unexpectedly leading us. We could potentially see this type of approach developing quite quickly not only for the treatment of ASD but also for other neurodevelopmental disorders; anyway, this is my gut feeling," senior author says.