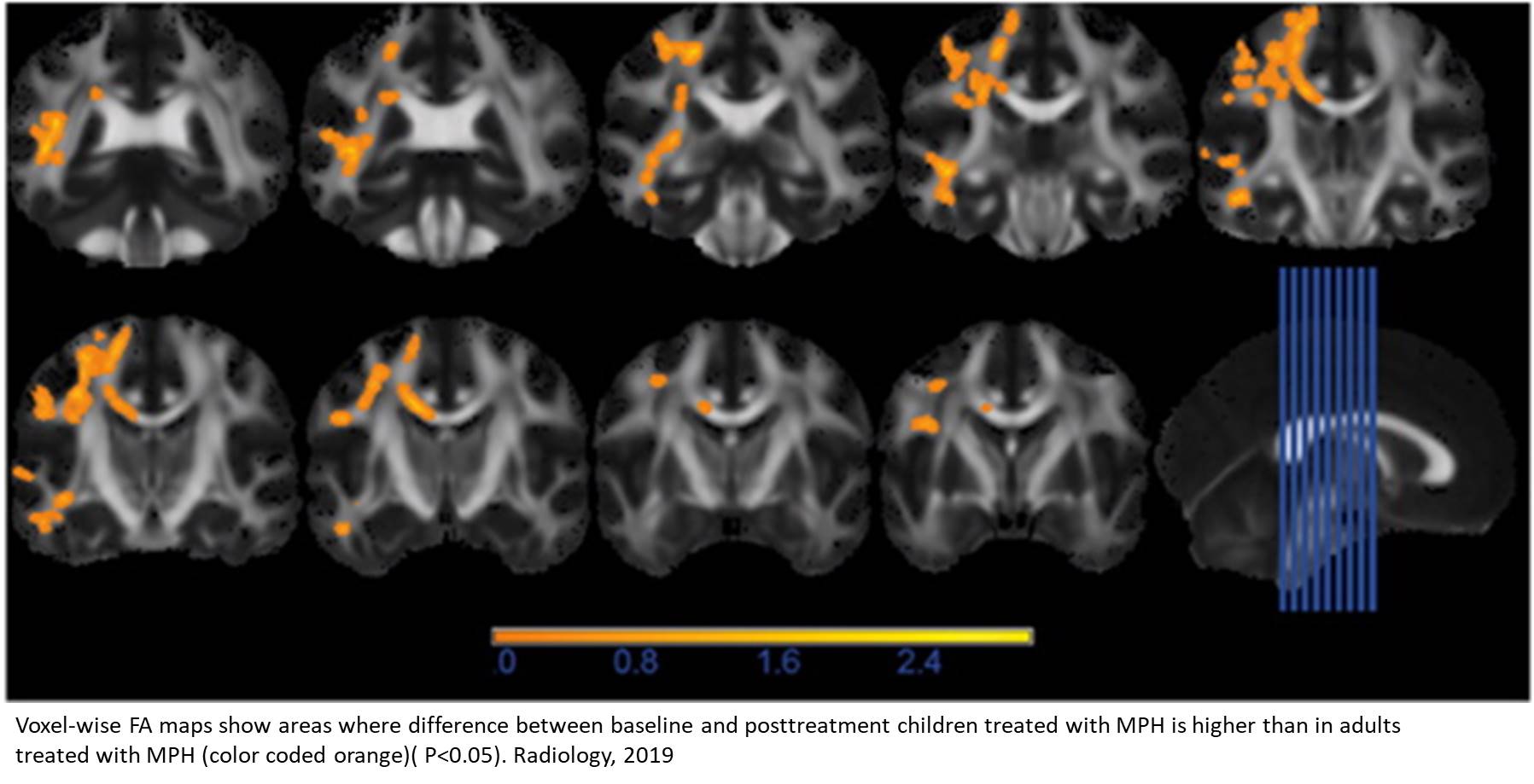 A drug used to treat attention-deficit/hyperactivity disorder (ADHD) appears to affect the development of the brain's signal-carrying white matter in children with the disorder, according to a study published in the journal Radiology. The same effects were not found in adults with ADHD.

Methylphenidate (MPH), sold under trade names including Ritalin and Concerta, is a commonly prescribed treatment for ADHD that is effective in up to 80 percent of patients. However, not much is known about its effect on the development of the brain, including the brain's white matter, which is important for learning and brain functions and coordinating communication between different brain regions.

To find out more about MPH's effects on white matter development, the researchers performed a study of 50 boys and 49 young adult men diagnosed with ADHD. All patients were medication-naïve; that is, they had never received MPH prior to the study.

"Previous studies all have tried to statistically control for the effects of ADHD medications," said study senior author. "But we are the first to study medication-naïve patients in this context, which, of course, is crucial if you want to know how ADHD medications affect the developing brain."

Patients received either MPH or a placebo for 16 weeks. Before and one week after treatment cessation, the participants underwent MRI including diffusion tensor imaging (DTI), a technique that helps assess white matter. DTI provides a measure called fractional anisotropy (FA), which is thought to reflect important aspects of white matter such as nerve fiber density, size and myelination--the process of coating nerve fibers to protect the nerve and help it carry signals more efficiently.

In boys with ADHD, four months of treatment with MPH was associated with increased white matter FA. The effects were age dependent, as they were not observed in adults treated with MPH.

"The results show that ADHD medications can have different effects on the development of brain structure in children versus adults," the senior author said. "In adult men with ADHD, and both boys and adult men receiving placebo, changes in FA measures were not present, suggesting that the effects of methylphenidate on brain white matter are modulated by age."

The authors are studying the long-term implications of these findings on ADHD behavior, which have yet to be established. Many ADHD patients are on medications for years, so the long-term effects of MPH treatment represent a vital area of research. In the meantime, the researchers want to see tighter regulations for prescribing ADHD medications, since MPH is being prescribed not only to increasing numbers of children, but also at younger ages.

"What our data already underscore is that the use of ADHD medications in children must be carefully considered until more is known about the long-term consequences of prescribing methylphenidate at a young age," the author said. "The drug should only be prescribed to children who actually have ADHD and are significantly affected by it."

According to the Center for Disease Control and Prevention, based on parent reporting, approximately 5.2 percent of American children between the ages of 2 and 17 take ADHD medication.