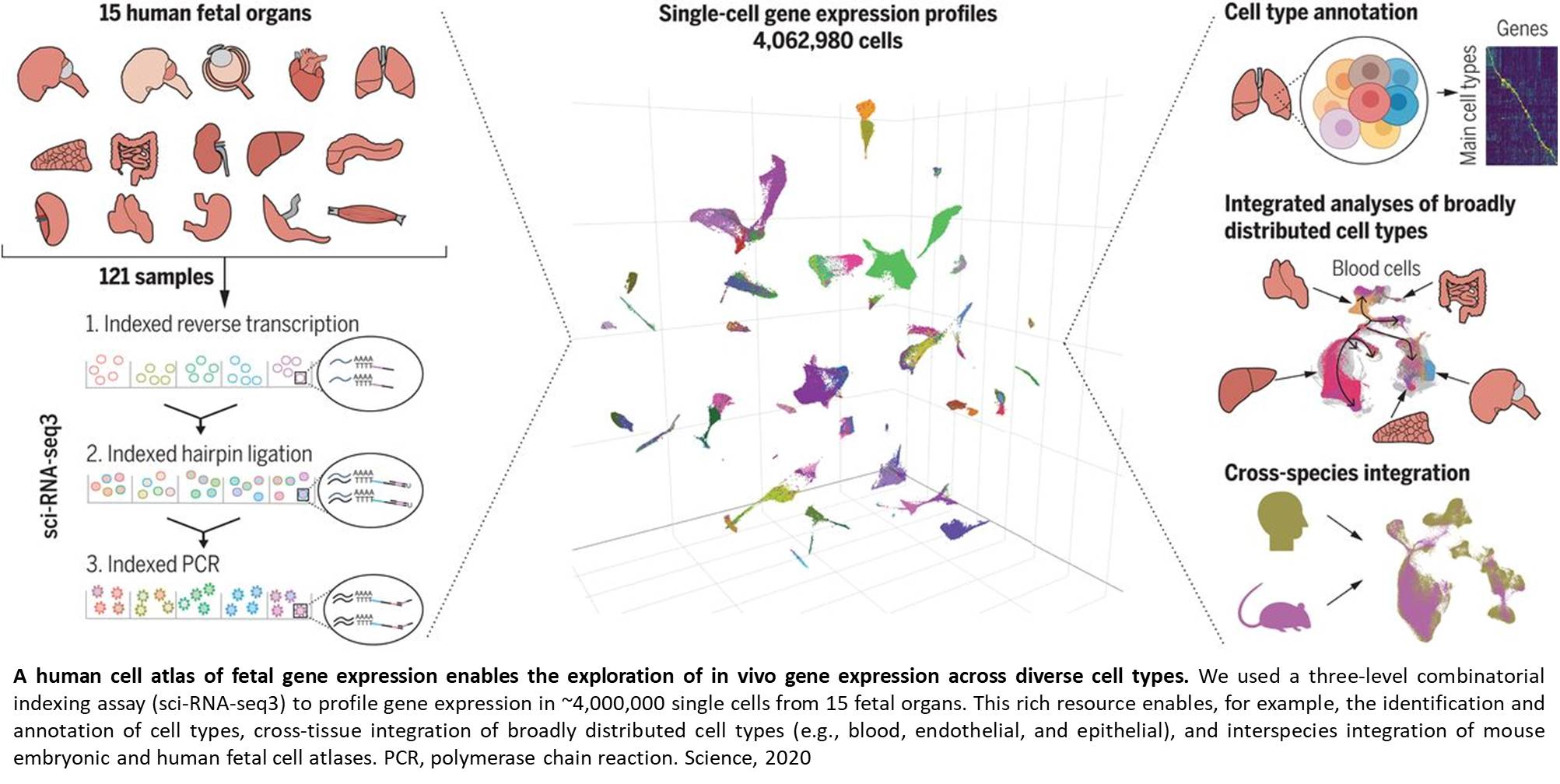 Researchers have created two cell atlases that track gene expression and chromatin accessibility during the development of human cell types and tissues.

One atlas maps gene expression within individual cells across 15 fetal tissues. The second atlas maps the chromatin accessibility of individual genes within the cells.

Together, the atlases provide a fundamental resource for understanding gene expression and chromatin accessibility in human development that is unprecedented in scale. Moreover, the techniques described in the two papers make it possible to generate data on gene expression and chromatin accessibility for millions of cells. The atlases are described in back-to-back publications in the journal Science.

Gene expression is the process in which a cell uses the instructions stored in its DNA to direct protein synthesis. These proteins, in turn, determine a cell's structure and function. The gene expression atlas maps where and when gene expression occurs in different cell types as they grow and develop.

"From these data, we can directly generate a catalog of all major cell types across human tissues, including how those cell types might vary in their gene expression across tissues," said lead author.

To create the atlas, the researchers profiled gene expression across 15 types of fetal tissue by using a technique called sci-RNA-seq3. This technique labels each cell with a unique combination of three DNA "barcodes," thereby allowing the researchers to keep track of cells without physically separating them.

Once the sequences were obtained, they used computer algorithms to recover the single cell information, cluster cells by type and subtype, and identify their developmental trajectories. The scientists profiled over 4 million single cells, and identified 77 main cell types and approximately 650 cell subtypes.

They also compared the atlas to an existing atlas of mouse embryonic development. Co-senior author explained, "When we combine this data with previously published data, we can directly delineate the cell's developmental path for all major cell types."

The second atlas, of DNA accessibility, maps material called chromatin that allows DNA to be tightly packed into the cell nucleus. Chromatin can be open and "accessible" to the molecular machinery that reads the genetic instructions encoded in the DNA or closed and "inaccessible." Knowing regions of DNA that are open and closed can tell how a cell chooses to turn genes on and off.

Studying chromatin gives you a sense of the regulatory "grammar" of the cell," another co-senior author said. "The short stretches of DNA that are open, or accessible, are enriched for certain 'words,' which are, in turn, the basis for the cell to specify that it wants certain genes on."

To profile DNA accessibility in individual cells, the scientists developed a new method, called sci-ATAC-seq3. Like sci-RNA-seq3, this technique also uses three different DNA "barcodes" in each cell to tag and track individual cells. However, rather than identifying all the currently expressed sequences, sci-ATAC-seq3 captures and sequences open chromatin sites.

The scientists generated nearly 800,000 single-cell chromatin accessibility profiles at about 1 million sites across 15 fetal tissues in this study. They asked which proteins were likely to interact with accessible DNA sites in each cell and how those interactions can explain the cell type. This analysis defines the control switches for development within the genome. They also identified sites of chromatin accessibility that might be associated with diseases.

"This tells us what part of the genome might be functional. We still do not know what percentage of the genome that doesn't encode for genes can be involved in gene regulation. Our atlas now provides that information for many cell types," said a co-lead author.