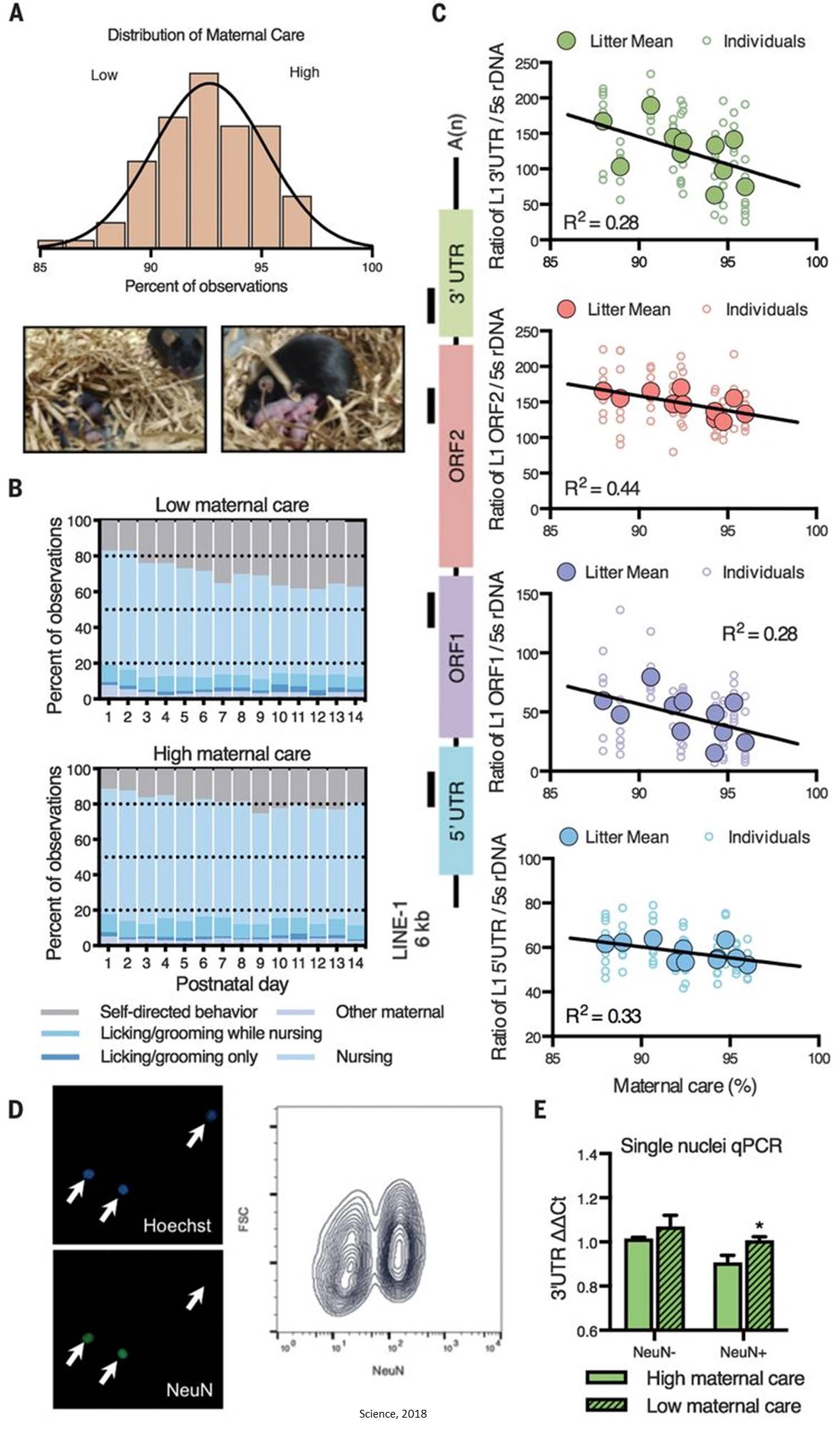 In the perennial question of nature versus nurture, a new study suggests an intriguing connection between the two. Scientists report in the journal Science that the type of mothering a female mouse provides her pups actually changes their DNA. The work lends support to studies about how childhood environments affect brain development in humans and could provide insights into neuropsychiatric disorders such as depression and schizophrenia.

"We are taught that our DNA is something stable and unchanging which makes us who we are, but in reality it's much more dynamic," says senior author said. "It turns out there are genes in your cells that are capable of copying themselves and moving around, which means that, in some ways, your DNA does change."

For at least a decade, scientists have known that most cells in the mammalian brain undergo changes to their DNA that make each neuron, for example, slightly different from its neighbor. Some of these changes are caused by "jumping" genes--officially known as long interspersed nuclear elements (LINEs)--that move from one spot in the genome to another. In 2005, the lab discovered that a jumping gene called L1, which was already known to copy and paste itself into new places in the genome, could jump in developing neuronal brain cells.

The team had hypothesized that such changes create potentially helpful diversity among brain cells, fine-tuning function, but might also contribute to neuropsychiatric conditions.

"While we've known for a while that cells can acquire changes to their DNA, it's been speculated that maybe it's not a random process," says first author of the study. "Maybe there are factors in the brain or in the environment that cause changes to happen more or less frequently."

To find out, researchers began by observing natural variations in maternal care between mice and their offspring. They then looked at DNA from the offspring's hippocampus, which is involved in emotion, memory and some involuntary functions. The team discovered a correlation between maternal care and L1 copy number: mice with attentive mothers had fewer copies of the jumping gene L1, and those with neglectful mothers had more L1 copies, and thus more genetic diversity in their brains.

To make sure the difference wasn't a coincidence, the team conducted a number of control experiments, including checking the DNA of both parents of each litter to make sure the offspring didn't just inherit their numbers of L1s from a parent, as well as verifying that the extra DNA was actually genomic DNA and not stray genetic material from outside the cell nucleus. Lastly, they cross-fostered offspring, so that mice born to neglectful mothers were raised by attentive ones, and vice versa. Initial results of the correlation between L1 numbers and mothering style held: mice born to neglectful mothers but raised by attentive ones had fewer copies of L1 than mice born to attentive mothers but raised by neglectful ones.

The researchers hypothesized that offspring whose mothers were neglectful were more stressed and that somehow this was causing genes to copy and move around more frequently. Interestingly, there was no similar correlation between maternal care and the numbers of other known jumping genes, which suggested a unique role for L1. So, next, the team looked at methylation--the pattern of chemical marks on DNA that signals whether genes should or should not be copied and that can be influenced by environmental factors. In this case, methylation of the other known jumping genes was consistent for all offspring. But it was a different story with L1: mice with neglectful mothers had noticeably fewer methylated L1 genes than those with attentive mothers, suggesting that methylation is the mechanism responsible for the mobility of the L1 gene.

"This finding agrees with studies of childhood neglect that also show altered patterns of DNA methylation for other genes," says the senior author. "That's a hopeful thing, because once you understand a mechanism, you can begin to develop strategies for intervention"

The researchers emphasize that at this point it's unclear whether there are functional consequences of increased L1 elements. Future work will examine whether the mice's performance on cognitive tests, such as remembering which path in a maze leads to a treat, can be correlated with the number of L1 genes.

Exercise may slow brain aging by 10 years for older people Why anxiety peaks in adolescence