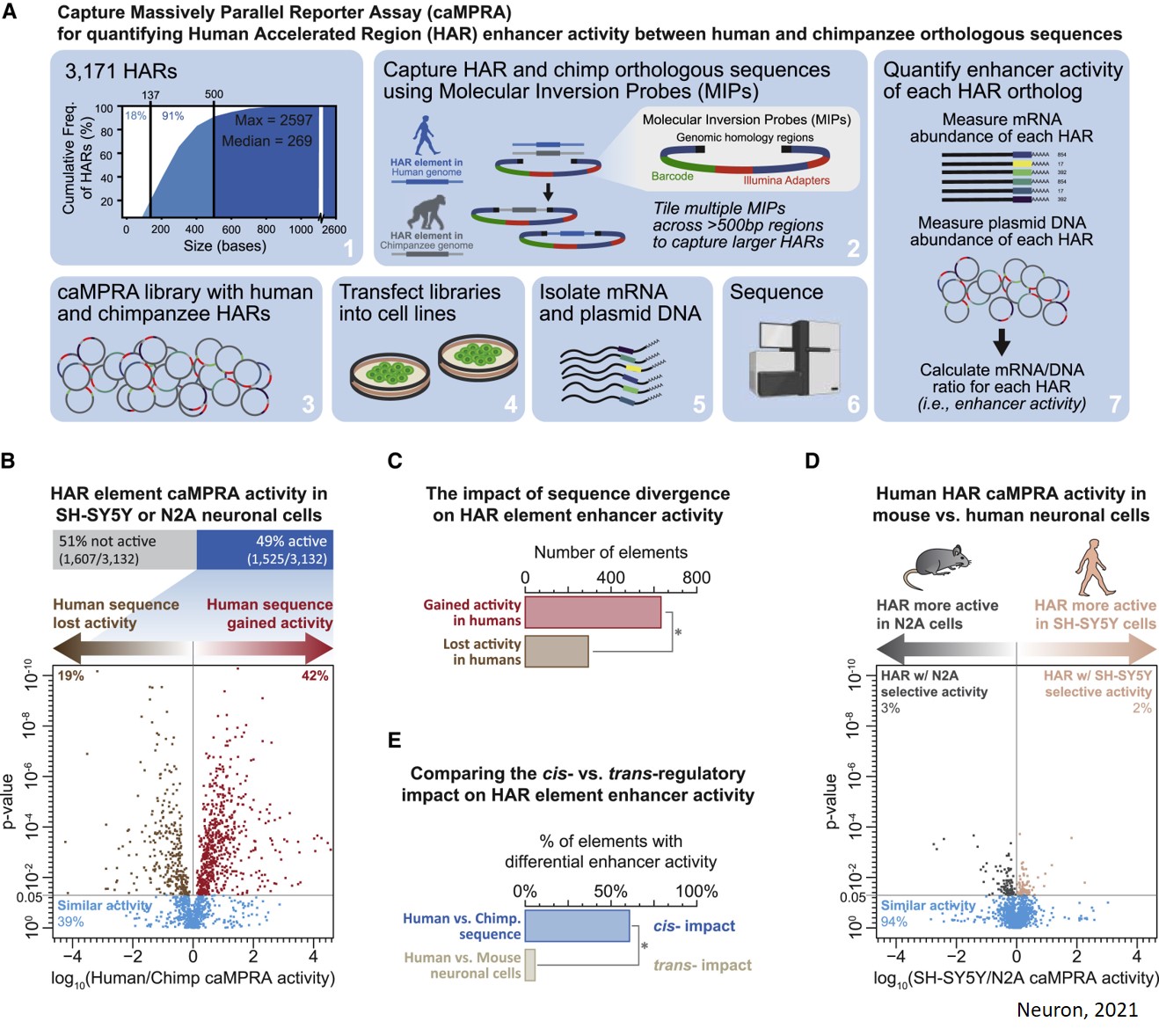 More than 3,000 regions in the human genome are very different in people from in any other mammals, including our closest primate relatives. Now, a study reported in the journal Neuron  has evidence to confirm that nearly half of these so-called human accelerated regions (HARs) have played an important role in rewriting the course of human brain development, offering important insight into the genetic basis of human evolution.

“Probably one of the most interesting questions in neuroscience is, ‘What makes us human?’” says the senior author. “Specifically, what is it about the human brain that differentiates it from those of other closely related species? Looking at human accelerated regions provided us with a very targeted way to investigate that question from a genetic perspective.”

To systematically identify which of the 3,171 previously identified HARs are most likely to be contributing to recent evolution of the human cerebral cortex, the researchers examined the role of these regions in regulating genes in studies of multiple human and mouse cell types and tissues.

“We knew going into this study that many HARs were likely to function as regulators of gene expression in the brain, but we knew very little about which cell types in the brain they worked in, where, or at what time in the human lifespan,” explains one of the study’s first authors in the lab. “Our goal was to fill in these gaps of knowledge about which HARs had important roles in the brain, and how, so that we and other researchers could take the most important ‘brain HARs’ and perform deeper tests of their evolutionary function.”

To overcome the limitations of earlier methods, the authors developed an applied approach called CaptureMPRA. The new method leverages barcoded molecular inversion probes to capture target sequences that capture entire HAR elements and their surrounding DNA, overcoming some limitations of prior techniques. Using this approach, they looked for important differences in HAR enhancer function between humans and chimpanzees.

They also integrated this data with epigenetic data at HARs in human fetal neural cells to identify HARs that looked likely to have an important role in guiding human-specific brain development. Some of the activity they uncovered was specific to the brain, as compared to other organs in the body. They also found activity that was even more specific to certain cell types in the fetal brain, as opposed to brains of adults.

Overall, the new findings show that many HARs do indeed appear to act as neurodevelopmental enhancers, the researchers report. The new data suggests that, as those human sequences diverged from other mammals, they have largely increased their role as neuronal enhancers.

The researchers also show that one HAR-regulated gene in particular, called PPP1R17, has undergone rapid change in both cell-type and developmental expression patterns between non-primates and primates and between non-human primates and humans. They went on to show that PPP1R17 slows the progression of neural progenitor cells through the cell cycle. This is notable given that lengthening of the cell cycle in non-human primates and humans is known to force a slowing of neurological development, an important feature of the human brain.

The new findings define many HARs that play key roles in neuronal gene regulatory programs; nearly half of all HARs show reproducible chromatin accessibility and enhancer activity in neural cells and tissue, according to the researchers. They’ve also developed an easily searchable online resource (the HARHub) consisting of the new data and previously published datasets of common and rare human HAR sequence variation. This databank now serves as a resource for scientists to make even more discoveries. Already, it has offered intriguing insights.

“Our work provides an important advance in studying many genomic regions at once to help us piece together the very complicated but compelling picture of human brain evolution,” the senior author says. “Our data suggest that evolution of the human brain involved changes in dozens or perhaps even hundreds of sites in the genome, rather than just a single key gene.”