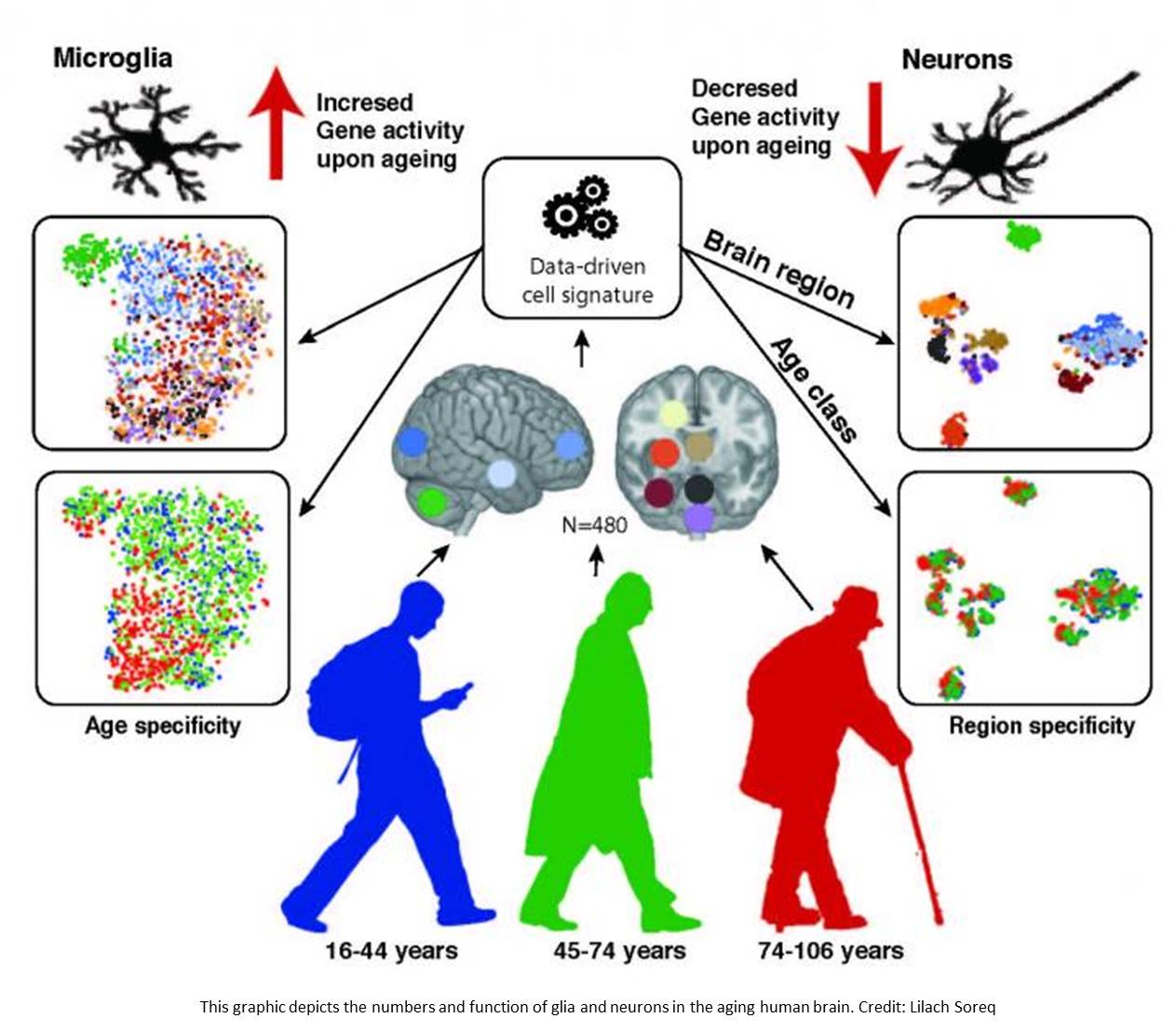 The difference between an old brain and a young brain isn't so much the number of neurons but the presence and function of supporting cells called glia. In Cell Reports, researchers who examined postmortem brain samples from 480 individuals ranging in age from 16 to 106 found that the state of someone's glia is so consistent through the years that it can be used to predict someone's age. The work lays the foundation to better understand glia's role in late-in-life brain disease.

"We extensively characterized aging-altered gene expression changes across 10 human brain regions and found that, in fact, glial cells experience bigger changes than neurons," says a neurobiologist, who led the study. "There's quite a bit of regional information that will be of interest to different people--for example some will notice a very unique pattern of astrocyte-specific changes in the substantia nigra--and we provide a lot of data that still needs to be analyzed."

There are three types of glia cells, each providing different kinds of support to neurons: oligodendrocytes insulate, microglia act as immune cells, and astrocytes help with neuron metabolism, detoxification, among many functions. Based on analysis of human brain tissue samples, the researchers show that astrocytes and oligodendrocytes shift their regional gene expression patterns upon aging, (e.g., which genes are turned on or off) particularly in the hippocampus and substantia nigra--important brain regions for memory and movement, respectively--while the expression of microglia-specific genes increases in all brain regions.

The investigators next took a preliminary look at whether these changes in gene expression could relate to changes in brain cell populations. Based on a comparison of tissue samples from 3 young and 3 old brains, they found that the number of oligodendrocytes decreases with age in the frontal cortex. They further established that this likely corresponds with decreased expression of oligodendrocyte specific genes. Other types of cells had more complicated patterns of change.

"We developed a very nice machine learning program and had to go through hundreds of thousands of oligodendrocytes and neurons to get reliable data, but we wanted to understand whether decreased expression causes changes at the molecular or cellular-level," author says. "We did see oligodendrocytes disappearing but with neurons we didn't see dramatic changes in cellular numbers except for a decrease in the largest neurons. This is of interest because those largest neurons are generally connected to neurodegenerative diseases."

One unexpected finding was that certain glial gene expression patterns could predict age in the general population. While this can only be done postmortem, and certain people will not fit neatly into these patterns, it does provide scientists one more tool to understand how aging in the brain may be linked to the causes of age-related disorders. The researchers' ultimate goal is to see whether gene mutations or other variables could affect gene expression in ways that cause disease.

The relationship between sugar and cancer revealed!

Breast cancer cells recycle their own ammonia waste as fuel One to 10 mutations are needed to drive cancer