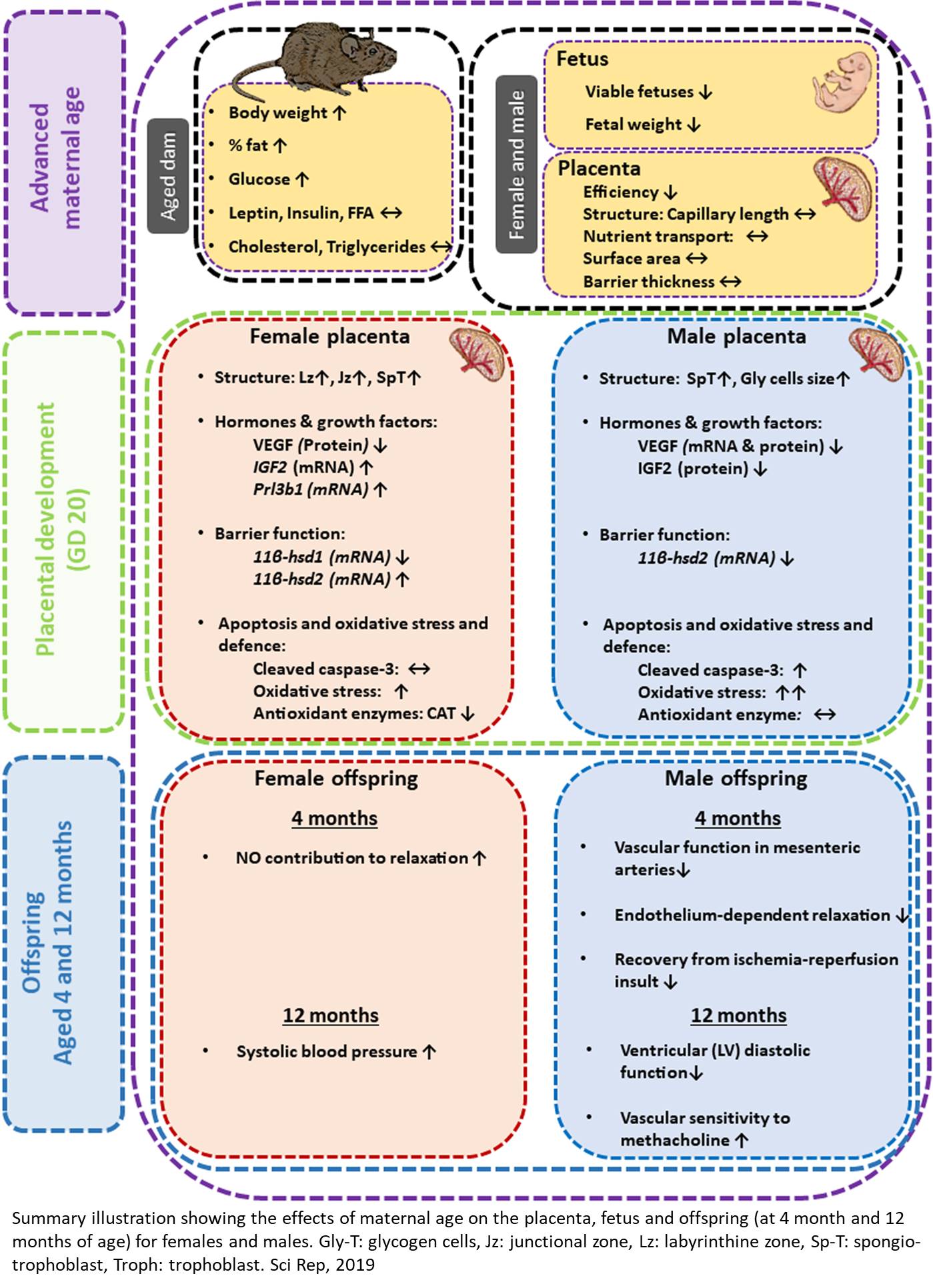 Changes occur in the placenta in older pregnant mothers leading to a greater likelihood of poor health in their male offspring, a study in rats has shown. Both male and female fetuses do not grow as large in older mothers, but there are sex-specific differences in changes to placental development and function. These are likely to play a central role in the increased likelihood of later-life heart problems and high blood pressure in males.

"This new understanding of placental development and function could contribute to better management of human pregnancies, and development of targeted interventions to improve the longer-term health of children born to older mothers," said the first author of the study.

Pregnancy in older mothers is associated with a heightened risk of complications for both the mother and her baby. These include preeclampsia - raised blood pressure in the mother during pregnancy, gestational diabetes, stillbirth and fetal growth restriction. Until now there has been limited understanding of how the placenta is altered by advanced maternal age.

"With the average age of first pregnancy in women becoming higher and higher, and especially so in developed countries, it is very important to understand how the age of the mother and the sex of the baby interact to determine pregnancy and later-life health of the child," said the lead author of the study.

The placenta transports nutrients and oxygen from mother to fetus, secretes signalling factors into the mother so she supports fetal development, and is the main protective barrier for the fetus against toxins, bacteria, and hormones - such as stress hormones - in the mother's blood. It is highly dynamic in nature, and its function can change to help protect the growing fetus when conditions become less favourable for its development, for example through a lack of nutrients or oxygen or when the mother is stressed.

The researchers analysed the placentas of young (3-4 months old) and aged rats (9.5-10 months old) that were pregnant with male and female offspring. The aged rats correspond to approximately 35 year-old humans. Rats are a useful model as their biology and physiology have a number of important characteristics in common with those of humans.

The study found that advanced maternal age reduced the efficiency of the placenta of both male and female fetuses. It affected the structure and function of the placenta more markedly for male fetuses, reducing its ability to support growth of the fetus.

"A pregnancy at an older age is a costly proposition for the mother, whose body has to decide how nutrients are shared with the fetus. That's why, overall, fetuses do not grow sufficiently during pregnancy when the mother is older compared to when she is young," said the lead. "We now know that growth, as well as gene expression in the placenta is affected in older mothers in a manner that partially depends on sex: changes in the placentas of male fetuses are generally detrimental."

An earlier study performed by the collaborators showed that offspring from mothers who enter pregnancy at an older age have poor heart function and high blood pressure as young adults, and particularly so if they are male. This new research was conducted to understand why, and whether this sex difference may be due to how the male and female fetuses are supported within the womb in an aged mother.

Although further studies in humans are required, the results suggest the importance of considering the sex of the fetus when giving advice to older pregnant women. The researchers also hope to build on these results and find ways of improving the function of the placenta to optimise growth of the fetus.