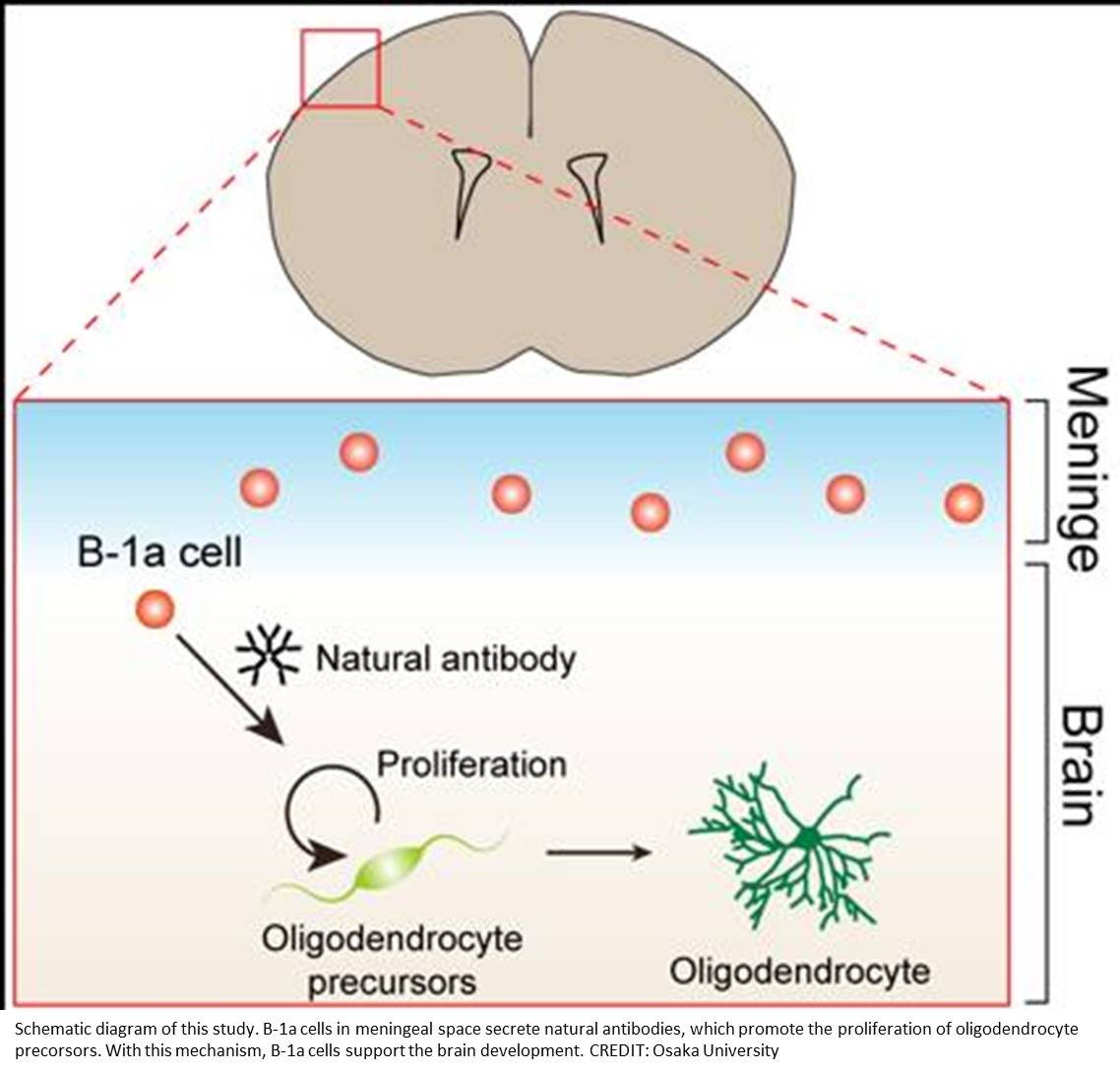 Neurons are specialized cells of the nervous system that communicate using electrical signals, which propagate down long, wire-like projections called axons. The conduction of these signals requires myelin, a fatty substance that surrounds axons in much the same way that plastic coating surrounds an electrical wire.

Several neurological disorders, including autism and schizophrenia, are thought to be driven in part by the failure of myelin to properly surround axons during development. In a study published in Nature Neuroscience, researchers have added an unexpected piece to the developmental puzzle, showing that immune cells may play a key role in helping myelin to form around newly minted neurons.

T and B cells are vital players in the immune system; their job is to circulate through the body, find infectious agents, and mount a protective response. These cells spend most of their time traversing the bloodstream and the lymph nodes-but are thought to be blocked from accessing the brain.

"The central nervous system is protected from pathogens by a highly selective barrier that keeps the circulatory system physically separated from the brain," lead author explains. "It's generally believed that this barrier also excludes immune cells from the brain. Our study suggests otherwise, though, as we found that a certain type of B cell is quite abundant in the ventricles, meninges, and choroid plexus in the brains of young mice. Even more surprising, these cells appear to stimulate axon myelination in the surrounding neurons."

Neurons are unable to produce their own myelin. Instead, supportive cells called oligodendrocytes are responsible for making the myelin sheath that wraps around axons. The team discovered that the B immune cells, called B-1a cells, ensure that enough of these oligodendrocytes are available in the developing brain to support adequate myelination.

"We experimentally depleted B cells from the brains of young mice and saw oligodendrocyte numbers drop significantly," lead author adds. "It turns out that so-called natural antibodies secreted by B-1a cells induce oligodendrocyte precurosors to proliferate. These antibodies are typically involved in immune surveillance, but in this case they promote the myelination of axons."

Recent studies have shown that T cells can occupy the meninges and play a role in learning and memory. However, this is the first study implicating B cells in myelin production during early development. The study may have broad implications for diseases driven by early defects in neuronal growth.

"Prior work has indirectly hinted at a role for B cells in neurodevelopmental disorders," lead investigator notes. "Our findings provide direct evidence that B cells reside in the mouse neonatal brain and promote both oligodendrocyte proliferation and neuron myelination. This suggests to us that B cell dysfunction in early development may contribute to later mental disorders, a possibility that we believe deserves further exploration in future studies." Fat in feces points to early presence of colorectal cancer