Jawless fish brains more similar to ours than previously thought 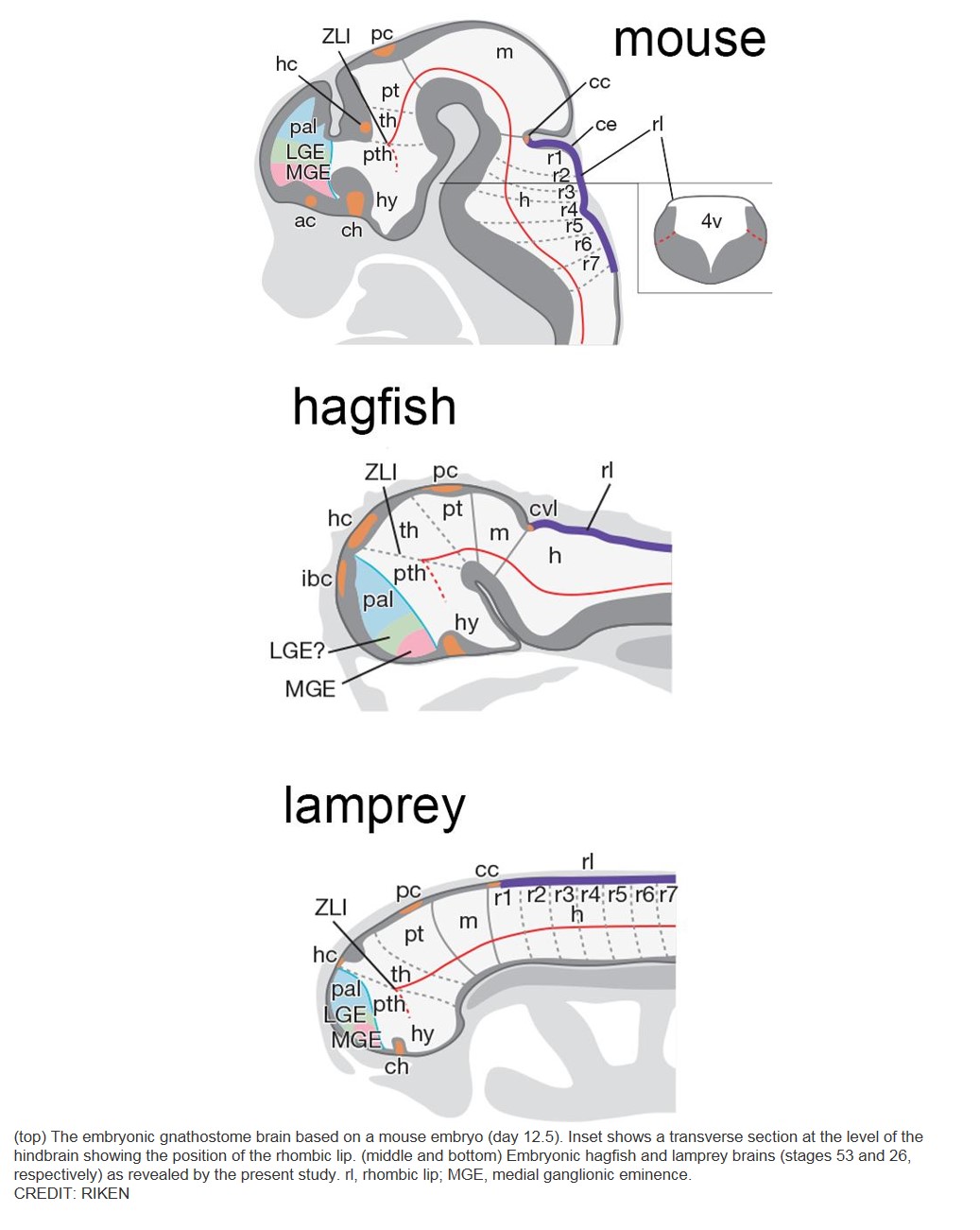 Researchers have shown that complex divisions in the vertebrate brain first appeared before the evolution of jaws, more than 500 million years ago. Published in Nature, the study shows that two elements of brain genoarchitecture thought to be unique to jawed vertebrates are actually present in two jawless fish--the hagfish and lamprey.

Most living vertebrate species have jaws, a development thought to have occurred sometime in the Paleozoic era. Jawed vertebrates--including humans--share many developmental characteristics that have remained unchanged for millennia. The brain's basic developmental plan was thought by many scientists to have reached completion in jawed vertebrates because the brains of lampreys and hagfish--the only jawless fish that remain alive today--seem to lack two key domains.

The vertebrate brain develops from a neural tube that is divided into sections. The development of each section is very specific, and is controlled by the expression of particular genes at very precise times and locations. These gene-expression patterns--or the genoarchitecture--are highly conserved in jawed vertebrates. Lampreys--a type of jawless fish--appear to lack two brain regions common to jawed vertebrates--the cerebellum and a region called the medial ganglionic eminence, or MGE, from which the pallidum and cortical interneurons originate.

"The problem was that lampreys had not yet been shown to have a similar patterning," explains the author. "The shared pattern of brain development between hagfish and jawed vertebrates raised the possibility that the apparently primitive brain of the lamprey is simply a lamprey-unique characteristic."

Additionally, without an answer to the lamprey question, these shared patterns could be interpreted as changes that independently occurred in each lineage--jawed and jawless--after they split from each other.

To address the issue, the team reinvestigated the lamprey, and discovered several new Nkx2.1 genes expressed in the correct location, but did not find any Hedgehog expression, indicating that the lamprey MGE is slightly different from that found in jawed vertebrates. Then the team looked at lamprey larvae and found a rhombic-lip like region that expresses Pax6B, albeit slightly differently than in hagfish or jawed vertebrates.

"We found that jawed-vertebrate patterning was more similar to the hagfish than to lampreys," says the author, "and the evidence indicates that this is likely due to secondary evolutionary changes in lamprey evolution, rather than changes unique to jawed vertebrates."

"With these new findings from hagfish and lampreys, we have shown that both of the extant jawless-fish species have a rhombic lip and an MGE --the sources of the cerebellum, pallidum, and GABAergic interneurons in jawed vertebrates. This firmly places the development of these genoarchitectural patterns back to a common ancestor shared by jawless and jawed vertebrates."