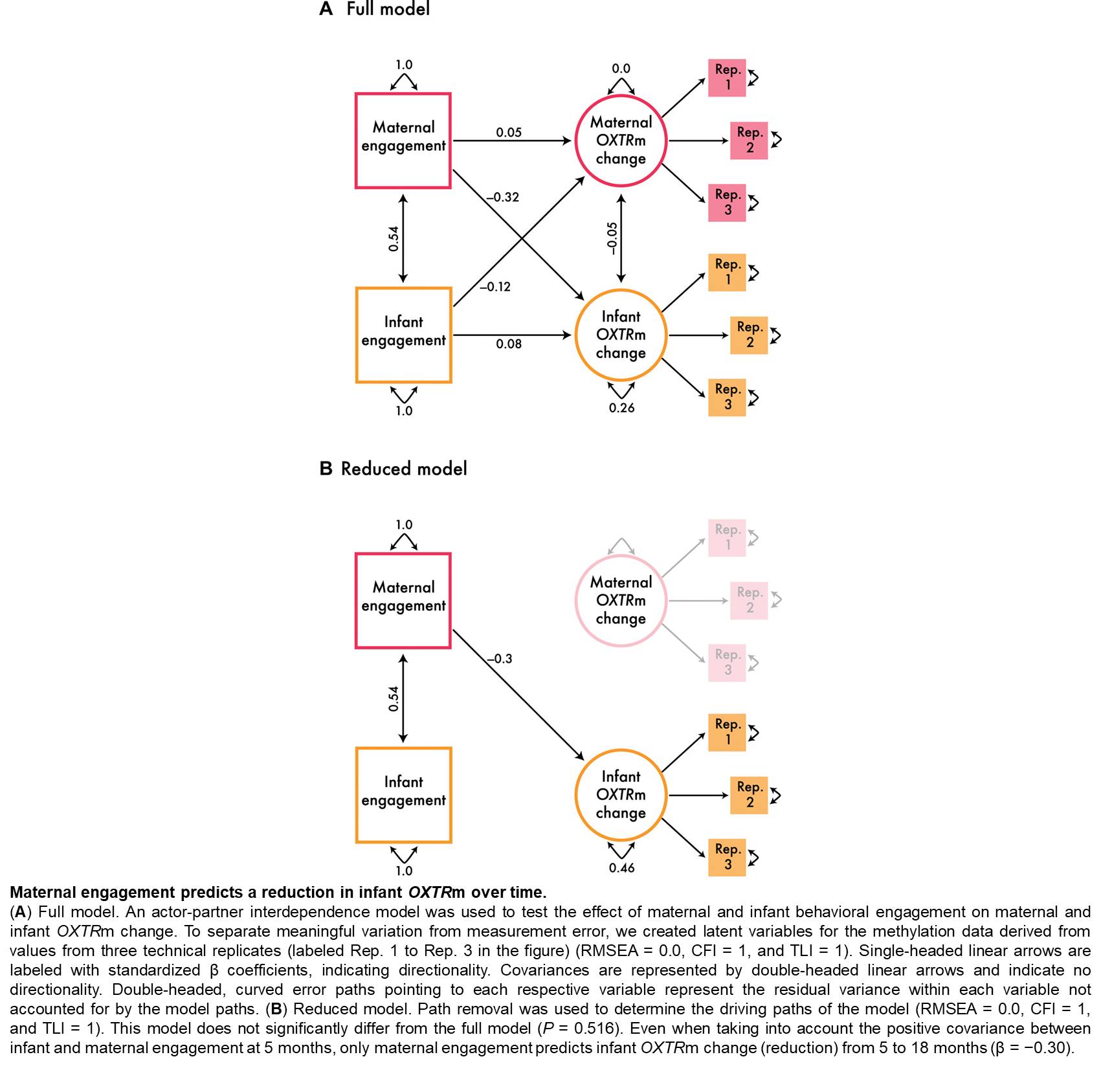 Oxytocin is an extremely important hormone, involved in social interaction and bonding in mammals, including humans. It helps us relate to others. It strengthens trust, closeness in relationships, and can be triggered by eye contact, empathy, or pleasant touch. It's well known that a new mother's oxytocin levels can influence her behavior and as a result, the bond she makes with her baby.

A new epigenetic study now suggests that mothers' behavior can also have a substantial impact on their children's developing oxytocin systems.

Childhood marks a dynamic and malleable phase of postnatal development. Many bodily systems are coming online, maturing, or getting tweaked, often setting our psychological and behavioral trajectories well into adulthood. Nature plays an obvious role, shaping us through our genes. But we are also heavily influenced by our interactions, with other people and with our environment. "It is well known that oxytocin is actively involved in early social, perceptual, and cognitive processes, and, that it influences complex social behaviors," says the author. "However, in this study we ask whether the mother's behavior might also have a decisive influence on the development of the baby's oxytocin system itself. Advances in molecular biology, epigenetics in particular, have recently made it possible to investigate the interaction of nature and nurture, in this case infant care, in fine detail. That is exactly what we've done here".

The scientists observed a free play interaction between mothers and their five-month-old children. "We collected saliva samples from both the mother and the infant during the visit and then a year later, when the child was 18 months old. We were interested in exploring whether the involvement of the mother, in the original play session, would have an influence on the oxytocin receptor gene of the child, a year later. The oxytocin receptor is essential for the hormone oxytocin to exert its effects and the gene can determine how many are produced," explains the grad student..

"We found that epigenetic changes had occurred in infant's DNA, and that this change was predicted by the quality of the mother's involvement in the play session. If mothers were particularly involved in the game with their children, there was a greater reduction in DNA methylation of the oxytocin receptor gene one year later. Decreased DNA methylation in this region has previously been associated with increased expression of the oxytocin receptor gene. Thus, greater maternal involvement seems to have the potential to upregulate the oxytocin system in human offspring," explains the scientist. "Importantly, we also found that the DNA methylation levels reflected infant temperament, which was reported to us by the parents. The children with higher methylation levels at 18-months, and presumably lower levels of oxytocin receptor, were also more temperamental and less well balanced."

The results of this study provide a striking example of how we are not simply bound by our genes but are rather the products of a delicate interplay between our blue prints and experiences. Early social interaction with our caregivers, certainly not excluding fathers, can influence our biological and psychological development through epigenetic changes to the oxytocin system. These and related findings highlight the importance of parenting in promoting cross-generational health.'