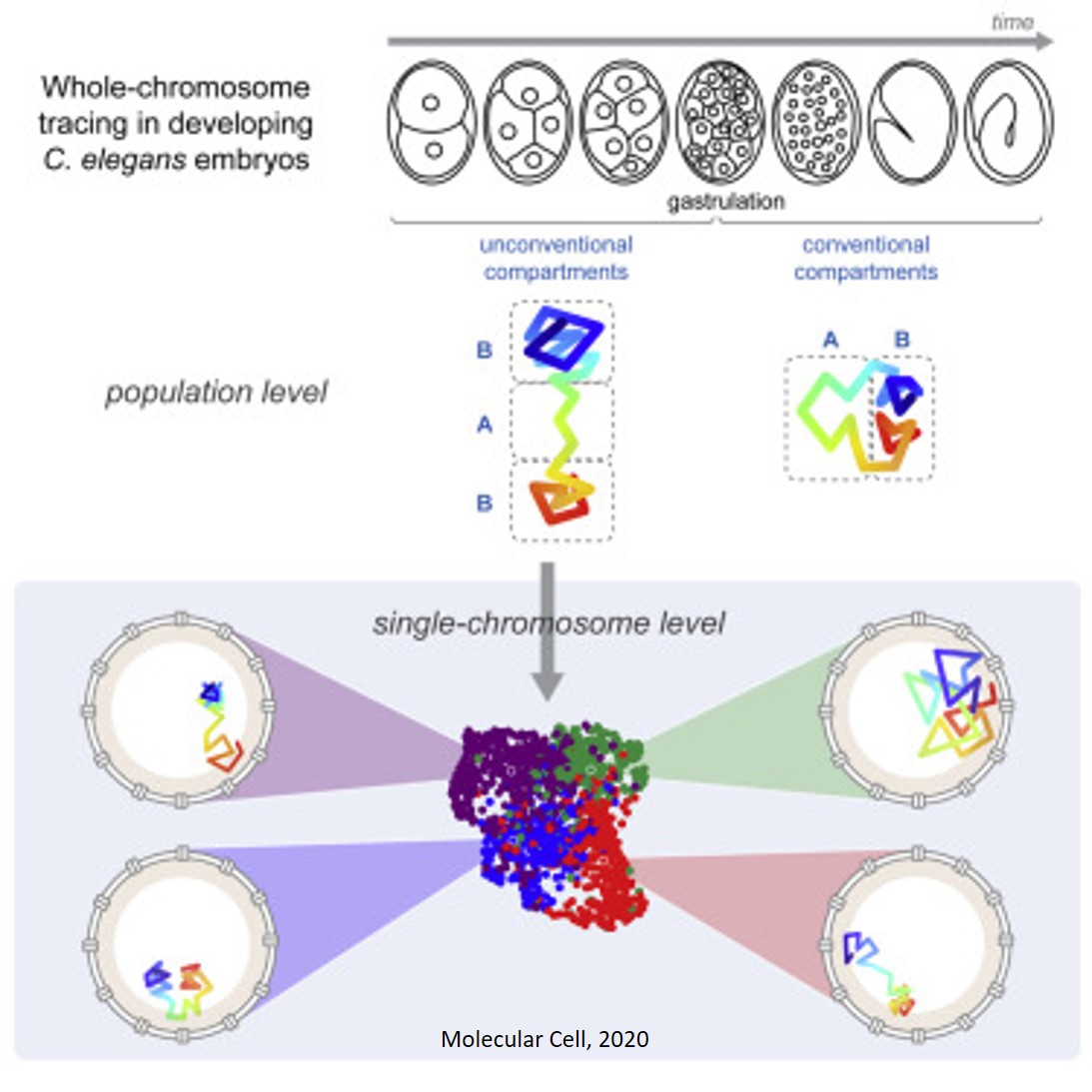 The spatial arrangement of genetic material within the cell nucleus plays an important role in the development of an organism. A research team has developed a method to trace the chromosomes in individual cells. Using this method, they have now been able to demonstrate that chromosomes reorganize during embryonic development. The study has been published in Molecular Cell.

Our body is made up of a wide variety of cells with the most diverse functions. Irrespective of being heart, liver or nerve cells, however, they all contain the same genetic information. The reason why cells develop differently is that only parts of their chromosomes are read. This results in some genes being active while others, in contrast, are silent.

For gene activation, both the way the genes are packaged as well as their spatial organization in the cell nucleus play a decisive role. The team has now investigated this 3D architecture more closely. Using a novel technique, they were able to trace individual chromosomes during embryonic development in nematodes and show that they rearrange themselves during the early phase.

If stretched out, all the DNA molecules of a cell would reach about two meters in length. So the DNA must be densely packed to fit into a cell nucleus of only few micrometers in size. The DNA strands are very tightly coiled and twisted to form space-saving structures, called chromosomes. The packaging and the arrangement of the DNA of the chromosomes determines the activity of genes.

In their study, the researchers traced individual chromosomes and investigated their organization during early embryonic development. Embryonic cells of the nematode C. elegans served as a model. "Using a novel technique, we were able to follow the spatial rearrangement of chromosomes in single cells at the beginning of embryogenesis," says the senior author. "The advantage of this method is that the cells and tissue remain completely intact."

It is well known that chromosome regions with similar functional properties contact each other and interact. This means that chromosome domains segregated into two compartments, active and inactive. "During early embryogenesis, however, the chromosomes are organized differently," says the first author of the study. "In the early embryo, they are organized into an unconventional barbell-like structure, with inactive compartments separated by a central active region." The researchers discovered that the nuclear lamina - a protein mesh lining the inner surface of the cell nucleus - is required to achieve this barbell arrangement. The lamina is attached to the inactive sections and stretches the chromosome.

"Only at a later stage of embryonic development, when the germ layers develop, we actually see the well-known segregation into an active and inactive region," explains the senior author. "Using chromosome tracing, we were able to map the whole 3D chromosome architecture and could show for the first time that chromosomes rearrange during early development, a maturation process that requires the nuclear lamina."

The reorganization of the chromosomes accompanies cell maturation and represents a milestone in the development of a complex organism. The correct chromosomal architecture is crucial to prevent developmental disorders.