Brain tangles in an animal model through exposure to environmental toxin 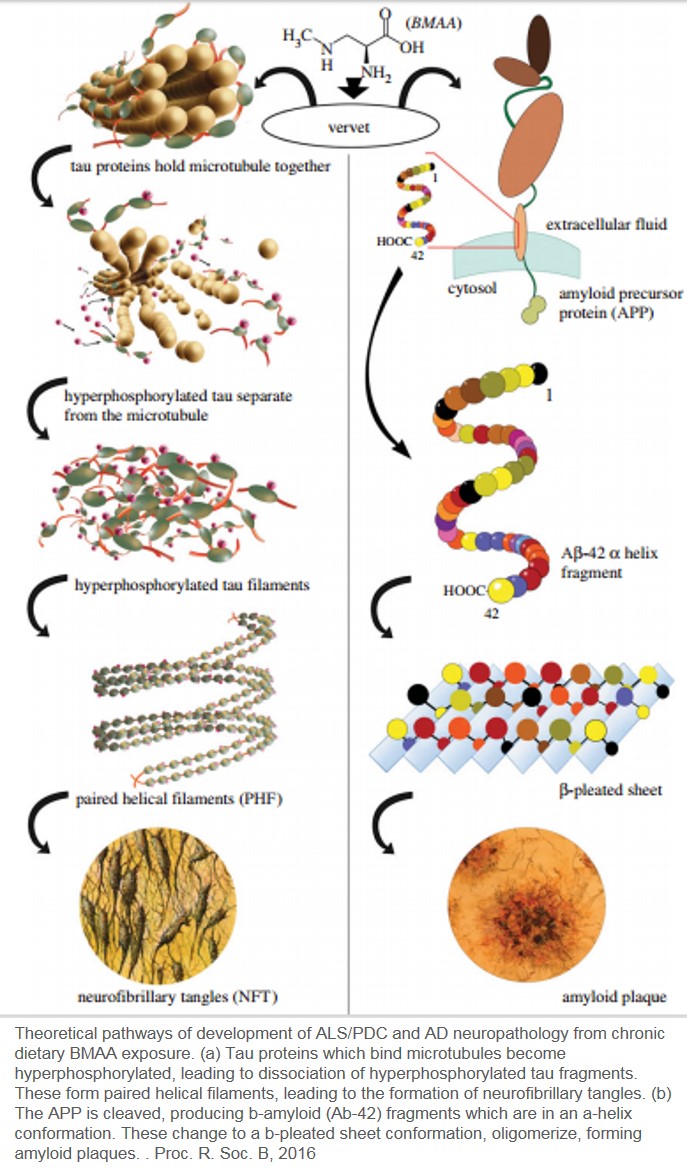 A new study published in the journal Proceedings of the Royal Society B indicates that chronic exposure to an environmental toxin may increase risk of neurodegenerative illness. The study provides a foundation for future research in Alzheimer's disease, ALS and Parkinson's disease.

Brain tangles and amyloid deposits are the hallmarks of both Alzheimer's disease and an unusual illness suffered by Chamorro villagers on the Pacific Island of Guam, whose diet is contaminated by the environmental toxin BMAA. Pacific Islanders with this unusual condition also suffer from dementia and symptoms similar to Alzheimer's disease, ALS and Parkinson's disease.

The cause of neurodegenerative disease remains largely unknown, and the role of environmental factors in these illnesses is poorly understood. However, scientists have suspected a link between BMAA, a neurotoxin found in some harmful algal blooms, and neurodegenerative illness.

This is the first time researchers have been able to successfully produce brain tangles and amyloid deposits in an animal model through exposure to an environmental toxin.

Researchers conducted two experiments on vervets that lasted for 140 days. In the first experiment, vervets fed fruit dosed with BMAA developed neurofibrillary tangles and amyloid deposits similar to Pacific Islanders who died from the disease. Vervets fed equal amounts of L-BMAA and the dietary amino acid L-serine had a reduced density of tangles. Vervets fed a placebo dose did not develop neuropathology.

After 140 days, tangles and amyloid deposits were found in the brain tissues of all of the vervets who consumed BMAA. However, there was a significant reduction in the density of tangles in those that consumed equal amounts of L-serine.

Authors do not advocate patients taking L-serine at this time. "The FDA has not approved its use for the treatment of neurodegenerative illness, and much more research is needed. However, this new animal model may prove useful in evaluating other potential new Alzheimer's drugs."