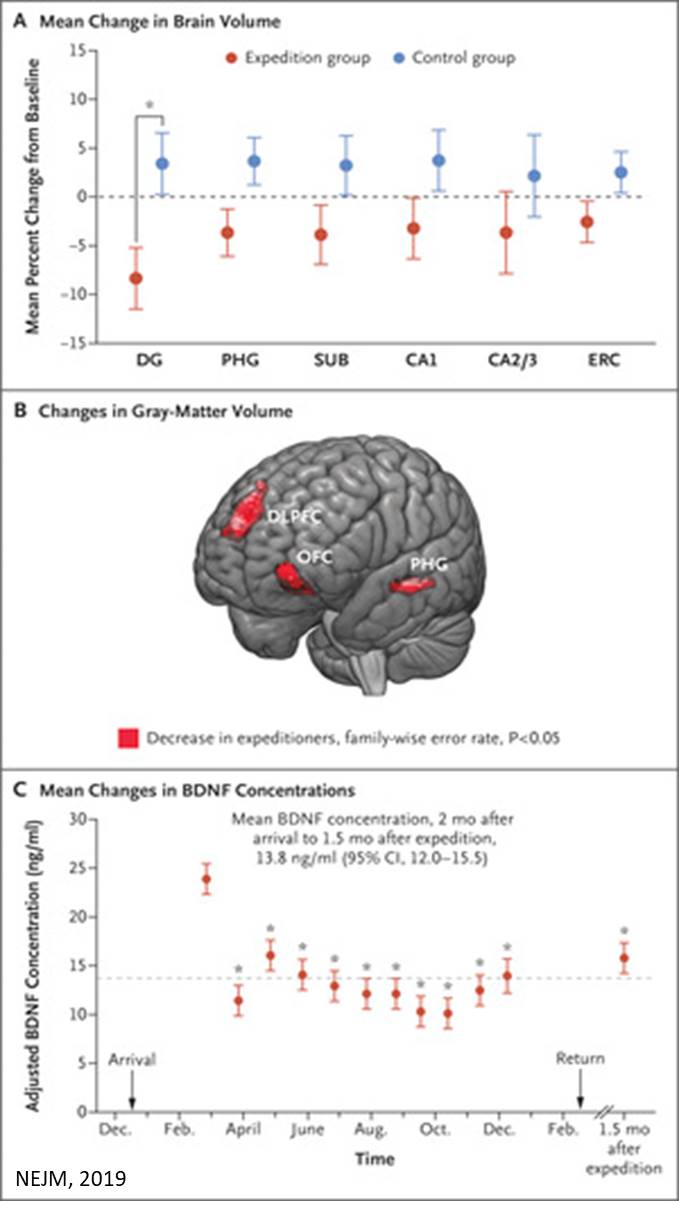 Members of a polar research expedition have provided researchers with an opportunity to study the effects of social isolation and extreme environmental conditions on the human brain. The researchers found changes to the dentate gyrus, an area of the hippocampus responsible for spatial thinking and memory. Results from their study have been published in the New England Journal of Medicine.

Setting off on an Antarctic expedition to Neumayer-Station III, a German Antarctic research station run by the Alfred Wegener Institute, Helmholtz Centre for Polar and Marine Research (AWI), means having to face temperatures as low as -50 degrees Celsius (-58 degrees Fahrenheit) and almost complete darkness during the winter months. Life at the research station offers little in the way of privacy or personal space. Contact with the outside world is minimal, and cutting one's stay short is not an option - at least not during the long winter months. Emergency evacuation and deliveries of food and equipment are only possible during the relatively short summer.

"This scenario offers us the opportunity to study the ways in which exposure to extreme conditions affect the human brain," says study lead. The researchers set out to determine whether or not an Antarctic expedition produces changes to the structure and function of the human brain.

Five men and four women volunteered to participate in the study. They spent a total of 14 months at the Antarctic research station, nine of which were spent in isolation from the outside world. Before, during and after their mission, the participants completed a set of computer-based cognitive tests. These included evaluations of concentration, memory, cognitive reaction time and spatial thinking. Regular blood tests were carried out to measure levels of a specific growth factor known as brain-derived neurotrophic factor (BDNF), a protein responsible for promoting the growth of nerve cells and synapses in the brain.

The researchers used magnetic resonance imaging to determine brain structure in each of the participants before and after their mission. They did so in order to record changes in brain volume, paying particular attention to the hippocampus, a structure located deep inside the brain. "For this, we used a high-resolution methodology which makes it possible to take precise measurements of individual areas of the hippocampus," says the senior author. A group of nine control participants underwent identical tests.

Measurements taken after the end of the exhibition revealed that the dentate gyrus, an area of the hippocampus with an important role in spatial thinking and memory formation, was smaller in members of the expedition team than in controls. These changes were also associated with a decrease in BDNF levels. After only three months in the Antarctic, levels of the growth factor had decreased to levels below those recorded prior to the start of the expedition and had not returned to normal one-and-a-half months after the expedition.

Cognition tests showed effects on both spatial abilities and the so-called selective attention, which is necessary to ignore irrelevant information. Repeated testing is normally associated with improvements in test results. This learning effect, however, was reduced in participants whose dentate gyrus had decreased in volume, the reduction proportional to the extent of the volume lost.

"Given the small number of participants, the results of our study should be viewed with caution," explains another author, adding: "They do, however, provide important information, namely - and this is supported by initial findings in mice - that extreme environmental conditions can have an adverse effect on the brain and, in particular, the production of new nerve cells in the hippocampal dentate gyrus." As a next step, the researchers plan to study whether or not physical exercise might be able to counteract the observed changes in the brain.