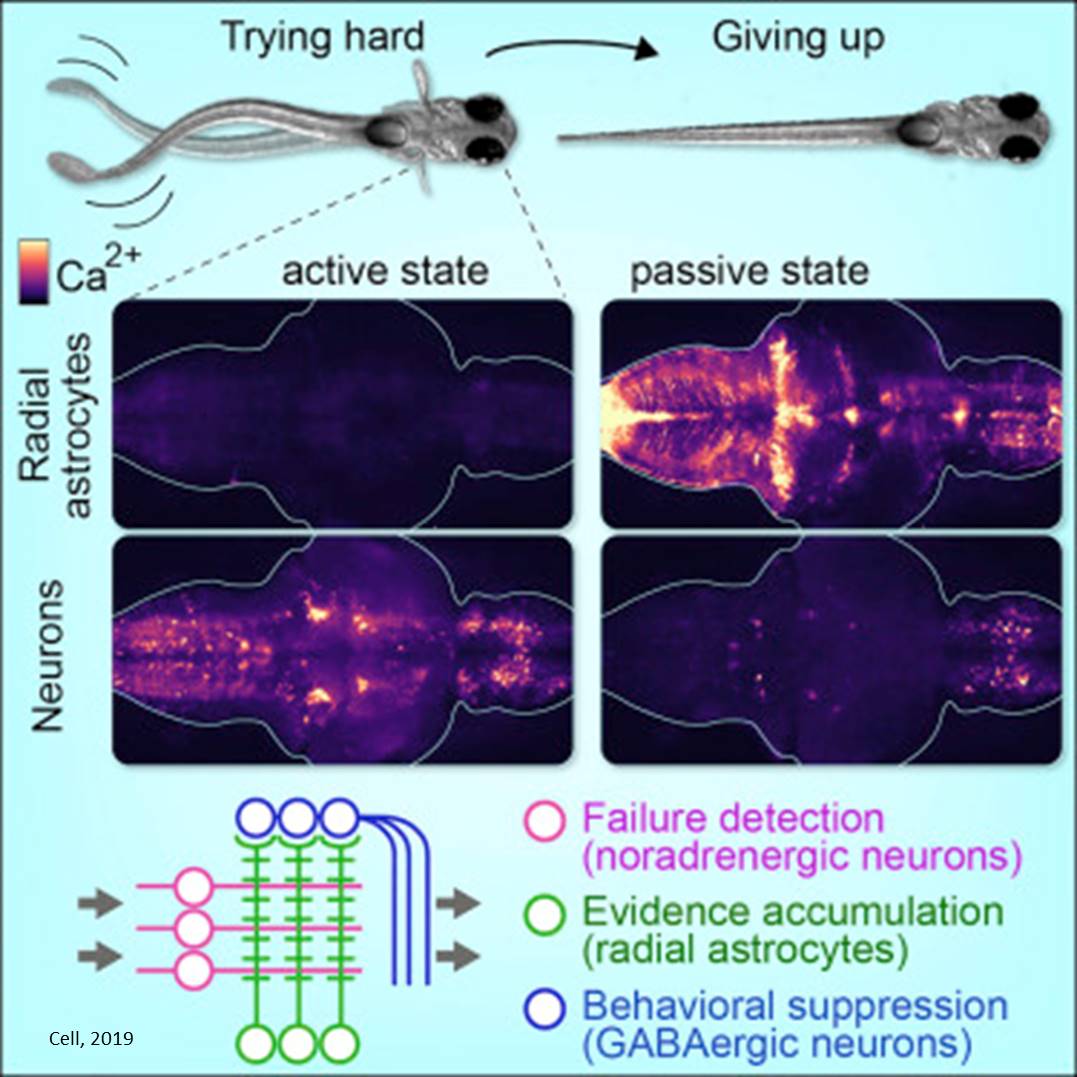 Secured in place in a virtual-reality-equipped chamber, frustrated zebrafish just didn't want to swim anymore. They had been "swimming" along fine, until the virtual reality system removed visual feedback associated with movement. To the fish, it appeared as if they were drifting backward, regardless of how hard they stroked.

First, the fish thrashed harder. Then, they simply gave up, says the neuroscientist. "Giving up is a very important thing for animals to be able to do," the author says. Without the ability to stop a behavior that's not working, animals would needlessly deplete their energy.

The team wanted to identify the neurons responsible for the decision to quit. The researchers watched the zebrafish's brain activity patterns as they struggled. But the clearest signal wasn't coming from neurons. The cells that sprang into action just before the zebrafish called it quits were actually glia, long thought to play a supporting role in the brain.

The find, reported, in the journal Cell, is clear evidence that cells other than neurons can perform computations that influence behavior - a discovery so surprising that the team took pains to verify their work, the author says.

Until about two decades ago, scientists thought glia (from the Greek for "glue") just provided support and insulation for neurons. But recent research has begun to uncover new roles for glia in processing. Now, the researchers have shown that, in zebrafish, one type of glial cell can calculate when an effort is futile.

"The original hope was that we would find the neurons that drive this 'giving-up' behavior," the author says.

A whole-brain imaging technique previously developed at Janelia let the researchers look at all of a fish's brain cells, both neurons and glia, while it tried to swim. Then, the team compared the different cells' impact on behavior.

But surprisingly, the team had trouble identifying specific neurons that clearly impacted swimming behavior. Glia were a different story, the author says. Certain glia, called radial astrocytes, amped up their activity in one part of the brain when the animals stopped trying to swim.

Neurons weren't completely out of the loop: each time a movement attempt failed, certain neurons revved the astrocytes up, until at last they crossed a threshold and sent the quit command. That command went out to a different set of neurons, which then suppressed swimming.

"You could think of the astrocytes as a counter for how many swim bouts have failed," says the author. It's not a simple job: To tell the fish when to give up, the glia must monitor movement attempts, note repeated failures, and then send the "quit" message to the body.

To verify the astrocytes' role, the researchers first used a laser to kill only the ones that consistently turned on when the fish gave up. In fact, the team found, fish who lacked those cells continued struggling to swim much longer than the fish whose astrocytes remained.

One next step for the group will be studying exactly how the astrocytes communicate with neurons. Astrocytes can, for example, release chemical messengers that affect neuron behavior, the author says. "Astrocytes are like a swiss army knife." The authors  want to identify which of their many tools they deploy to halt unproductive struggle.