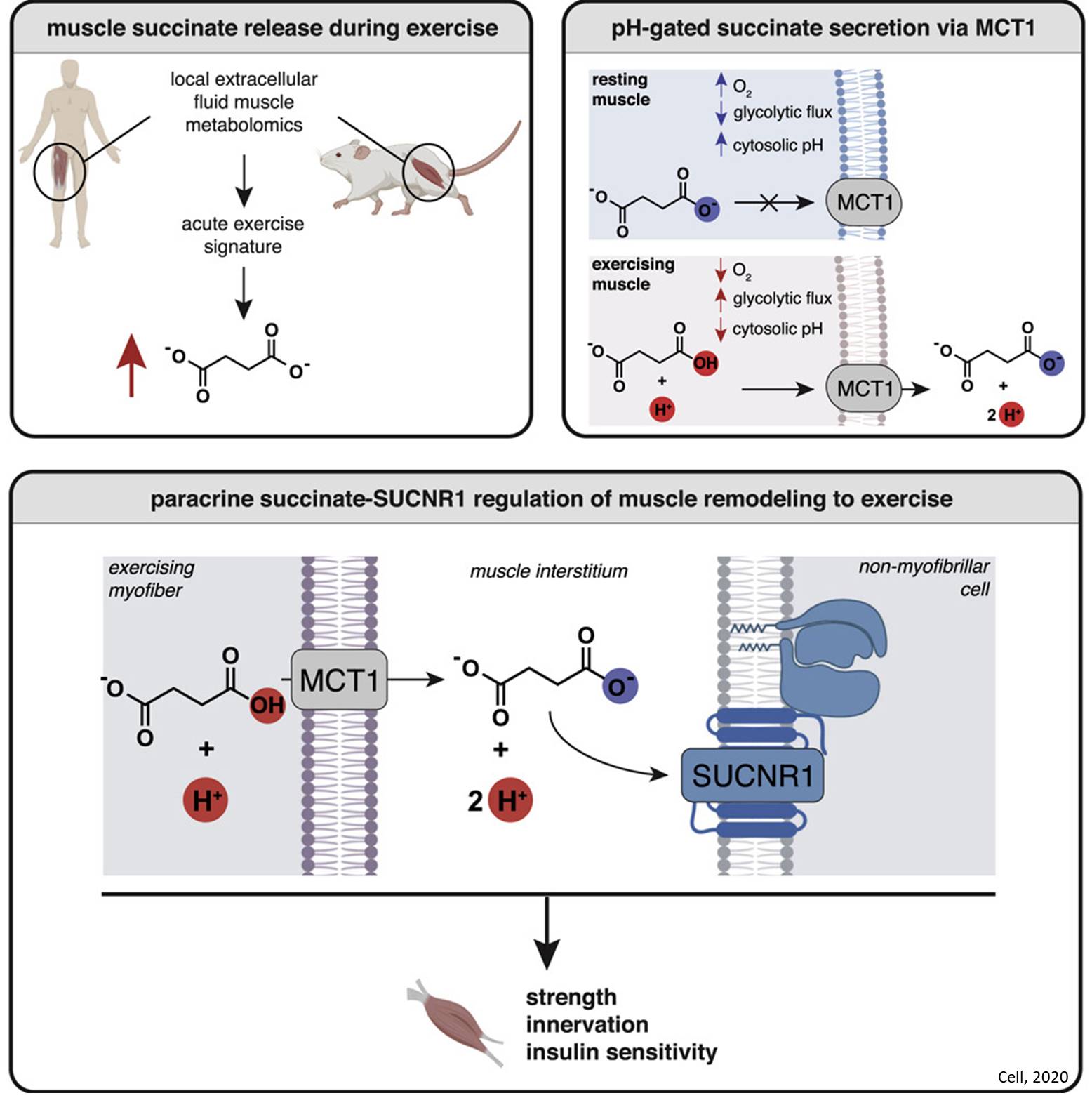 The onset of any physical exercise program causes muscle pain that can hinder movements as simple as getting up from a sofa. With time and a little persistence, the muscles become accustomed to the effort, developing more strength and endurance. Researchers describe the cellular mediator that makes this adaptation to exercise possible in the journal Cell. The mediator is succinate, a metabolite hitherto known only for its participation in mitochondrial respiration.

"Our results show that succinate leaves muscle cells during exercise and sends their neighbors signals that induce a process of muscle tissue remodeling," the author explained. "The motor neurons create new ramifications, the muscle fibers become more uniform to gain strength on contracting, and blood sugar uptake increases in all cells to produce ATP [adenosine triphosphate, the cellular fuel]. There's an increase in efficiency."

The findings reported in the article are based on a large number of experiments with animals and human volunteers. The first entailed comparisons of more than 500 metabolites present in mouse leg muscles before and after the mice ran on a treadmill until they were exhausted.

"Besides muscle fibers, muscle tissue also contains immune, nerve, and endothelial cells. If each one was a house, the streets between houses would be the interstitium or interstitial space. We isolated and analyzed each of the houses as well as the streets to find out what changes in the neighborhood after exercise, and observed a significant increase in succinate only in muscle fibers and interstitial spaces," the author said.

A similar phenomenon was observed in healthy volunteers aged 25-35 during 60 minutes of intense exercise on a stationary bicycle. In this case, the researchers analyzed blood samples obtained via catheters in the femoral artery and vein and found that succinate levels rose substantially in venous blood exiting the muscle and fell rapidly during recovery.

At this point, the researchers were convinced that muscle cells released succinate in response to the stress caused by exercise, but they wanted to find out how, and above all why. Analysis of the volunteers' blood offered a clue: another compound that increased with exercise, in both venous and arterial blood, was lactate (the ionized form of lactic acid), a sign that the cells had activated their emergency energy generation system.

"Succinate is a metabolite that is normally unable to cross the cell membrane and leave the cell. Inside the cell, it participates in the Krebs cycle, a series of chemical reactions that occur in the mitochondria and result in ATP formation," another author explained. "But when energy demand increases sharply and the mitochondria can't keep up, an anaerobic system is activated, causing excess lactate formation and cell acidification. We found that this change in pH causes a change in the chemical structure of succinate such that it's able to get through the membrane and escape into the extracellular medium."

The transport protein that helps succinate exit the cell was identified by proteomics, an analysis of all the proteins in the membranes of mouse and human muscle cells. The results showed an increase in MCT1 in muscle tissue after exercise. MCT1 is a protein that specializes in transporting monocarboxylate out of the cell.

"The kind of molecule MCT1 transports is similar to succinate when it undergoes chemical modification in an acid medium. It ceases to be dicarboxylate and becomes monocarboxylate. We performed several in vitro experiments to confirm that this was the mechanism induced by exercise," the author said.

One of the experiments consisted of submitting cultured muscle cells to hypoxia (oxygen deprivation) in order to activate the anaerobic energy production mechanism and produce lactate. This was seen to be sufficient to induce succinate release into the interstitial space.

Another experiment involved germ cells (oocytes) from frogs genetically modified to express human MCT1. The researchers found that the oocytes released succinate only when they were placed in an acid medium.

"By this stage, we knew acidity makes succinate undergo protonation, a chemical process that enables it to bind to MCT1 and pass through the membrane into the extracellular medium, but we had yet to discover the significance of this accumulation of succinate in the interstitial space during exercise," the author said.

The importance of communication between cells in the organism's adaptation to any kind of stress is well-established in the scientific literature. Signals are exchanged by means of molecules released into the interstitial space to bind to proteins in the membranes of nearby cells. Activation of these membrane receptors triggers processes that lead to structural and functional tissue modifications.

"Our hypothesis was that succinate performed this role of regulation in muscles, by binding to a protein called SUCNR1 [succinate receptor 1] that's highly expressed in the membranes of motor neurons, for example," the author said.

To test the theory, they conducted experiments with mice that had been genetically modified not to express SUCNR1. The mice were allowed to run freely on a resistance wheel for three weeks, considered long enough for morphological and functional changes to occur in muscle tissue.

"The muscle fibers were expected to become more uniform and stronger, but they didn't," the author said. "In addition, exercise didn't promote motor neuron ramification, which is crucial to enhance contraction efficiency. We also observed that cellular glucose uptake didn't increase and that insulin sensitivity was lower than in the wild mice that served as controls. In other words, exercise-induced remodeling didn't happen without the succinate receptor."

According to the author, the study is the first to show the paracrine action of succinate in muscle tissue, i.e. its role in cell-to-cell signaling to alert nearby cells that they must modify their internal processes to adapt to a "new normal".

"The next step is to find out whether this mechanism is disrupted in other diseases characterized by energy metabolism alterations and cell acidification, such as neurodegenerative diseases, in which astrocyte-neuron communication is critical to disease progression," the author said.