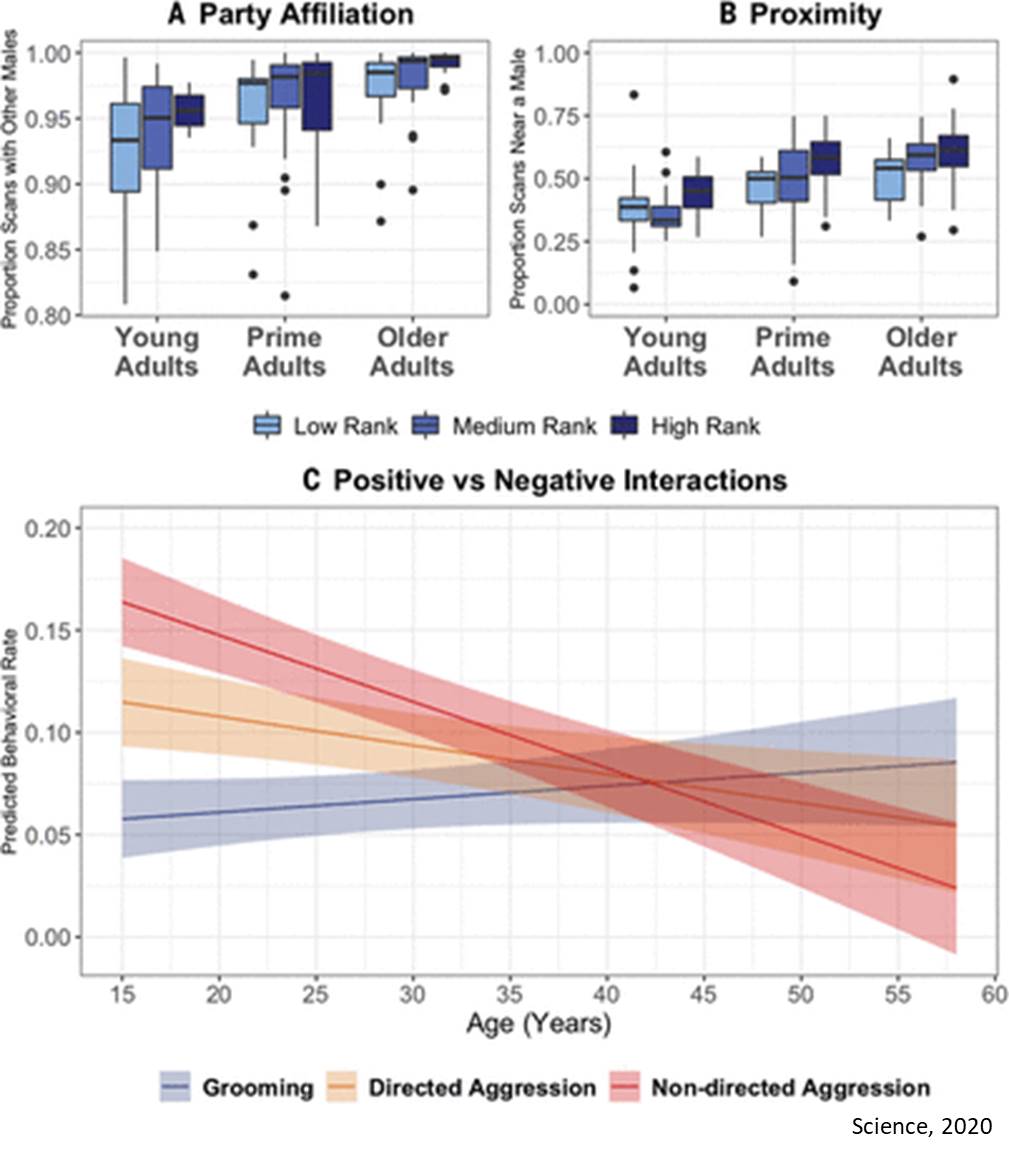 When humans age, they tend to favor small circles of meaningful, already established friendships rather than seek new ones. People are also more likely to lean toward positive relationships rather than ones that bring tension or conflict. These behaviors were thought to be unique to humans but it turns out chimpanzees, one of our closest living relatives, have these traits, too. Understanding who can help scientists gain a better picture of what healthy aging should look like and what triggers this social change.

The work is described in the journal Science and is authored by a team of psychologists and primatologists.

The study draws on 78,000 hours of observations, made between 1995 and 2016, which looked at the social interactions of 21 male chimpanzees between the ages of 15 and 58 years old in the Kibale National Park in Uganda. It shows what's believed to be the first evidence of nonhuman animals actively selecting who they socialize with during aging.

The researchers looked only at male chimpanzees because they show stronger social bonds and have more frequent social interactions than female chimps.

Analyzing a trove of data, the researchers saw that the chimpanzees displayed much of the same behavior aging humans exhibit. The older chimpanzees they studied, for instance, preferred spending more time with - and grooming - chimps they'd developed mutual friendships with over the years while younger chimps had more one-sided relationships where grooming wasn't always returned. Older males were also more likely to spend more time alone but interacted with more important social partners, like their aging mutual friends. And like older humans looking for some peace and quiet, the chimpanzees also showed a shift from negative interactions to more positive ones as they reached their twilight years. The preference is known as a positivity bias.

"The really cool thing is that we found that chimpanzees are showing these patterns that mirror those of humans," said one of the paper's lead authors.

Through future research that can help determine if these behaviors constitute the normal or successful course that aging should take, the author added. It can serve as a model or baseline.

"There's really a pressing need to understand the biology of aging," the author said. "More humans are living longer than in the past, which can change the dynamics of aging."

The study tested the origins of humans prioritizing close, positive relationships during aging and if it's really triggered by a theory known as socioemotional selectivity. The notion suggests that the central process driving social selectivity during aging results from people becoming aware that their time is running out and wanting to make the best of that time.

The findings from the study suggest there is more to understand.

"Even though chimps are very smart, they do not understand they're going to die," another author said. "Much more likely something else is going on in chimps to explain why their relationships become more positive as they get older, and then the question is what applies to chimps the same as what applies to humans."

The scientists weren't entirely surprised by their findings. Part of it is because chimpanzees and humans are already a lot alike in terms of social organization and social choices. After all, chimpanzees, along with bonobos, share 99 percent of their DNA with humans.

"It raises the possibility that we are seeing behavioral systems that have been shared evolutionarily back to our common ancestor, around seven or eight million years ago," the author said.