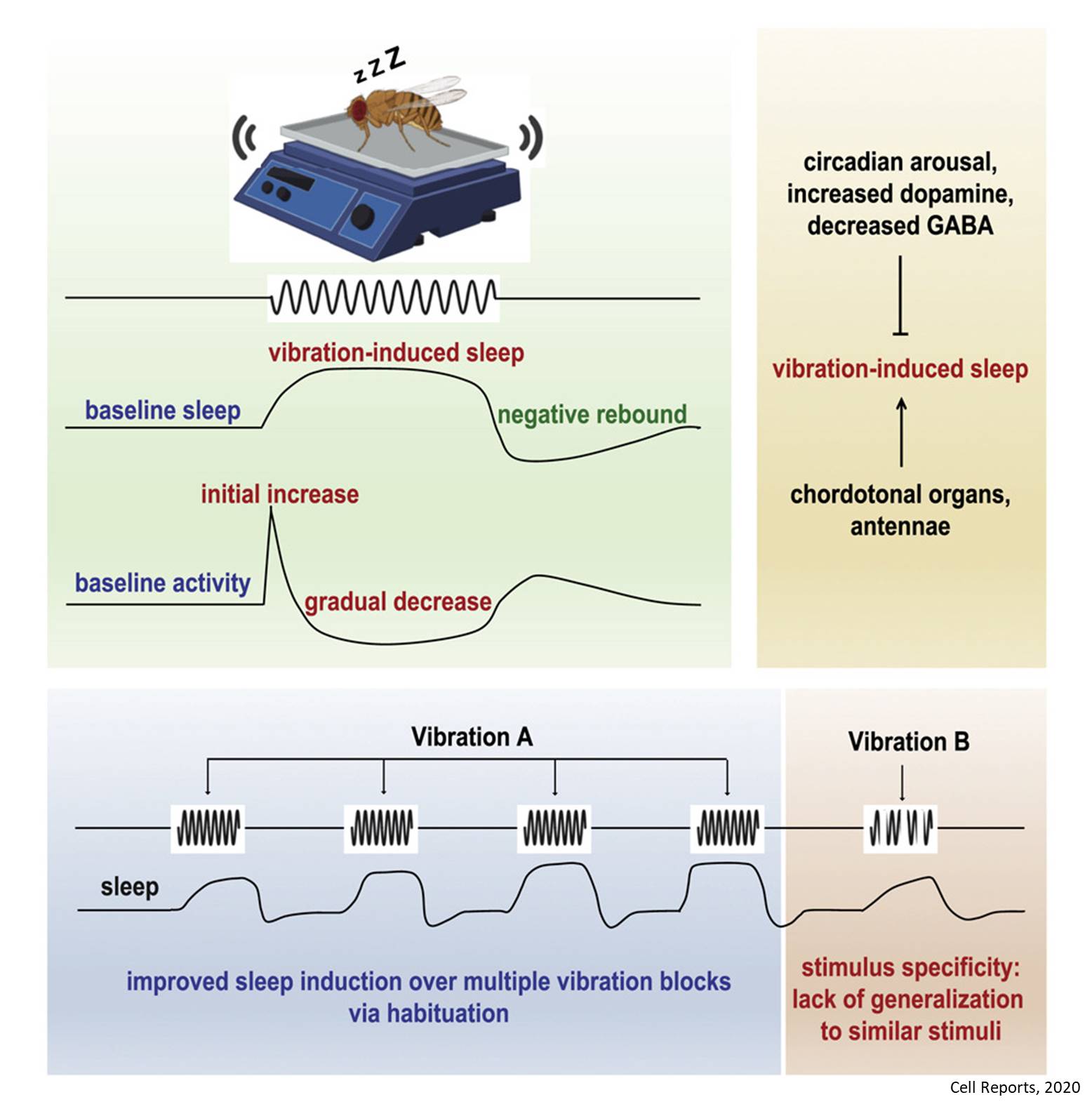 It is common practice to rock babies to sleep. Children and grownups also get drowsy during long car rides. There is something about gentle mechanical stimuli that makes humans of all ages sleepy. Sleep in fruit flies is very much like human sleep, and you can learn a lot about human sleep by studying how fly sleep is regulated. In research published in Cell Reports,  researchers report that flies fall asleep during vibration through a simple form of learning called habituation.

"Babies like to be rocked to sleep, but the neural mechanisms underlying this well-known phenomenon remain largely a mystery. We wanted to establish the fruit fly as a model system to study the mechanisms of sleep induction by mechanical stimulation," says the senior author on the study.

The researchers found that flies sleep longer during vibration and are less responsive to light pulses that would otherwise wake the flies. Also, they are more awake after vibration, suggesting they have accumulated "sleep credit." In other words, they act as if they slept more than they need to during vibration, which allows them to function well with less sleep afterward.

These findings suggest that vibration-induced sleep is similar to regular sleep and serves some of their vital functions. They found that how much extra sleep flies get during vibration depends on the flies' genetic background as well as the vibration frequency and amplitude. The group also learned that multiple sensory organs are involved in the process.

Interestingly, vibration initially makes flies more active than usual, but gradually puts them to sleep. Also, the ability to go to sleep improves when exposure to vibration is repeated several times, implicating habituation, a form of simple learning. "Flies learn over time that vibration is not threatening, which lowers their reaction to stimulation that would otherwise make them alert," says the senior author. Suppression of alertness appears necessary for vibration-induced sleep because mutant flies with increased dopamine levels that make them more alert do not fall asleep with vibration. Vibration-induced sleep leads to increased homeostatic sleep credit and reduced arousability, and can be suppressed by heightened arousal or reduced GABA signaling.

It is yet unclear whether similar mechanisms are at work in humans. But the senior author says, "further investigation may help us develop and optimize sensory stimulation as a sleep aid for humans. Our findings suggest it would be worthwhile to personalize the stimulus parameters for each individual over several sessions."

However, the team's initial goals are to learn more about the underlying neural mechanisms using the fruit fly as a model system. They plan to identify specific neurons in the fly brain involved in the process and determine whether vibration-induced sleep functions like normal sleep to enhance memory and longevity and whether repetitive stimulation of other senses (e.g., sight and smell) can also induce sleep.