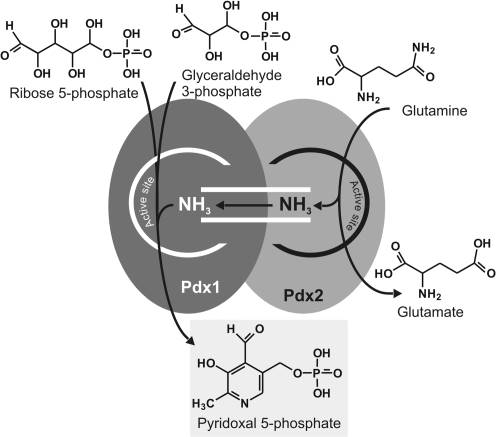 In many tropical countries, particularly in sub-Saharan Africa, cassava is one of the most important staple foods. People eat the starchy storage roots but also the leaves as a vegetable. Both have to be cooked first to remove the toxic cyanide compounds that cassava produces.

But the roots have a disadvantage: although rich in calories, in general they contain only few vitamins. Vitamin B6 in particular is present in only small amounts, and a person for whom cassava is a staple food would have to eat about 1.3 kg of it every day for a sufficient amount of this vital vitamin.

Vitamin B6 is a mixture of three similar molecules, namely pyridoxol, pyridoxine and pyridoxamine. These are the precursors of pyridoxal phosphate, one of the most important co-enzymes in the body involved in the assembly and modification of proteins.

The human body cannot produce vitamin B6, which is why it must be supplied with the food. A high vitamin B6 content is found in soya beans, oats, beef liver and brown rice, for example. Avocados, nuts and potatoes are also good sources. The daily requirement of an adult is approximately 1.5 mg to 2 mg.

Plant scientists set out to find a way to increase vitamin B6 production in the roots and leaves of the cassava plant and their results are published in the journal Nature Biotechnology.

Scientists discovered the biosynthesis of vitamin B6 in the model plant thale cress (Arabidopsis thaliana). Two enzymes, PDX1 and PDX2, are involved in the synthesis of the vitamin. With the introduction of the corresponding genes for the enzymes, into the cassava genome, the researchers produced several new cassava lines that had increased levels of vitamin B6.

Measurements of the metabolites confirmed that cassava lines produced several times more vitamin B6 in both roots and leaves than normal cassava. The researchers also attributed the increased production to the activity of the transferred genes, regardless of whether the plants were grown in a greenhouse or the field. The increased vitamin B6 trait remained stable even after the cassava was multiplied twice by vegetative propagation.