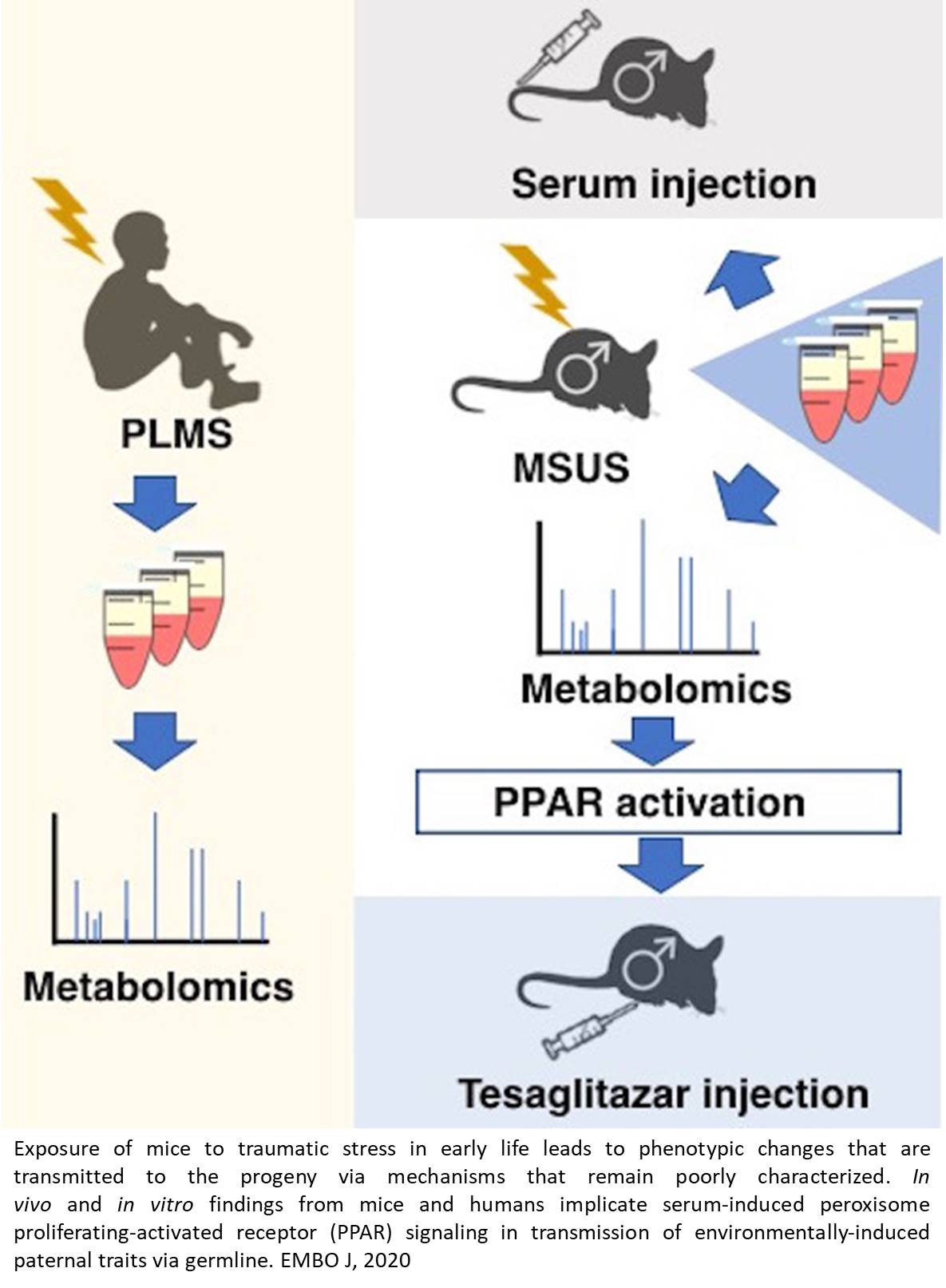 People who live through traumatic experiences in childhood often suffer long-lasting consequences that affect their mental and physical health. But moreover, their children and grand-children can also be impacted as well. In this particular form of inheritance, sperm and egg cells pass on information to offspring not through their DNA sequence like classical genetic heredity, but rather via biological factors involving the epigenome that regulates genome activity. However, the big question is how the signals triggered by traumatic events become embedded in germ cells.

"Our hypothesis was that circulating factors in blood play a role," says the senior author. The team demonstrated that childhood trauma does have a lifelong influence on blood composition and that these changes are also passed to the next generation. "These findings are extremely important for medicine, as this is the first time that a connection between early trauma and metabolic disorders in descendants is characterized," explains the author.

In the study, the authors used a mouse model for early trauma that had been developed in her lab. The model is used to study how the effects of trauma in early postnatal life on male mice are transmitted to their offspring. To determine whether these early experiences have an impact on blood composition, the researchers conducted multiple analyses and found large and significant differences between blood from adult traumatized animals and blood from normal, non-traumatized control group.

Changes in lipid metabolism were particularly striking, with certain polyunsaturated fatty acids metabolites appearing in higher concentrations in the blood of traumatized male mice. These same changes were also observed in their offspring. Even more strikingly, when the serum of traumatized males was chronically injected into non-traumatized males, their offspring also developed metabolic symptoms of trauma - providing a direct link between circulating factors and germ cells, thus confirming the hypothesis that blood delivers stress signals to the gametes.

The researchers then investigated whether similar effects are present in humans. For this, they assembled a cohort of 25 children from an SOS Children's Village in Pakistan who have lost their father and were separated from their mother, and analyzed their blood and saliva. When compared with children from normal families, the orphans showed higher level of several lipid metabolites - just like the traumatized mice.

"These children's traumatic experiences are comparable to those in our mouse model, and their metabolism show similar changes in blood," explains the author. "This demonstrates the importance of animal research for providing us with fundamental insights into human health." Up to one fourth of children across the world experience violence, abuse and neglect, that can lead to chronic diseases later in their life, highlighting the importance of the research.

Further experiments led the team to discover a molecular mechanism by which lipid metabolites can transmit signals to animals' germ cells. PPAR, a receptor at the surface of cells, plays a key role in this process; it is activated by fatty acids and regulates gene expression and DNA structure in numerous tissues. The researchers discovered that this receptor is upregulated in the sperm of traumatized males.

Artificially activating this receptor in male mice led to lower body weight and disturbances in glucose metabolism - an effect that was also seen in their offspring and grand-offspring. These and other experiments led researchers to conclude that PPAR activation in sperm cells plays a significant role in the heritability of metabolic dysfunctions caused by traumatic experiences in ancestors.

"Our findings demonstrate that early trauma influences both mental and physical health in adulthood and across generations, which can be seen in factors like lipid metabolism and glucose levels," says the author. "This is rarely taken into consideration in clinical settings." Improving the understanding of the underlying biological processes could help medical practitioners prevent the late-onset consequences of adverse life experiences in their patients in the future.