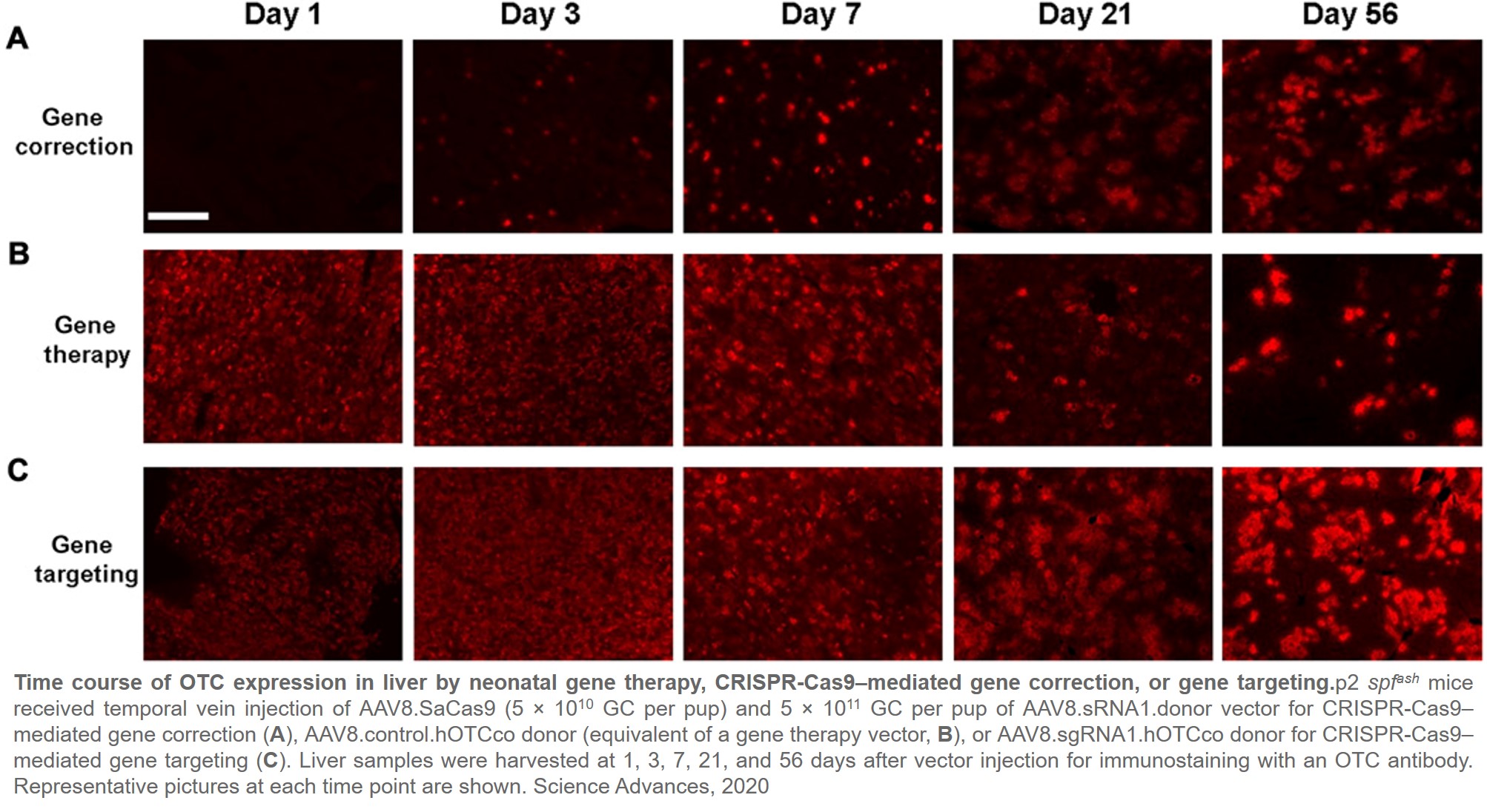 A new CRISPR gene-editing technique prevented a genetic liver disease known to be driven by hundreds of different mutations and improved clinical symptoms in mice, researchers reported in new proof-of-concept study published in Science Advances. The findings suggest a promising CRISPR tool that could potentially treat patients with a rare metabolic urea-cycle disorder caused by a deficiency the enzyme, ornithine transcarbamylase (OTC), as well as other hereditary diseases triggered by different mutations on the same gene.

The CRISPR approach builds off a previous one developed which was limited to correcting only one mutation - it benefitted newborn mice but not adults. This time, the technique--which employs a novel, dual adeno-associated virus (AAV) to deliver its components--inserted a "minigene" into the genome to accomplish a sustained expression of OTC in the liver cells, in what is known as a "cut" and "paste" approach. No mutations are corrected, rather a new set of instructions are added to the cells. As a result, researchers observed a clinical benefit in newborn mice that sustained into adulthood.

"Like most genetic diseases that present lethal effects in newborns, early treatments that are effective for the long term are essential," said the senior author. "Here, we moved a CRISPR approach forward to not only sustain expression of OTC in the cells but also broaden the tool's abilities. Our goal is to eventually translate this gene-editing approach from animals to treat patients with OTC disorders and other genetic diseases caused by mutations scattered throughout the gene--rather than a single, predominant mutation."

Found in nearly one in 40,000 births, OTC disorder can stem from more than 300 different mutations on the OTC gene. Since those mutations occur on the X chromosome, it's typically found in males, while females are carriers. The urea cycle is a series of six liver enzymes that help rid the body of ammonia. When one of these enzymes is missing or deficient, ammonia accumulates in the blood and travels to the brain, which can cause brain damage and even death. To treat the disease, patients take medicines to stimulate alternate nitrogen clearance pathways, or in severe cases, a liver transplant. However, mortality in these patients is still high, thus there is a need for newer, more effective therapies.

To develop a broadly applicable genome-editing tool, the team constructed a new, dual AAV vector containing an RNA-guided bacteria protein known as Cas9--a quick and reliable method to find and manipulate genes in cells. Known as AAV8, this vector specifically has an affinity for liver cells. The second AAV contained a fully functioning "minigene" expressing a codon-optimized human OTC--the donor DNA--driven by a liver-specific promoter to ensure it only expresses in liver cells when injected into the blood.

The first step is the creation of a break in the DNA by Cas9 at the targeting site along the gene (the "cut"), which sets the stage for the addition of the minigene in what is termed homology directed repair, or HDR (the "paste").

"Unlike other CRISPR approaches that delete or modify a portion of the normal gene, this technique integrates a new portion," said first author. "We're not trying to correct mutations that stop liver cells from producing OTC, we're adding this new minigene so the cells can."

Mice treated with the targeted vector showed 25 and 35 percent of OTC-expressing cells in the liver at three and eight weeks, respectively--which is four- and three-fold higher than the mice treated with the untargeted vector. At both time points (three and eight weeks), most OTC-positive liver cells were located in clusters scattered throughout all portions of the liver in the targeted mice.

Researchers also observed a 60 percent reduction in ammonia levels in targeted mice compared to untreated mice fed on a high protein diet, a clinical sign that suggests the liver cells are producing OTC.

"With these successful animal studies, we've moved closer to a potential 'broad spectrum' gene-editing approach to treat patients with the OTC deficiency, irrespective of mutation and clinical state," the senior author said. "The next step, through additional preclinical studies, is to find a safe harbor site on the gene in human liver cells and then to test a similar gene-editing approach."