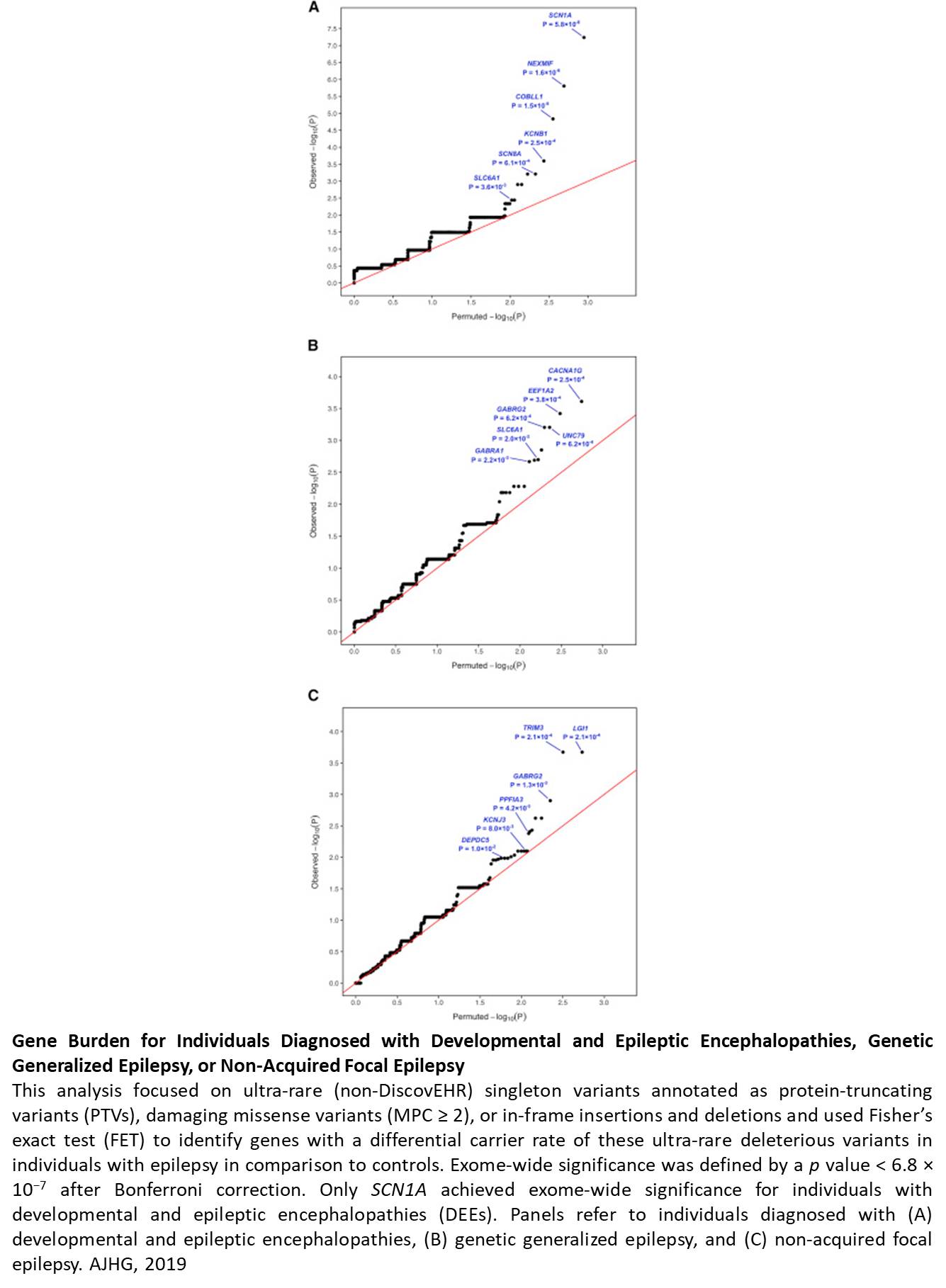 Epilepsy is one of the most widespread neurological disorders, but relatively little is known about the genes involved in the more common types. By examining all the genes of over 17,000 people, an international research group has found that more and less severe forms of epilepsy may share similar genetic features.

The findings, reported in the American Journal of Human Genetics, support the involvement of genes previously associated with epilepsy, including those that help keep the brain's electrical activity in check and others that help generate electrical signals in nerve cells.

This study comes from the Epi25 Collaborative, a group of over 200 researchers around the world seeking to better understand the genetics of epilepsy. Summary data from the study are publicly available online in the Epi25 WES browser, enabling other scientists to use it for further research.

There are different forms of epilepsy, including developmental and epileptic encephalopathies (DEE), which are more severe and account for a small percentage of cases, and genetic generalized epilepsy (GEE) and non-acquired focal epilepsy (NAFE), which are less severe and each account for 20 percent to 40 percent of cases.

While prior studies have identified gene variants that play a role in severe forms of the disorder, not much is known about how DNA variants contribute to more common types.

"The degree to which a similar pattern of genetic risk exists across the epilepsy spectrum has been an open question," said  a senior author on the study. "This was one of the earliest opportunities to take a systematic view and explore the extent to which we see consistent gene association and genetic risk across epilepsy subtypes.”

To study this, scientists in the collaborative collected DNA samples and clinical data from 9,170 people with DEE, GEE, or NAFE, and an additional 8,436 people without epilepsy, all primarily of European descent. The 17,606-person cohort is five times larger than those of previous studies that sequenced the protein-coding regions of the genome, or exome, of epilepsy patients.

As part of the National Human Genome Research Institute’s Centers for Common Disease Genomics program, researchers sequenced each participant's exome at the Broad Institute’s Genomics Platform and compared the sequences to look for very rare genetic variants that might be linked to a higher risk of epilepsy. Rare variants tend to have a bigger impact on disease risk compared to more common ones, but aren’t well-studied because large numbers of study participants are needed to find the rare variants.

Looking at genes previously implicated in epilepsy and neurodevelopmental disorders, the researchers found rare problem-causing variants that were associated with all three forms of epilepsy. In both previously-implicated genes and novel genes that surfaced in the study and are highly expressed in the brain, the researchers detected possible associations with all three subtypes, particularly with genes in the GABAergic pathway (which helps keep the brain's electrical activity in check) and genes encoding ion channels (which help generate the electrical signals in nerve cells). The authors said new drugs could potentially target ion channels or the GABAergic pathway, but more research is needed to confirm their involvement.

Current medications for epilepsy are not effective for about 30 percent of all patients. Knowing which genes are involved could aid the development of precision medicine strategies that work for a larger proportion of epilepsy patients, the authors said. But before this can happen, even larger studies with more participants are needed.

“For definitive, clinically meaningful effects, the collaborative would have to study at least 8,000 individuals with common forms of epilepsy and 20,000 controls,” said the lead author. The collaborative is now well underway to double the size of the study next year and include people from diverse genetic backgrounds.

“I think there is an opportunity for more personalized treatments for epilepsy patients based on genetic findings, and we hope to prove the significance of some of these genes with the next study so that new treatments can start to become a reality,” the lead said.

Hydrogen peroxide-sensor to detect the effectiveness of cancer therapy