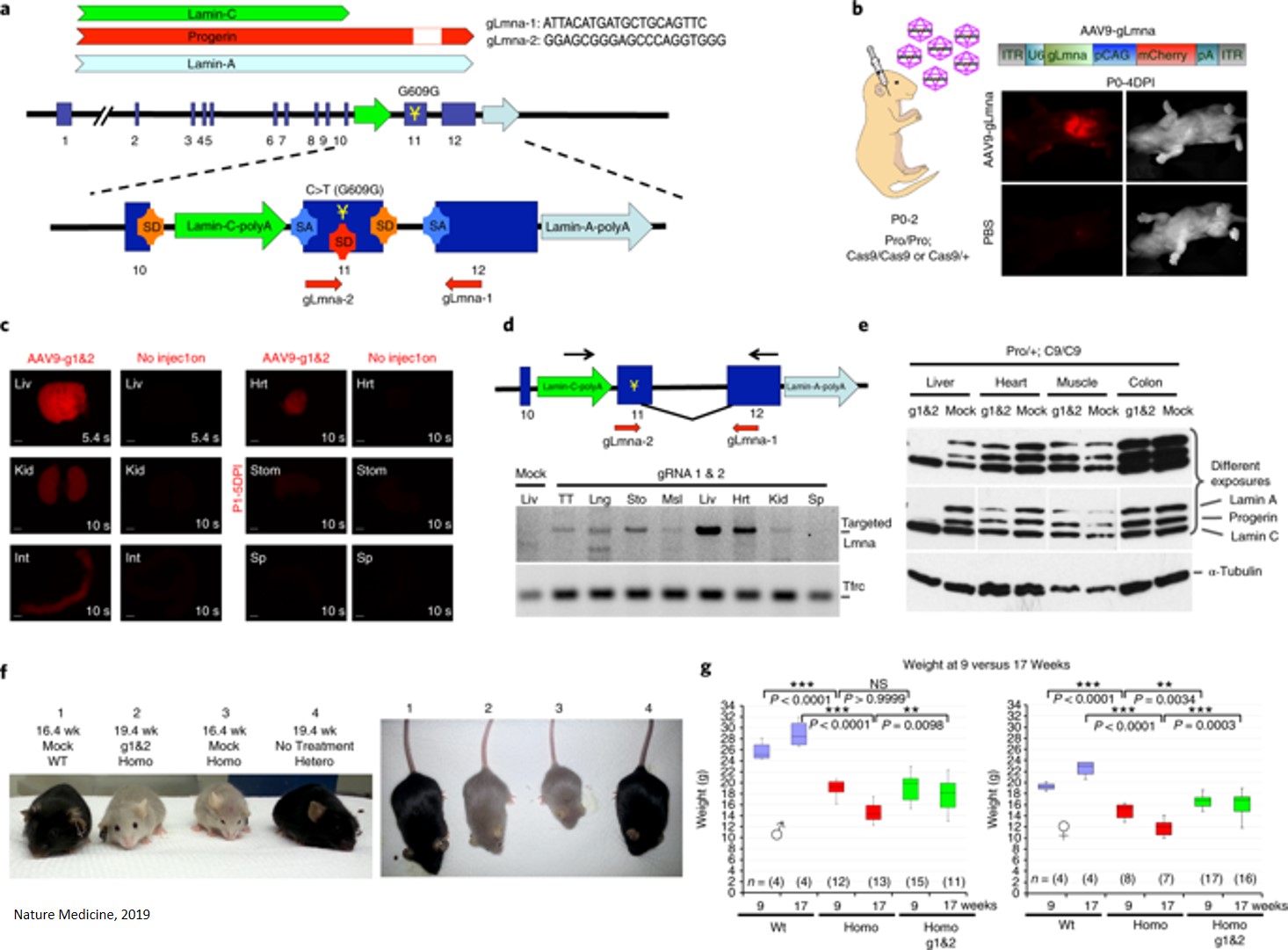 Aging is a leading risk factor for a number of debilitating conditions, including heart disease, cancer and Alzheimer's disease, to name a few. This makes the need for anti-aging therapies all the more urgent. Now, researchers have developed a new gene therapy to help decelerate the aging process.

The findings, published in the journal Nature Medicine, highlight a novel CRISPR/Cas9 genome-editing therapy that can suppress the accelerated aging observed in mice with Hutchinson-Gilford progeria syndrome, a rare genetic disorder that also afflicts humans. This treatment provides important insight into the molecular pathways involved in accelerated aging, as well as how to reduce toxic proteins via gene therapy.

With an early onset and fast progression, progeria is one of the most severe forms of a group of degenerative disorders caused by a mutation in the LMNA gene. Both mice and humans with progeria show many signs of aging, including DNA damage, cardiac dysfunction and dramatically shortened life span. The LMNA gene normally produces two similar proteins inside a cell: lamin A and lamin C. Progeria shifts the production of lamin A to progerin. Progerin is a shortened, toxic form of lamin A that accumulates with age and is exacerbated in those with progeria.

"Our goal was to diminish the toxicity from the mutation of the LMNA gene that leads to accumulation of progerin inside the cell," says co-first author. "We reasoned that progeria could be treated by CRISPR/Cas9-targeted disruption of both lamin A and progerin."

The researchers utilized the CRISPR/Cas9 system to deliver the gene therapy into the cells of the progeria mouse model expressing Cas9. An adeno-associated virus (AAV) was injected containing two synthetic guide RNAs and a reporter gene. The guide RNA ushers the Cas9 protein to a specific location on the DNA where it can make a cut to render lamin A and progerin nonfunctional, without disrupting lamin C. The reporter helps researchers track the tissues that were infected with the AAV.

Two months after the delivery of the therapy, the mice were stronger and more active, with improved cardiovascular health. They showed decreased degeneration of a major arterial blood vessel and delayed onset of bradycardia (an abnormally slow heart rate)--two issues commonly observed in progeria and old age. Overall, the treated progeria mice had activity levels similar to normal mice, and their life span increased by roughly 25 percent.

"Once we improve the efficiency of our viruses to infect a wide range of tissues, we are confident that we will be able to increase life span further," says an author of the paper.

Taken together, the results suggest that targeting lamin A and progerin using a CRISPR/Cas9 system can dramatically improve the physiological health and life span of progeria mice. These results provide a significant new understanding of how scientists may eventually be able to target molecular drivers of aging in humans.

Future efforts will focus on making the therapy more effective and will refine it for human use. Currently, there is no cure for progeria, so the symptoms are managed and complications are treated as they arise.

"This is the first time a gene editing therapy has been applied to treat progeria syndrome," says the senior author. "It will need some refinements, but it has far fewer negative effects compared to other options available. This is an exciting advancement for the treatment of progeria."