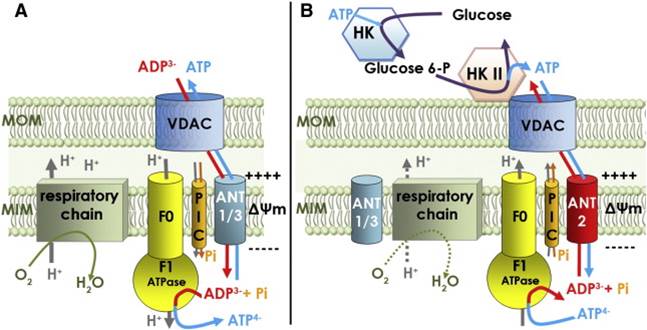 Mutations in the gene that encodes a protein called adenine nucleotide translocator (ANT) cause a variety of conditions, such as heart disease and weakness of the eye muscles, but the underlying mechanism of how these mutations trigger disease has been unclear. Now, researchers discovered that ANT is critical for a quality control process called mitophagy--which helps to ensure the integrity of the mitochondria network by removing damaged mitochondria--and found that mutations that lead to a defective quality control system ultimately cause heart disease.

The findings, published in Nature, reveal the new and surprising function of ANT, a well-known protein that also contributes to the mitochondria's ability to produce the chemical energy, or adenosine triphosphate (ATP), needed to fuel the body's cells. Although it's been known the mutations in the ANT gene cause diseases, including cardiomyopathy--a disease that makes it harder for one's heart to pump blood to the rest of the body--research has shown that the mutations do not impact ANT's ability to produce chemical energy, raising questions about how one would then get a disease.

"In revealing the link between ANT and mitophagy, and the impact mutations have on quality control, our findings change the way we think about the disease-causing mutations and enable us to focus our attention on the right pathway," said the study's corresponding author. "Now that we know these diseases are caused by defective quality control rather than a lack of ATP generation, we can start thinking about therapeutic approaches that improve the quality control."

Mitochondria, known as the powerhouse of the cell, generate most of the ATP needed to fuel body's cells and play an important role in high-energy demanding organs, including the heart and liver. Quality control mechanisms, including mitophagy--which often occurs to defective mitochondria following damage or stress--help to ensure the mitochondrial network functions properly. Although the role of mitophagy has been established, there has been limited information, until now, about the different proteins that participate in mitophagy.

To gain a deeper understanding of the components involved in mitophagy, the team of researchers conducted a CRISPR/Cas9 genome-wide screening, using multiple reporter systems and pro-mitophagy triggers. To their surprise, they found that ANT is required for the quality control pathway of mitophagy in a number of cell types. In follow-up tests to confirm their findings, researchers found that ANT promotes mitophagy independent of its role in producing ATP, showing that the protein has two distinct jobs.

Upon that revelation, the researchers designed tests to investigate whether mutations in the genes of ANT affected mitophagy. They found that disease-causing mutations in ANT cancel its ability to bind with complexes of proteins that are required for proteins to relocate from the inner-membrane into the mitochondrial matrix, ultimately inhibiting mitophagy. Further studies showed that the genetic removal of ANT suppresses mitophagy. Researchers also found that mice genetically lacking ANT had blunted mitophagy and experienced a profound accumulation of atypical mitochondria.

"We were extremely surprised to find that ANT participates in mitophagy, revealing that it has two separate functions--ATP generation and quality control," the author said. "While there's no magic bullet for improving the quality control process, we hope our findings lay the groundwork for future efforts that examine how to offset the suppression of mitophagy and, ultimately, prevent these mutations from causing disease."

An epigenetic, universal, nano-signature for cancer